On offense, only one player with starting experience is gone from last season's team, but that one departure creates a fairly significant hole. 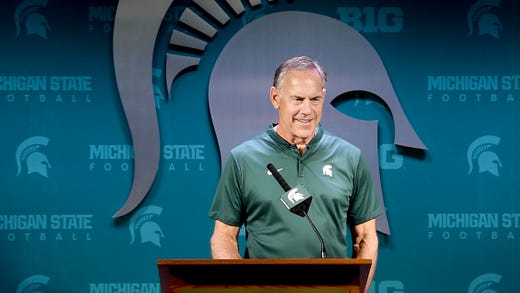 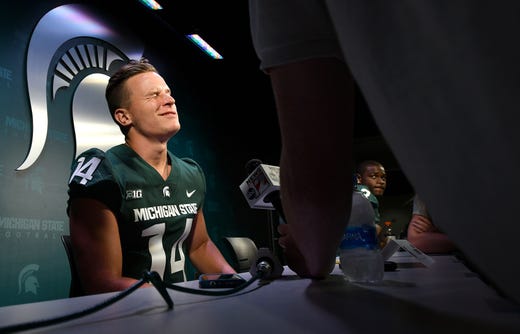 Everything was going fine for quarterback Brian Lewerke until some reporter asked him about his golf game. Dale G. Young, Detroit News
Fullscreen 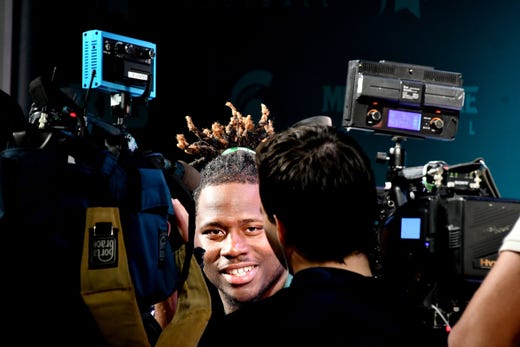 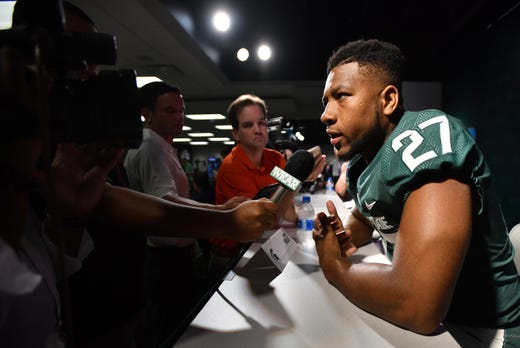 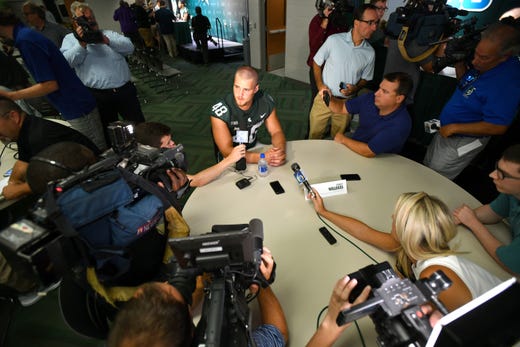 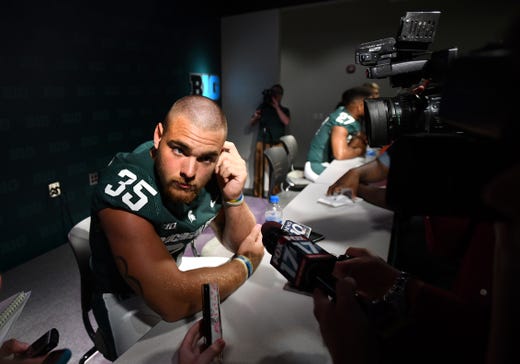 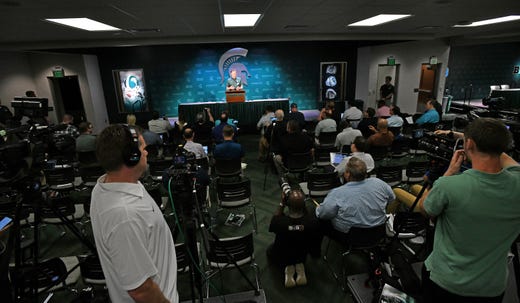 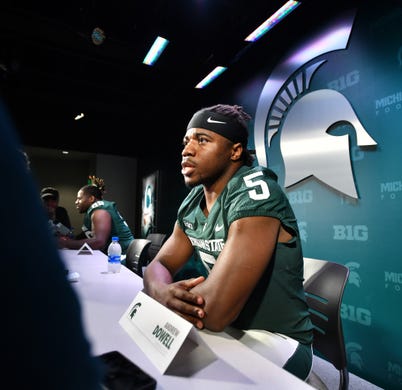 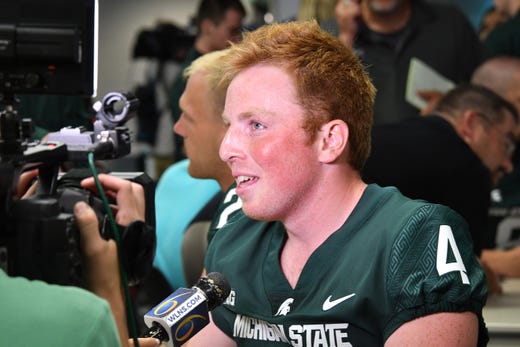 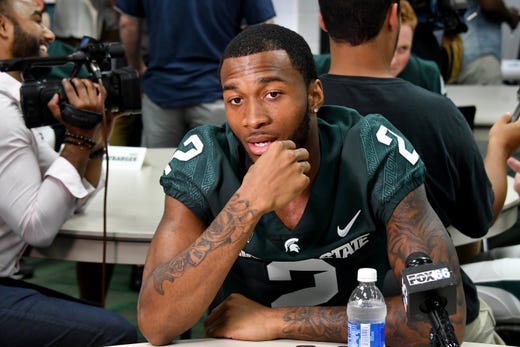 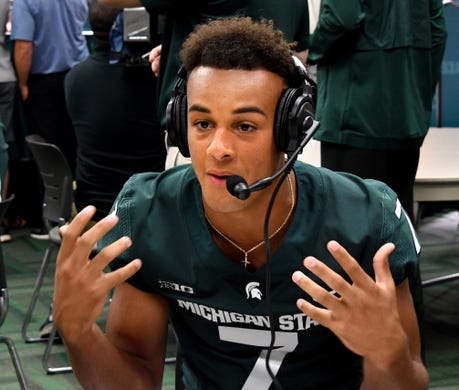 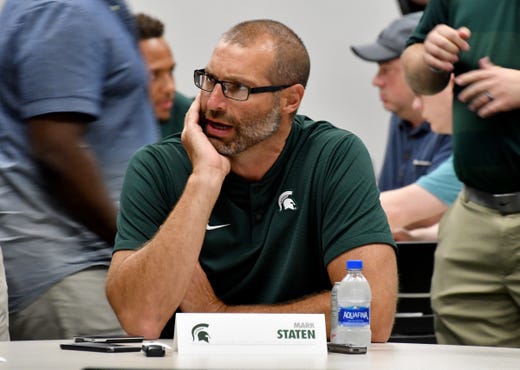 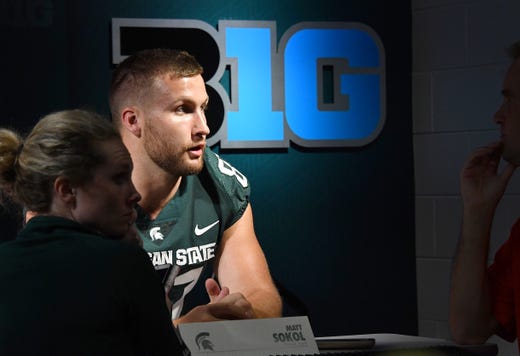 Tight end Matt Sokol has the conference logo over his shoulder as he talks with a reporter. Dale G. Young, Detroit News
Fullscreen 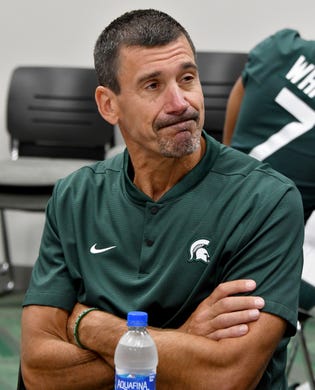 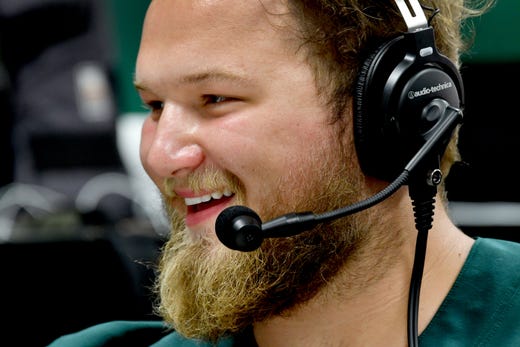 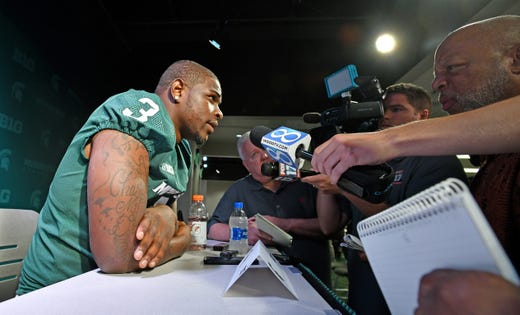 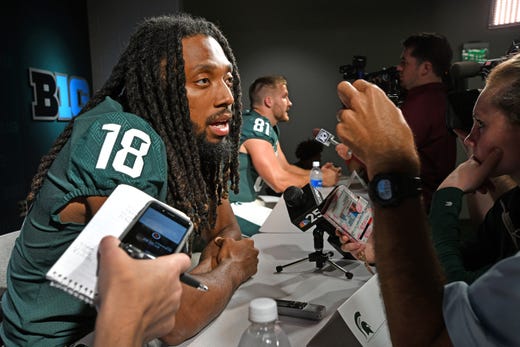 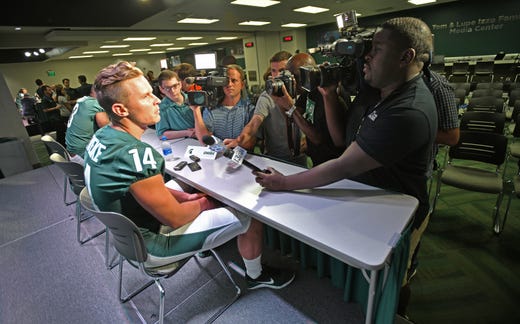 As you might expect for a starting quarterback, Brian Lewerke was mobbed by the media at Michigan State's annual football media day on Aug. 6, 2018, at Spartan Stadium in East Lansing. Dale G. Young, Detroit News
Fullscreen 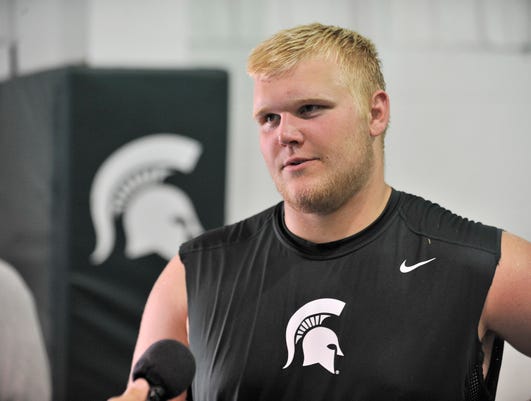 East Lansing — Lack of experience won’t be a problem this season at Michigan State.

Only three players with starting experience are gone from last season's team that won 10 games, capping a dramatic turnaround from the three wins in 2016. On offense, that number is just one, but that one departure creates a fairly significant hole.

No, it’s not the quarterback, but it’s arguably the second-most important position — center.

Gone is Brian Allen, who played in 51 career games and was a second-team All-Big Ten honoree for three straight seasons. And while it might not draw the attention that a full-fledged quarterback battle would, determining who takes over for Allen might be the most important development of the Spartans’ preseason camp.

“I’d love for one guy to grab it,” offensive line coach Mark Staten said. “We’ve got some guys battling for it right now, and until that scrimmage comes up later this week and the bullets are really flying … that scrimmage comes and that’s when you’re tackling to the ground — we’ll have some live periods before then — but I’ll be interested to see after that day where we are.”

The line, as a whole, is full of experience and versatility that should aid in figuring out who steps in as the starting center. Staten has developed a routine of using seven to eight players a game with many rotating positions.

That’s evident in this month’s fight to be the starting center. Sophomore Matt Allen and junior Tyler Higby are getting most of the work while fifth-year senior David Beedle is taking some reps, as is redshirt freshman Blake Bueter.

Higby and Beedle have played mostly at guard while Bueter is a walk-on who is quickly establishing himself.

“Right now Tyler Higby and Matt are probably working with the ones and the twos,” coach Mark Dantonio said. “Bueter has been a surprise. He's a redshirt freshman, and then you've got David Beedle messing around in there a little bit, as well, so we'll see how he's coming.

“Really, it's Higby and Matt, and Higby has got a little bit more experience. We'll see what Matt does. What he has to do is not make mistakes, play at the point of attack, which is difficult to do at times. You know, we've got good defensive players, as well, but they have just got to continue to grade out the best, and we'll make a decision as camp goes throughout the process.”

Higby will push and has the experience, though it’s not at center. He’s played in 22 career games, starting 13 times at left guard.

More: MSU's Williams wants to use his adversity to motivate teammates

Add in Beedle, who’s played both guard and tackle and is on the Outland Trophy watch list. He’ll most likely hold down the left guard spot this season, but having the ability to move over to center is something he’s working on in preseason camp.

“(Practice) is different every day, really,” Beedle said. “I’ve been practicing, definitely, and learning the quarterback-center exchange. I’m always over there working with snapping and footwork. It varies every day, but I’m just trying to prepare myself if I do need to play.”

While the center spot is the biggest unknown up front, establishing the playing group is Staten’s goal over the next few weeks.

Junior Cole Chewins and sophomore Luke Campbell are established tackles while sophomore Jordan Reid will continue to push for time. Beedle and sophomore Kevin Jarvis are the starting guards, but with young players like Mustafa Khaleefah, AJ Arcuri and Matt Carrick seeking larger roles, the competition will continue to be stiff.

“Across the board,” Staten said of the position battles. “Cole Chewins has played the most snaps for us last year but if he feels the heat on the back of his neck, he’s got to elevate his game. He’s got to, every day, get better. It could be a practice-to-practice thing.

“But we’re not gonna make any wholesale changes until after the first scrimmage (on Friday). But they’re all getting reps at different positions so should they show they deserve to be in the first group, then that will be after that first scrimmage.”