MSU mailbag: Backups who stack up at running back

In this week’s Michigan State mailbag, we talk a lot about backup running back and who will play defensive end opposite Kenny Willekes.

MSU mailbag: Backups who stack up at running back 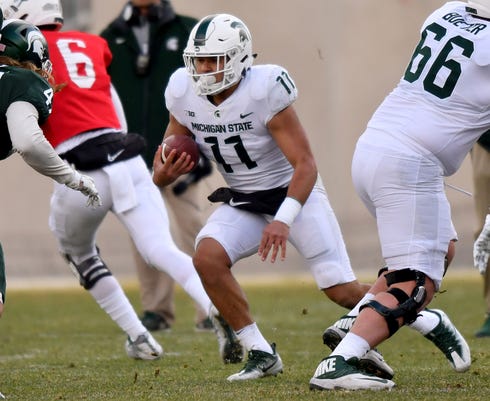 Connor Heyward, who will be LJ Scott's backup at running back, can fill a variety of roles for Michigan State.(Photo: Dale G. Young, Detroit News)

The season kicks off next Friday, and the expectations are high for Michigan State.

With 19 returning starters to a team that won 10 games in 2017, the belief is the Spartans will be in the mix to win the Big Ten East and return to the conference championship game.

With that many starters back, there aren’t a lot of positions to wonder about. However, that doesn’t mean there aren’t questions. In this week’s mailbag, we talk a lot about backup running back and who will play defensive end opposite Kenny Willekes.

■ Question: I have concerns that Connor Heyward will be passed up by La’Darius Jefferson by next season as the starting running back once LJ leaves. What do you see as Heyward’s long-term permanent position to stay on the field? — @Timo_Slice

■ Answer: If the concern is that Heyward would somehow get passed over as the starting tailback and then now contribute to the offense, then you should rest easy. The coaching staff has high hopes for Heyward, but as importantly, they see him being the type of player who can contribute in many different ways. That shouldn’t be a surprise considering the way he was used in a limited role last year as a true freshman. Even if someone like La’Darius Jefferson or Weston Bridges or Elijah Collins becomes the No. 1 back, that won’t mean Heyward will take a back seat. Expect him to not only get his share of carries, but plan on him catching the ball out of the backfield, playing in the slot, carrying the ball on jet sweeps and even being someone who can throw the ball.

Ironically, Jefferson has a lot of the same qualities after playing quarterback at Muskegon. The bottom line — Michigan State will have its share of options in the backfield once LJ Scott moves on to the NFL, and some of those options will be clear this season. 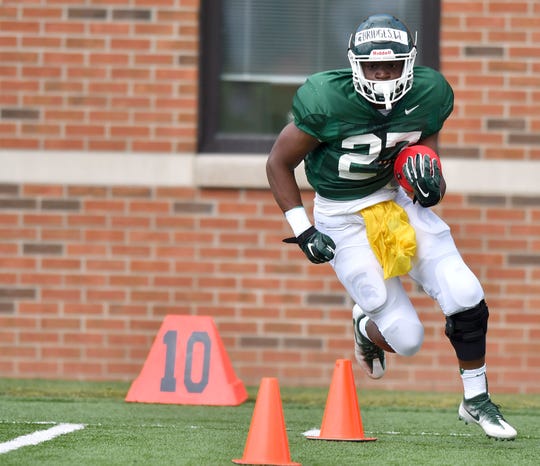 ■Q. RB — Scott, Heyward... then Bridges? How has he looked? — @SpartanCenterig

■A. I’m going to assume the question is focused on redshirt freshman Weston Bridges, considering he’s the one in that group who has yet to play in a game. Here’s the deal on practices at MSU — they don’t exactly let us see that much. Outside of individual drills and some very limited time running set offensive plays, we’re at the mercy of the coaches and other players to give us their impressions.

I’ll say this about Bridges — he has impressed his teammates, which is sometimes the best barometer. After the first scrimmage of preseason camp, both Brian Lewerke and Joe Bachie talked about how impressed they were with Bridges, and offensive coordinator Dave Warner said a couple of weeks ago that Bridges has the sort of burst to be a big-play type of runner. He’s healthy, for now at least, and that alone should provide plenty of optimism.

■Q. Has anyone seen Jack Camper or Jacub P(anasiuk) in practice or scrimmages?  Will these guys be able to provide a consistent pass rush opposite Willekes?  If so, this defense can be dominant. — @SaleemSiddiqi1

■A. Again, we haven’t seen any of the scrimmages. That’s standard practice for Mark Dantonio. However, defensive coordinator Mike Tressel did single out both Panasiuk and Camper as defensive ends who stood out in the second scrimmage. Panasiuk has the edge on experience after playing last season as a true freshman, but Camper is continuing to push after coming to MSU as a tight end and redshirting last season.

Camper switched to defensive end near the end of last season and focused on that spot in the spring. He’s still learning the ropes, but Tressel said early this week that the 6-foot-4, 250-pounder can become an “impact-type of guy.” 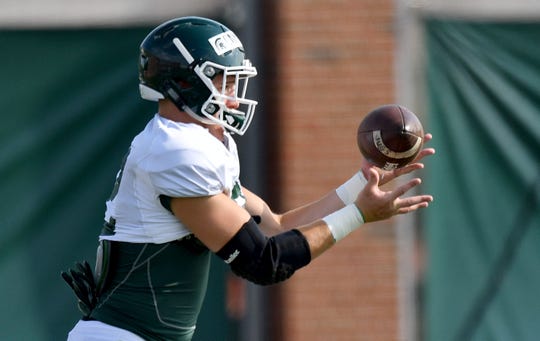 ■A. An extension of the previous question, it’s clear that junior Kenny Willekes has established himself as one of the more effective pass rushers in the Big Ten. However, Michigan State is still looking to put more pressure on the passer after recording 28 sacks in 2017.

Whether that comes from the defensive end spot remains to be seen, but keep an eye on other ways to get after the quarterback, as linebacker Brandon Randle will continue to be a factor in certain packages and middle linebacker Joe Bachie said one of his main goals heading into the season is to make this linebacker crew the best blitzing group that has played at Michigan State.

■Q. How many yards passing for Lewerke? — @dluea

■A. It seems pretty safe to assume he’ll surpass the 2,793 yards he threw for in 2017, his first season as the full-time starter. Why? Well, one of the biggest reasons is he had a tendency to take off with the ball earlier than he needed to last season, though it typically resulted in big plays. That’s not bad, but he’s focused not only on his accuracy this offseason but being patient in the pocket.

Add in the fact he’s got a stable of weapons led by receivers Felton Davis, Darrell Stewart and Cody White, and it would be a surprise if Lewerke didn’t throw for more than 3,000 yards and be among the leaders in the Big Ten.

■Q. Let’s say offense and defense come out swinging vs Utah State. Is there a unit whose performance I should take as a harbinger of things to come more than the other? Conversely, let’s say the both look shaky. Who should I be more concerned about? — @brandonmanson

■A. Utah State is a bowl team from a season ago that returns its share of starters. That needs to be understood. So if either unit comes out and is running smoothly in the opener, I think it’s safe to take that as a good sign. That said, a shaky performance hardly guarantees a long season. I’m thinking of 2013 when MSU didn’t exactly dominate Western Michigan in the opener or South Florida the next week but might have been the best team in the nation by the end of the season.

Bottom line, I don’t think you’ll be concerned about the defense this season. The big question on offense is finding the consistency to dramatically improve on some statistics like points per game (24.5), which ranked 96th in the nation in 2017.