The NCAA absolving Michigan State University of violations in the sexual misconduct by former Dr. Larry Nassar and its football and basketball programs was welcome news for MSU athletic director Bill Beekman. 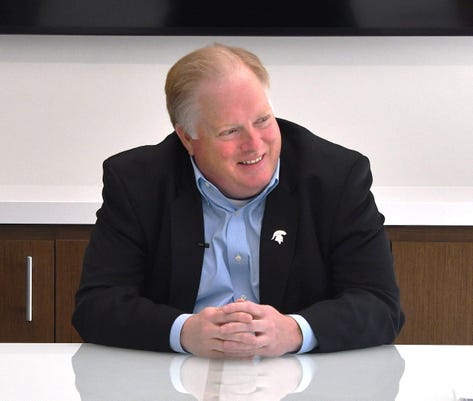 That the NCAA found no reason to continue investigating the football or men’s basketball programs  validated the university’s handling of those cases, Beekman told The Detroit News on Thursday.

“Over the last decade I feel very comfortable that we’ve trained very carefully and thoughtfully (on Title IX policy), and that our coaches have done a very good job of following that training and reporting as appropriate,” Beekman said.

Beekman said that internal and external investigations of the basketball and football programs arrived at the same conclusion:  "that Tom Izzo and Mark Dantonio followed the rules."

"How other entities could reach other conclusions escapes me. But I do think that for Tom and Mark it’s yet another signal that they did the right thing. It’s not really a surprise; it’s a validation of what we already knew.”

MSU announced the NCAA findings on the same day that former MSU gymnastics coach Kathie Klages was arraigned on charges that she lied to a peace officer in the Nassar investigation.

Nassar admitted to sexually abusing 10 female minors while an osteopathic doctor at MSU and USA Gymnastics, and possessing hordes of child pornography. Before judges gave him three prison sentences, more than 250 young women testified that he sexually abused them.

Michigan State has been at the center of the case and Beekman said it has allowed the university to redouble its efforts in student safety.

More: Nassar moves to a federal prison in Florida

"Anytime you discover that there’s a problem, large or small, you’re always sort of thinking about: How do we make things better, how do we do right by our student-athletes? I think the biggest challenge of the last number of months has been just sort of reassuring people, in large measure, reassuring people that we’re doing that,” said Beekman, who was named permanent athletic director on July 16, succeeding Mark Hollis, who stepped down in January.

Specifically, in athletics, Beekman highlighted several changes already taking place, including the opportunity for female student-athletes to be seen by female primary care physicians and implementing a chaperone program where trainers who have gone through patient advocate programs are available to accompany student-athletes to appointments.

“Our absolute first priority has to be the health, safety and wellness of our student-athletes,” Beekman said. “We’ve got to be laser-focused on making sure that every parent that drops off their young adult and puts them in our care can sleep at night knowing that we’re doing everything in our power to make sure that they have a positive experience and they’re safe and healthy.”

The fact Klages was facing charges relating to the Nassar case proves changes needed to be made at Michigan State, though Beekman wasn’t willing to go into much detail regarding the former gymnastics coach.

“I think the charges are being brought because she said one thing and student-athletes said something else,” Beekman said, “and that will work itself through the legal process.”

Klages stepped down in February 2017 after 27 years as MSU’s gymnastics coach after two former gymnasts filed lawsuits against MSU and other institutions, saying they had told Klages about Nassar 20 years earlier.

Larissa Boyce and another gymnast allege they reported Nassar’s sexual abuse to Klages in 1997, when they were high school gymnasts in a program at MSU. Both said Klages didn't believe them.

Despite those allegations, Beekman said following Title IX policy has always been an emphasis.

“That’s something that we train on ruthlessly,” Beekman said Thursday. “We train on it constantly and our Title IX folks, our Office of Institutional Equity, meets on a regular basis with our coaching staff, our athletic department; they’re scheduled to meet with me later today as part of my periodic training. So there really hasn’t been a whole lot different there and every time we’ve looked at when a student-athlete came in with an issue, let’s double-check when the coach or assistant coach or trainer was confronted with that issue: Did they follow the rules? Our training really has worked."

Now on the job a little less than two months, Beekman explained he understands many will judge him on football and men’s basketball wins and losses. However, he takes a broader approach to his success as an athletic director.

“What I’ve explained to our athletic department is that we need to make sure that all of our student-athletes have the ability to succeed in three areas – on the field of play, in the classroom and in life,” Beekman said. “My benchmark for my personal success is if in 10, 15, 20 years our student-athletes are being positive contributing members of their communities and making the world a better place.”