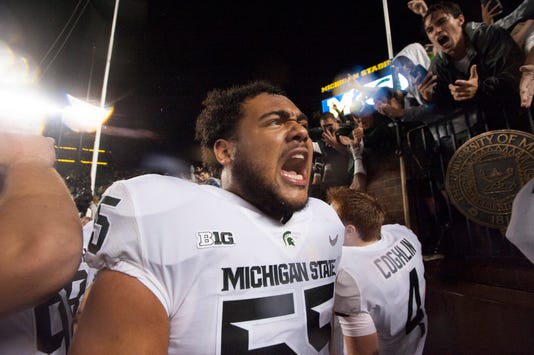 The Spartans lose just one starter from last year’s offense and it happens to be at the center position, one of the most important on the field. With Brian Allen off to the NFL, offensive line coach Mark Staten is sticking with his typical approach of rotating 6-8 players up front, though nailing down who will replace Allen has been the No. 1 goal throughout preseason camp. Junior Tyler Higby has the edge heading into the season ahead of sophomore Matt Allen, though expect both to get early playing time. Higby has the edge on experience having started 13 games at left guard while Allen played sparingly last season as a redshirt freshman. The rest of the line is in good shape with senior David Beedle and sophomore Kevin Jarvis manning the guard spots, and junior Cole Chewins and sophomore Luke Campbell at the tackles. Sophomore Jordan Reid will also see significant time with the ability to play multiple positions after playing primarily right tackle in 2017.

Brian Lewerke compiled nearly 3,400 total yards as a sophomore last season, his first as Michigan State’s full-time starting quarterback. He made most of his big plays early with his feet and finished the season with 559 yards rushing and five touchdowns. Consistency in the passing game was tougher to find as Lewerke completed 59 percent of his passes with 22 touchdowns and seven interceptions. However, there were flashes of greatness as Lewerke threw for more than 400 yards in two straight games, including four touchdowns against Northwestern. The Spartans are expecting a big jump from Lewerke and he spent the bulk of the offseason working to improve his accuracy and become a more consistent quarterback. With plenty of weapons at his disposal, even a moderate jump in accuracy could push Lewerke into the top tier of quarterbacks in the Power Five. 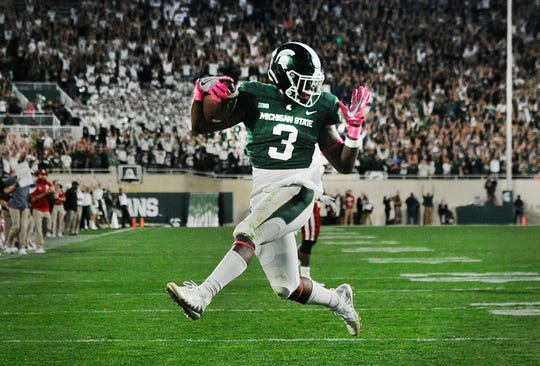 LJ Scott has been Michigan State’s top running back in each of his first three seasons, but he has yet to surpass 1,000 yards rushing. Many believe that true breakout will come this season after Scott decided to put the NFL on hold and return for his senior season. At times, Scott has shown he is one of the toughest backs in the Big Ten. It was on display his freshman season when he scored the winning touchdown in the Big Ten title game and against Minnesota last season, when he fell 6 yards short of 200. With the graduation of Gerald Holmes and the transfer of Madre London, there’s no more sharing carries for Scott, who should get the bulk of the work in a backfield lacking much experience. The Spartans are counting on Scott taking advantage and becoming the type of back Le’Veon Bell was in 2012, when Bell ran for 1,844 yards and 12 touchdowns. Scott won’t need to rack up those numbers for the Spartans’ offense to be effective but he’ll almost certainly see a surge in production if he gets significantly more carries than the 201 he had last season. 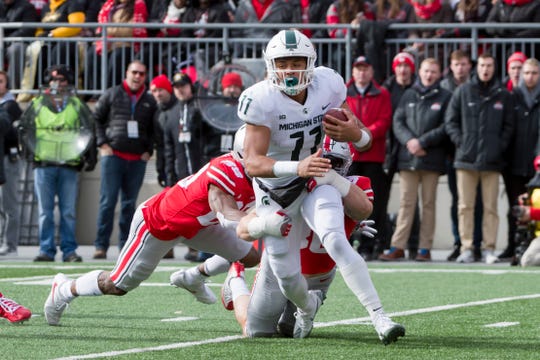 There will be plenty of attention on both Brian Lewerke and LJ Scott this season, and rightly so. But the Spartans have plenty of options on the offensive side of the ball, including a receiving corps that might be among the best in the conference. Senior Felton Davis (55), junior Darrell Stewart (50) and sophomore Cody White (35) combined for 140 receptions last season while Davis emerged as a red-zone weapon with nine touchdowns. Expect all three to build on last season’s numbers with sophomore Cam Chambers pushing for a bigger role, as well as sophomore Laress Nelson and redshirt freshman CJ Hayes. The Spartans will likely try and increase the production of their tight ends, as well. Fifth-year senior Matt Sokol is solid, but sophomore Matt Dotson and freshman Trenton Gillison could be difference-makers as soon as they become fluid in the offense. Add in versatile sophomore Connor Heyward, who will line up in multiple positions, and Lewerke and Scott have plenty of help.

As confident as the Spartans are heading into the season, the reality is they need to be far more productive than they were a season ago. In 2017, Michigan State scored 24.5 points a game, which ranked 96th in the nation, while averaging 383.1 yards a game, good for 91st in the country. Getting all but one starter back should go a long way in helping increase the production as Michigan State entered last season lacking in experience. Combined with a defense that should once again be among the best in the nation, even slight increases in points per game and yardage should result in a team that can play with any team in the country.