While there continues to be plenty of hand-wringing over Michigan State’s offense, similar fretting over the defense doesn’t seem to be a problem. 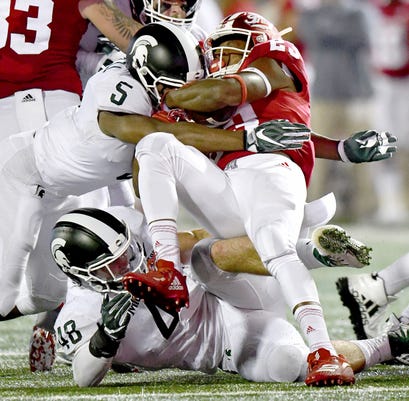 East Lansing — While there continues to be plenty of hand-wringing over Michigan State’s offense coming off a victory over Indiana in the Big Ten opener, similar fretting over the defense doesn’t seem to be a problem.

Sure, the Spartans gave up a 65-yard touchdown catch in the second half, but it was the only play allowed of 20 yards or more. And while Michigan State continues to dominate against the run, it allowed 272 yards in passing — its best showing of the season — while intercepting a pair of passes and getting two fourth-down stops.

In other words, the Michigan State defense, despite a couple of injuries, is jelling fairly quickly.

“The defense played very well,” Michigan State coach Mark Dantonio said during his weekly teleconference on Sunday evening. “We gave up one play over 20 yards, which is very difficult in modern-day football. We pressured the quarterback and basically had six sacks. We forced (the quarterback) out of the pocket many times and he was under duress. We stopped the run and made the game one-dimensional in that capacity.

“Then also two big fourth-down stops and out of a sudden change when they got the ball on the 7 and ultimately we played extremely well. Gave up the one big play which we’re disappointed in, but it happened.”

The sudden change came when Michigan State held Indiana to a field goal after quarterback Brian Lewerke was intercepted at the MSU 7 late in the third quarter. After an offensive pass interference nullified a touchdown, the Hoosiers had to settle for a field goal.

It’s the sign of a defense that doesn’t allow frustration to seep in despite some offensive struggles. Michigan State has had that with some of its past defenses, as well as being a force against the run. Moving the ball on the ground has always been a dicey proposition for opponents but it has been especially true this season. The Spartans (2-1, 1-0 Big Ten) allowed 29 yards rushing against the Hoosiers and limited freshman running back Stevie Scott to 18 yards on 11 carries after he ran for 204 two weeks ago.

“They were 3-0 and feeling good and rushed for like 200 yards the first three games,” linebacker Joe Bachie said. “We knew we had to stop the run and it’s something we pride ourselves on and we did a good job with that, so it was good to get the win.”

But stopping the run was expected from the Spartans. With a group of tackles like juniors Raequan Williams and Mike Panasiuk back along with Bachie in the middle, the unit that was second in the nation in run defense last season hasn’t missed a beat.

What was harder to predict was whether Michigan State would be able to pressure the quarterback. On Saturday, that part of the defense broke through as the Spartans were credited with four sacks and had Indiana’s Peyton Ramsey on the run for much of the game. 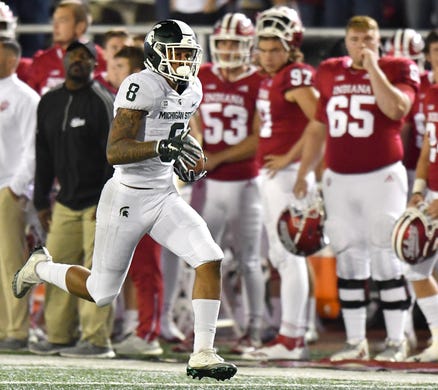 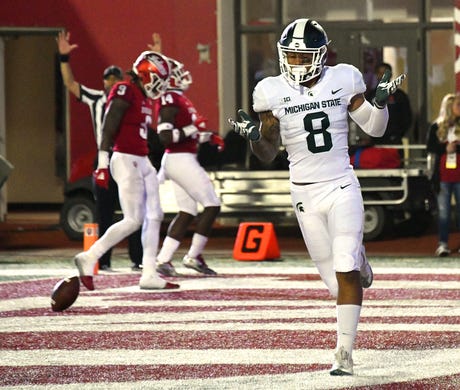 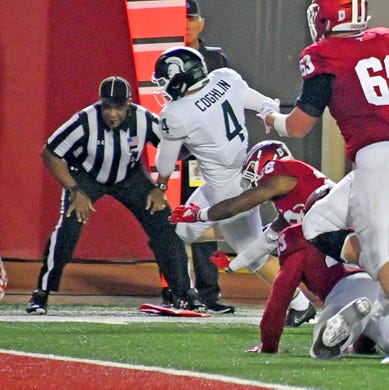 Kicker Matt Coghlin turns the corner and scores a touchdown on a trick play in the third quarter that began with quarterback Brian Lewerke holding for him. Dale G. Young, Detroit News
Fullscreen 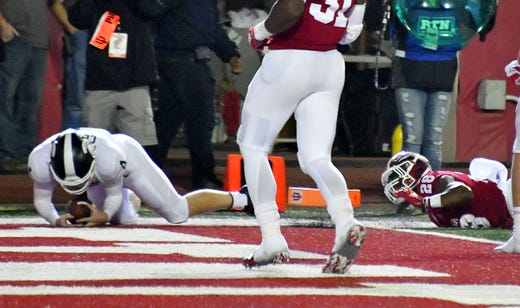 Kicker Matt Coghlin sprawls across the goal line for a touchdown on a trick play in the third quarter. Dale G. Young, Detroit News
Fullscreen 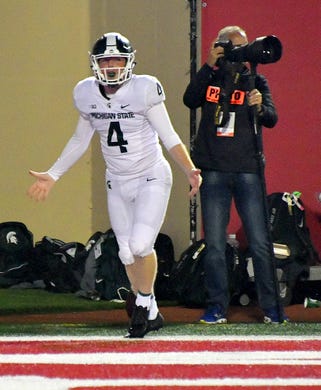 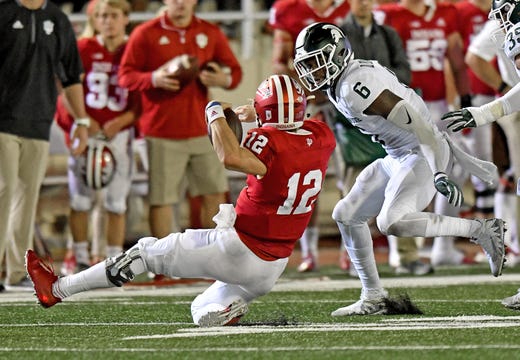 MSU's David Dowell forces Indiana quarterback Peyton Ramsey to take a dive and comes up short of a first down in the third quarter. Dale G. Young, Detroit News
Fullscreen 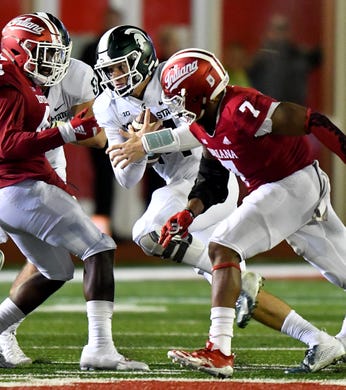 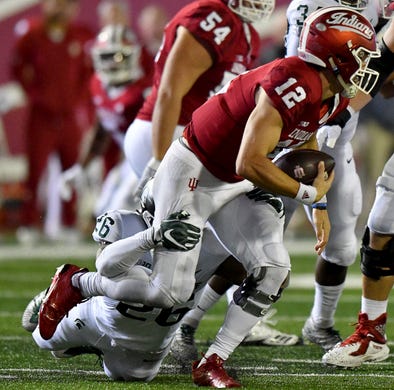 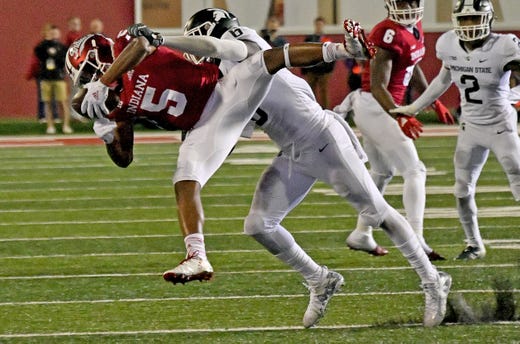 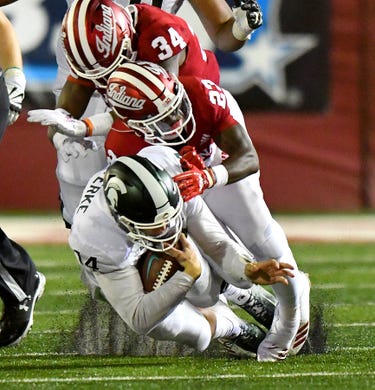 MSU's Brian Lewerke gets the first down and gets hit in the process during the fourth quarter. Dale G. Young, Detroit News
Fullscreen 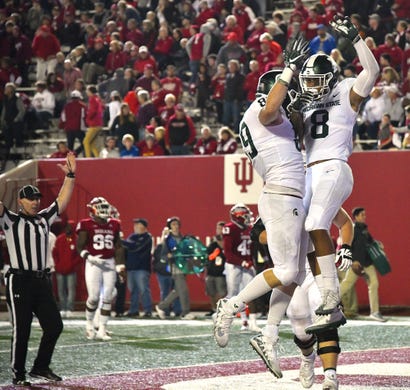 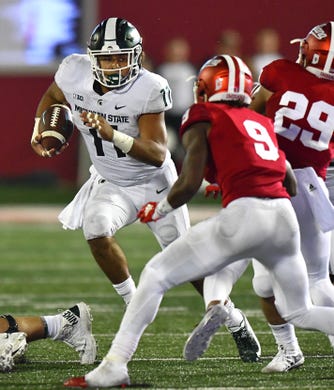 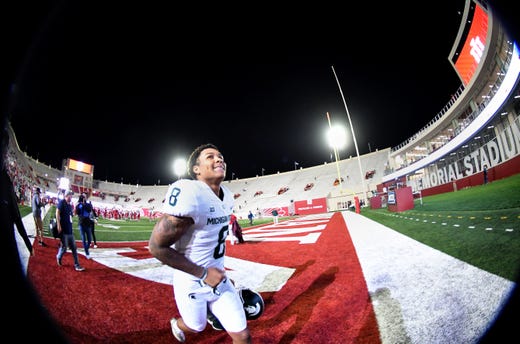 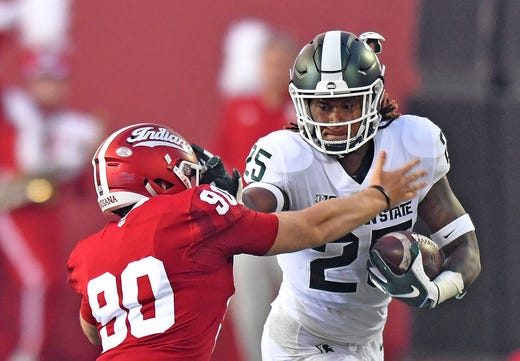 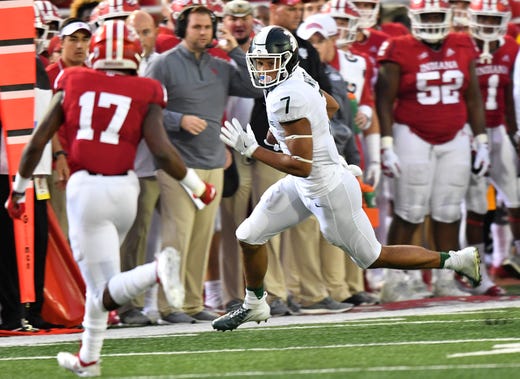 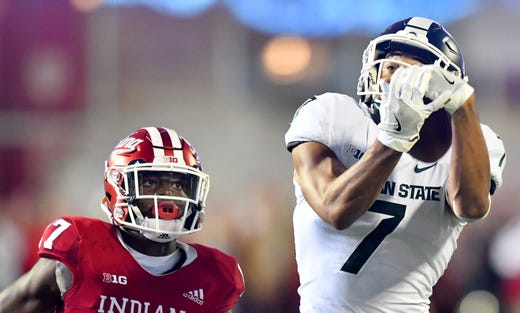 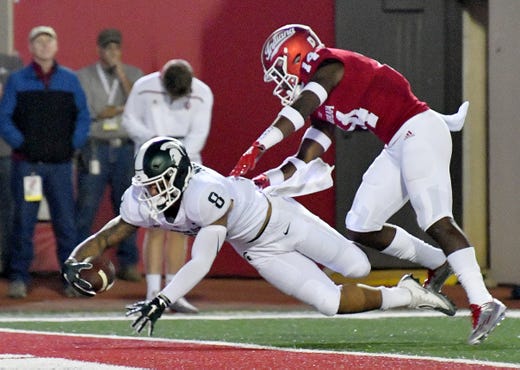 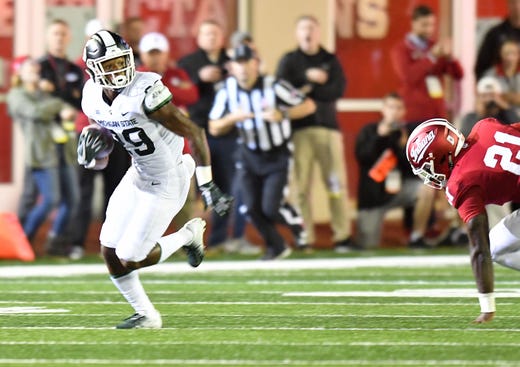 MSU cornerback Shakur Brown (29) grabs the ball out of the air for a pick-six in the first quarter. Dale G. Young, Detroit News
Fullscreen 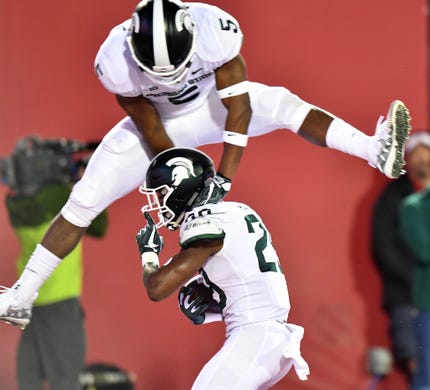 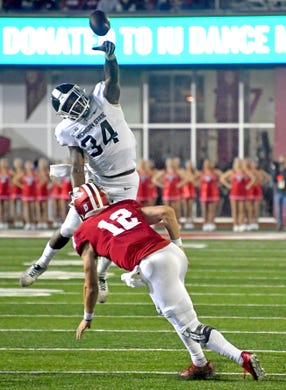 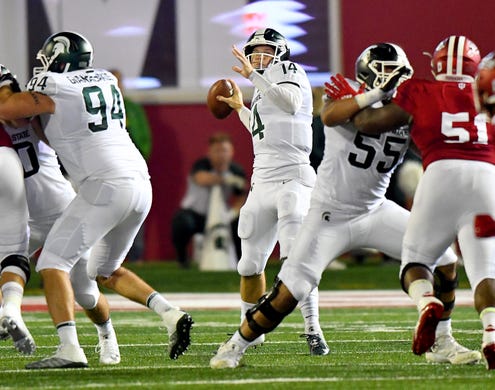 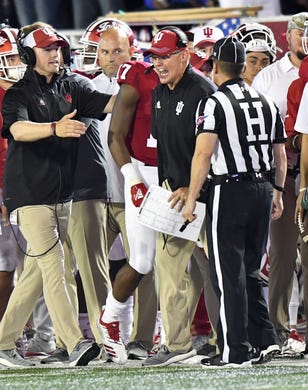 MSU's Felton Davis takes a Brian Lewerke pass and dances down the sideline for a first down Dale G. Young, Detroit News
Fullscreen 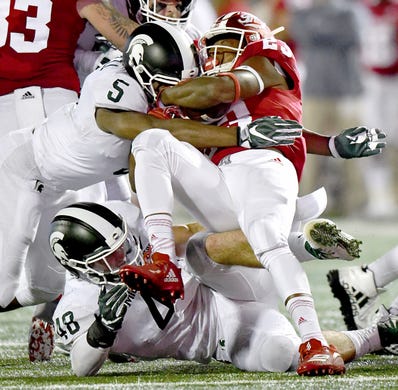 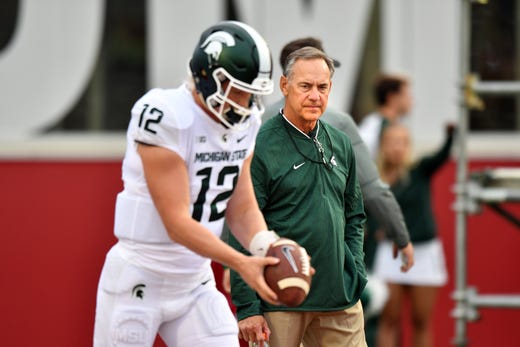 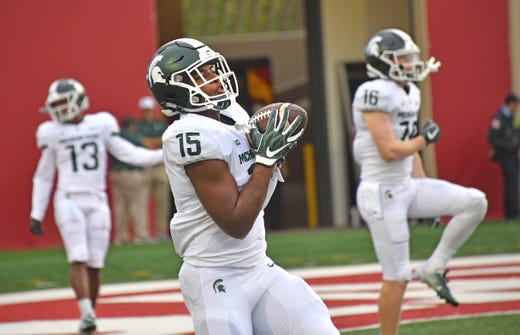 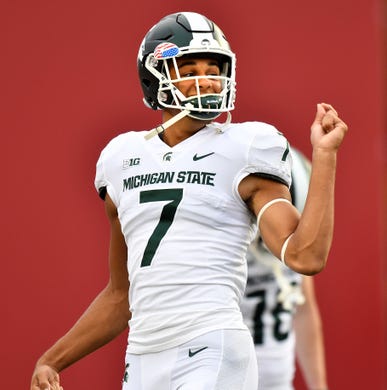 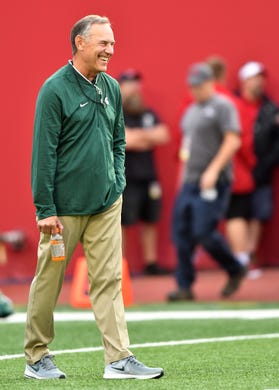 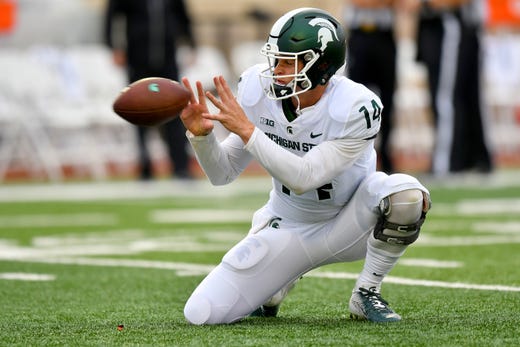 Williams, defensive end Kenny Willekes, linebacker Andrew Dowell and linebacker Brandon Bouyer-Randle were each credited with a sack though that number should have been higher as a strip-sack from Randle was credited simply as a forced fumble.

It’s the aspect of the defense that has been slow to come around the past two seasons.

“I thought the scheme was good and we brought people to the point of attack,” Dantonio said. “As I said last night, we’ve got good players up front and they not only hold their own but they can make big plays. Basically, all four defensive tackles have played well and been consistent … and Willekes played outstanding and was all over the place again.

“Brandon Bouyer-Randle had a positive game in the Delta front and provided pressure as well and I thought we got great pressure up front from Andrew Dowell.”

While the defense is playing with confidence heading into Saturday’s home game with Central Michigan, there are still concerns on the offensive side of the ball for No. 21 Michigan State.

Once again, the running game wasn’t consistent and the injuries are piling up along the offensive line as guard Kevin Jarvis and guard/tackle Luke Campbell were injured at Indiana.

“We’ve got to play better up front on offense,” Dantonio said. “So much is involved in running the football. Scheme, play selection and those kinds of things. Also, the defense and what they are playing. There are a lot of different variations. Then you get to technique and quite frankly if technique on one guy falls apart the whole thing falls apart. Maybe it’s a fullback or it may be a tight end if they’re in there. It’s not always the offensive line.

“But we’re nicked up in there a little bit too, so we’re dealing with that, as well.”