Matt Charboneau answered readers' questions about the Michigan State offense's struggles and how the freshmen might fit in on the basketball team.

MSU defensive ends coach Chuck Bullough on how the defense has played through three games. The Detroit News 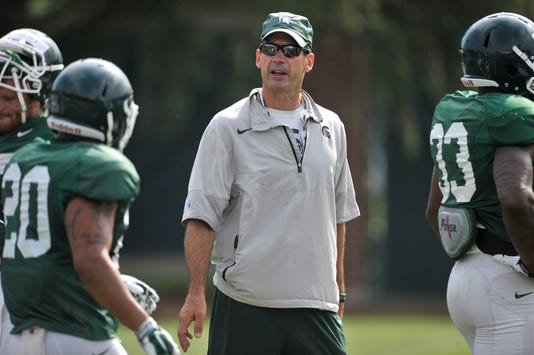 East Lansing — There’s still plenty of frustration surrounding Michigan State’s offense, and you know who draws most of the ire when that’s the case.

Of course, co-offensive coordinator Dave Warner gets more heat this week in the mailbag as the Spartans get set to host Central Michigan on Saturday. There’s also some concern over the growing injury situation with the Spartans, while we tackle defensive end Kenny Willekes’ start to the season.

With basketball practice opening this week, we also start to take a look at how some of the freshmen might fit into the rotation.

►Question. Why is Dave Warner still the offensive coordinator? — @IzzoneGreen

►Answer. Looks like we’re gonna ride this one all season. I feel like it’s 2013 when the team was doomed, the offense was awful and there was no quarterback. Of course, that wasn’t the case, at all, but the general panic was almost exactly that. Now, I’m not saying this team runs the table and is in the Rose Bowl but, again, I think it’s short-sighted to put this all on play-calling. The jet sweep with Brandon Sowards inside the 10 last week was a bad call. Mark Dantonio even said so at his press conference this week. But the issues with this offense go farther than Warner’s play-calling. We’ve talked about the offensive line constantly, and that unit continues to battle injuries while the leading rusher has missed a game and a half. And, Brian Lewerke already has four interceptions after throwing seven all of last season.

So, this isn’t all on Dave Warner. Simple as that. I know some want this team to throw every play, and in a game like Indiana last week, it seemed like a decent option. But what do defenses try to do? Make an offense one-dimensional. Start throwing every down and when that goes bad, will we still be blaming Warner?

►Q. Odds of MSU making a switch from Dave Warner next year? — @Ryan_giancotti

►A. No chance. Some questions I get for this wonder if it’s because he’s buddies with Dantonio. That one, to me, is hilarious. Dantonio is going to risk his job security because he doesn’t want to hurt his friend’s feelings? Sorry, that’s nuts.

This offense would have to have a couple of years of consistently not being able to move the ball for a switch to be considered.

►Q. How are we with injuries? How concerned should we be about these preventable turnovers and penalties? — @JusticeA4

►A. That’s two questions. But OK, here we go. The injury situation is not great but not awful, if that makes any sense. Mostly because there don’t seem to be any season-enders. However, some key guys are up in the air including running back LJ Scott, wide receiver Darrell Stewart, cornerback Josh Butler and offensive linemen Kevin Jarvis and Luke Campbell. Some of those guys could be back, including tackle Cole Chewins. But I’d expect with Central Michigan up next, the Spartans will be conservative with most of these guys.

As for the turnovers and penalties, that’s always a good question. That might be the hardest thing for coaches because, really, it comes down to focus on the players’ part. Some have been poor decisions, especially from Lewerke, but most of the penalty issues can easily be cleaned up with a little discipline.

►Q. Does Kenny Willekes get All Big Ten this year? — @TheRealUDJG 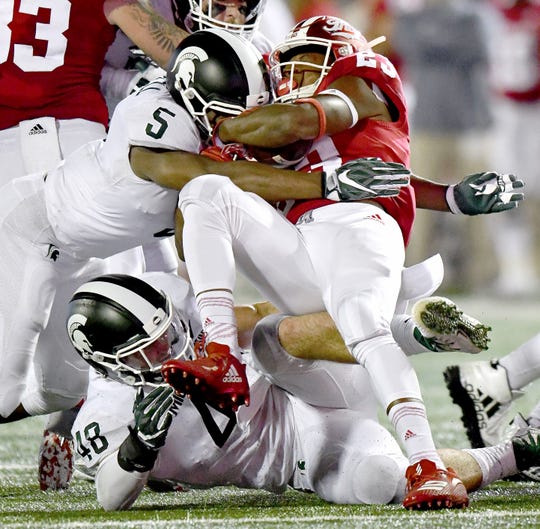 ►A. If he keeps playing like this, I can’t imagine he wouldn’t. With five tackles for loss, including three sacks, he’s on pace to have some impressive numbers. How he stacks up with the rest of the conference remains to be seen, but he’s got to be a solid bet for first- or second-team at this point. He won’t be limited either. Michigan State does a good job of rotating its defensive lineman, but Willekes will absolutely play more snaps than any other end … by a lot.

MSU DE Kenny Willekes talks about the way the Spartans' defense has been dominant at times this season. The Detroit News

►Q. Still on the Eli wagon as I am an old Cub. We gonna see him this year or will he be a redshirt? Ps. How’s Foster fitting in?  Cassius looked strong this summer expecting big things from my UD Cubs!!! — @redwingandy1

►A. Another one mixing in multiple questions, but we’ll do our best. Eli, of course, is Elijah Collins. He’s traveled to both road games, but if LJ Scott is back soon, I’d have to guess Collins is headed for a redshirt at this point. Nothing for sure because you never know with injuries. I wouldn’t count him out of playing some, considering he can see action in four games and still redshirt, but at this point, the plan seems clear.

As for hoops, we’ll get our first look Wednesday. The Spartans opened practice Wednesday, but it’s not like it’s the first time they’ve all played together. They’ve been around each other all summer. I think the Winston-Loyer combo could be a good one by allowing Winston to play off the ball some. First game is a little more than a month away.

►Q. Is Aaron Henry the freshman with the clearest path to playing time? Also, what is the big man situation? Obviously Ward and Tillman will play the most but will Tillman edge out Ward in minutes or will Bingham get any minutes? — @TheRealTHort

►A. Good to see all the basketball questions. The first question is a tough one. I know they love Henry, but I’m not sure I’m counting out any of those guys. Maybe Thomas Kithier if we’re talking about redshirts, but I could see Henry, Loyer, Gabe Brown and Marcus Bingham being in the rotation. Some of it depends on where Kyle Ahrens is, but I’d expect Henry and Brown will get plenty of looks.

As for the big men, that will be another interesting one to watch. Bingham’s development will be the key there, otherwise you could see even minutes for Ward and Tillman. Also, keep an eye on maybe Tillman at the four some to play with Ward or Bingham.