Michigan State coach Tom Izzo says he was impressed by the focus his players maintained last season. The Detroit News 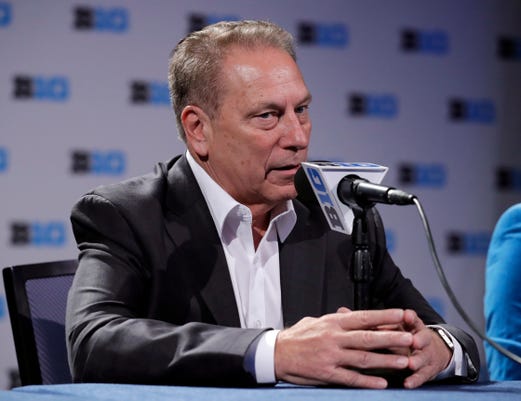 At least, the Michigan State coach isn’t doing it when it comes to recent statements in federal court that pointed out his program was one that was not willing to pay a recruit who is at the center of a case surrounding corruption in college basketball.

“I don't feel vindicated because you shouldn't be commended for doing what you're supposed to do,” Izzo said Thursday at Big Ten media day. “We didn't do anything any different than just about every program that I know here does it the same way. I take my hat off to all the Big Ten coaches.”

Izzo was responding to statements made last week by the attorney for Christian Dawkins, a former middle man for agents who is being charged — along with former Adidas executive Jim Gatto and former Adidas employee Merl Code — with wire fraud and conspiracy to commit wire fraud.

While discussing the recruitment of Saginaw's Brian Bowen Jr., who it has been alleged that multiple schools worked to put together cash payments for his family in order to secure his commitment, Dawkins’ attorney pointed out Michigan State was not one of those schools.

“Michigan State was one of the only schools that was not going to pay Brian Bowen to go there,” said Steve Haney, Dawkins’ attorney.

More: Beilein: You don't have to worry about Michigan, NCAA violations

In 2017, Bowen had a list of finalists that included Michigan State, Oregon, Arizona, Texas and Creighton. However, months after it appeared Michigan State had backed away from its recruitment, Bowen surprised many by committing to Louisville in June of 2017. The FBI investigation alleged Gatto agreed to send $100,000 to Bowen's family to secure the commitment to Louisville.

Bowen ended up signing with Louisville, but never played as the FBI investigation began and the university fired coach Rick Pitino. Bowen eventually transferred to South Carolina but did not play. He entered last June’s NBA Draft, but withdrew after participating in the NBA Combine.

After the NCAA ruled Bowen would be ineligible if he returned to South Carolina, the former McDonald's All-American signed a professional contract with the Sydney Kings in Australia.

Last season was a lost one for Kyle Ahrens. The 6-foot-6 guard/forward was forced to miss the entire season because of a foot injury, causing some to wonder what his future might be with the Spartans.

Fast forward a year and Izzo believes the redshirt junior could be an X factor for Michigan State.

“The kid that I think is gonna help us a lot is Kyle Ahrens, but he hasn’t played in two years,” Izzo said. “And he’s a tough kid who has got the highest vertical (jump) on the team and is one of the best shooters. That is not a combination that you see much.

Ahrens is versatile and has played both on the wing and in the post during his career. He’s clearly more suited to be a wing, but if he remains healthy and looks as good as he has in early practices, he could prove valuable.

“We’ll see what he does when the games start,” Izzo said. “Being off as long as he has, I’ve learned over the years that guys who miss a lot of time, that’s the way it is. But I do like what he’s brought to the table and how hard he’s worked.”

Izzo took plenty of heat after Michigan State lost to Syracuse in the second round of the NCAA Tournament. Much of it was because of his decision to give senior Ben Carter significant minutes at the expense of Jaren Jackson.

It didn't help that the Spartans shot just 8-for-37 from 3-point range, but Izzo at least acknowledged some of the criticisms on Thursday.

“We all struggled. The coach did a bad job against Syracuse,” Izzo said. “And Syracuse did a great job. So, the combination of the two, and we had the third best 3-point shooting team that shot 8-for-36, or something.”