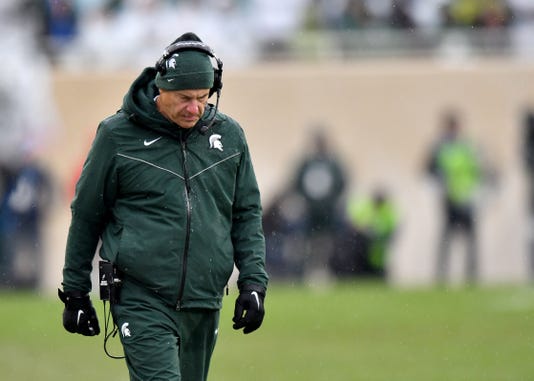 The result almost became secondary as Michigan controlled the game for the most part, beating Michigan State, 21-7, for the second straight time at Spartan Stadium and finishing the day alone in first place in the Big Ten East.

It was what happened before the game and the war of words after that became center stage as Michigan coach Jim Harbaugh called Michigan State’s actions “bush league” and called out Dantonio in the process. Dantonio quickly responded, calling Harbaugh’s comments “B.S.”

During his weekly teleconference Sunday night, Dantonio was ready to move on.

“As far as everything prior to the game, I’m really not gonna bother commenting on it,” Dantonio said. “I’ve never commented on a coach in the past. I’m not gonna comment on one now and the whole thing to me was sort of juvenile and things are gonna happen in rivalry games. I stand by what I said yesterday.”

It all began well before the game when Michigan State (4-3, 2-2 Big Ten) took its regular walk down the length of the field at Spartan Stadium, something it has done at all home games under Dantonio and something that never has created problems. While doing so, several Michigan players were at midfield and an altercation followed.

Michigan players said Michigan State was late to arrive and no one asked them to move while those on the Michigan State side say they were asked to move. It resulted in Michigan’s Devin Bush tearing up the Spartan logo at midfield.

Dantonio was just behind the players walking when the incident happened and didn’t appear to react to the players yelling at each other. After the game, Harbaugh said Dantonio was walking behind, “smiling the whole time,” to which Dantonio responded with the “B.S.” comment.

Tape speaks for itself (see right side of screen). pic.twitter.com/WXLVhEL15m

Deciding not to address it any further on Sunday, Dantonio turned his attention to his team, which will get set to host Purdue at noon on Saturday as the Boilermakers are coming off an upset win over Ohio State.

There was plenty of focus on quarterback Brian Lewerke, who was just 5-for-25 passing against Michigan and was playing with a bad right shoulder. It was bad enough that it kept him from throwing during the week, but it had improved enough that the decision was made he could play on Saturday.

“This is a situation that gets better over the course of time,” Dantonio said. “Even now, as the week progressed he felt better. That’s why we made the decision — he made the decision that he would play. I think it’s better today than it was yesterday, but we’ll make the decision (to play or not) as we go.”

Redshirt freshman Rocky Lombardi took over for Lewerke on the final series of the game and completed on pass as Michigan penalties allowed the Spartans to move into Wolverines territory. Dantonio said Lombardi got plenty of reps during the week and there was discussion about putting him in the game against Michigan earlier. 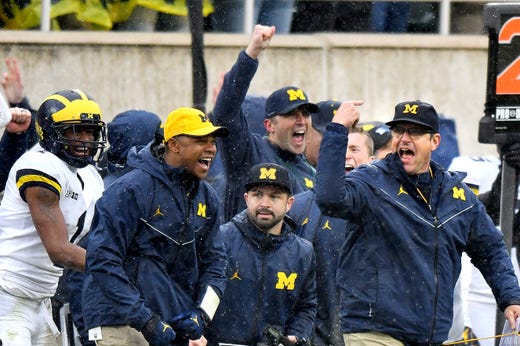 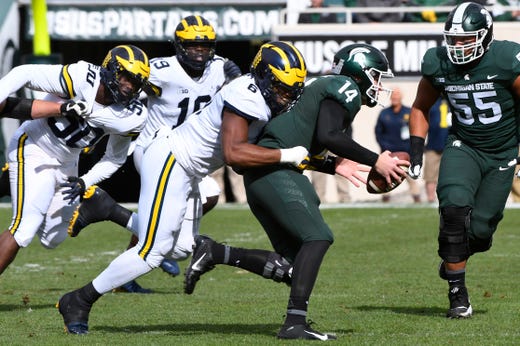 1. Michigan (7-1, 5-0) – The Wolverines are in a position they haven’t been in quite some time, sitting atop the division more than halfway through the season. Back-to-back wins over Wisconsin and Michigan State have them in place to reach the Big Ten title game if they can win out. They’ll get the upcoming week off before hosting Penn State. The Ohio State game looms at the end of the season. Last week: 2. Rod Sanford, Detroit News
Fullscreen 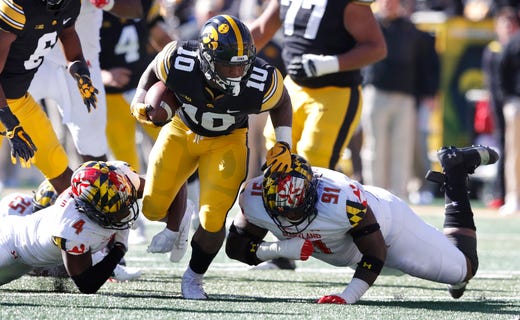 2. Iowa (6-1, 3-1) – Not many people have been noticing since the Hawkeyes lost to Wisconsin early in the season, but Kirk Ferentz’s team is quietly putting together a solid campaign. They handled Maryland easily and kept pace in the West. Next week presents a significant challenge as they head to Penn State, a game that could make or break the regular season. Last week: 3. Charlie Neibergall, AP
Fullscreen 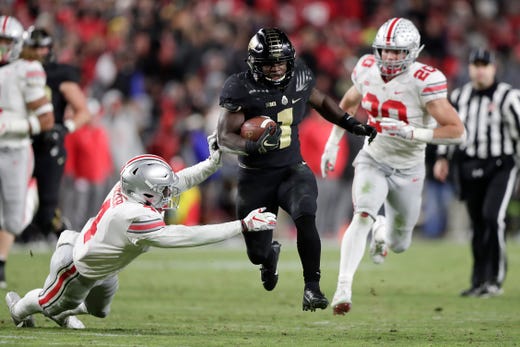 3. Ohio State (7-1, 4-1) – The Buckeyes did it again – went on the road and lost in spectacular fashion to throw a massive kink in their playoff plans. They were thoroughly dominated by Purdue and now must regroup over the final four weeks. They still travel to Michigan State and host Michigan, meaning a trip to the conference title game is beginning to look precarious. Last week: 1. Michael Conroy, AP
Fullscreen

4. Northwestern (4-3, 4-1) – The Wildcats haven’t made things look pretty the last couple weeks, but the bottom line is they’ve won three straight and control their destiny in the Big Ten West. They host Wisconsin next week in what could essentially amount to a West Division championship game as the winner will be in prime position to head to Indy. Last week: 4. Julio Cortez, AP
Fullscreen 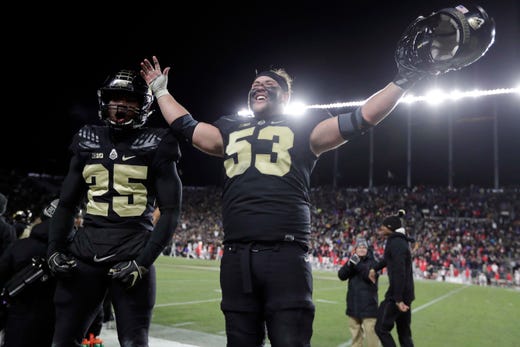 5. Purdue (4-3, 3-1) – Not many people were giving the Boilermakers a chance against Ohio State but they responded by winning in dominating fashion in the biggest game in West Lafayette in years. After four straight wins, Purdue finds itself tied atop the Big Ten West but needing some help to reach the conference title game. Tough games await, including next week at Michigan State. Last week: 8. Michael Conroy, AP
Fullscreen 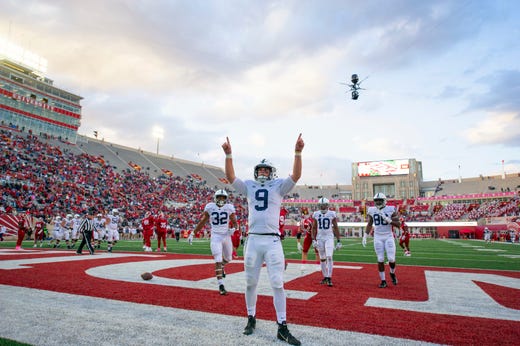 6. Penn State (5-2, 2-2) – Forgive the Nittany Lions if they were a bit sluggish this week after dropping two straight to Ohio State and Michigan State for the second consecutive year. They kept it together enough to get a win at Indiana but face a tough road over the next three weeks with Iowa and Wisconsin at home sandwiching a trip to Michigan. Last week: 6. Doug McSchooler, AP
Fullscreen 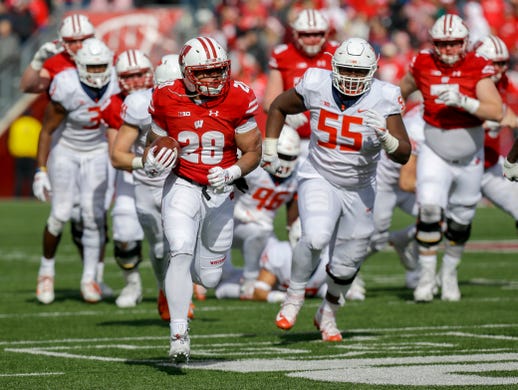 7. Wisconsin (5-2, 3-1) – The Badgers rebounded from last week’s loss to Michigan by getting well against Illinois. It will get tougher next week with a trip to Northwestern, a must-win if the Badgers hope to get a return trip to the conference championship game. Games at Penn State and Purdue still loom, however, even if they can get past the Wildcats. Last week: 7. Andy Manis, AP
Fullscreen 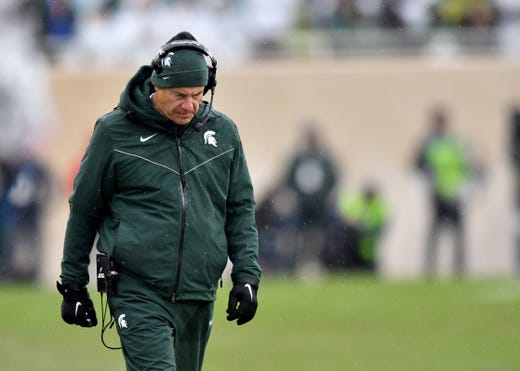 8. Michigan State (4-3, 2-2) – The Spartans lost to their rival at home and continued to lose even more as wide receiver Felton Davis ruptured his Achilles. The injury simply adds to a growing list as the Spartans are playing severely short-handed on offense. Bowl position is about all the Spartans have to play for as surging Purdue comes to town next week. Last week: 5. Dale G. Young, Detroit News
Fullscreen 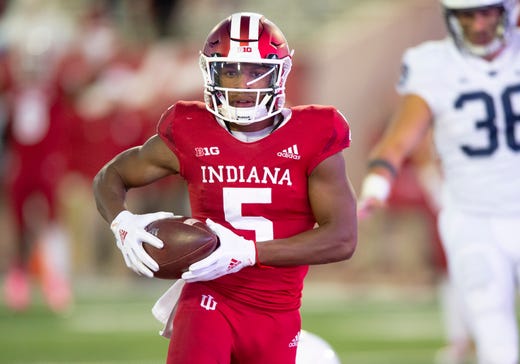 9. Indiana (4-4, 1-4) – Life in one of the toughest conferences in college football continues to take its toll on the Hoosiers, who once again played tough only to fall short against Penn State for a third straight defeat. The Hoosiers are better than their record shows, but the road is tough. They get a shot next week at Minnesota to end the skid and get closer to six wins. Last week: 11. Doug McSchooler, AP
Fullscreen 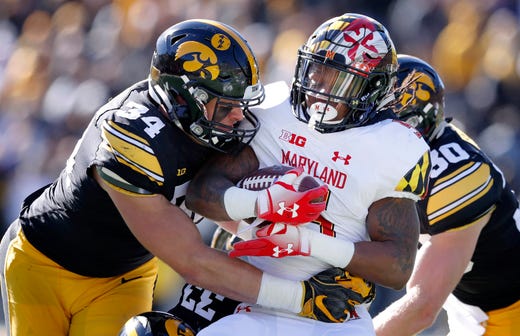 10. Maryland (4-3, 2-2) – The up-and-down play continued for the Terrapins as they got shut out at Iowa. The Terps haven’t won two straight since the first two games of the season and their running attack was stuffed by the Hawkeyes. Hosting Illinois next week provides an opportunity to continue their back-and-forth season as they need two more wins to become bowl-eligible. Last week: 9. Charlie Neibergall, AP
Fullscreen 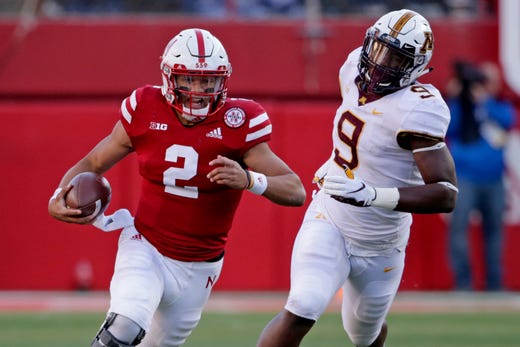 11. Nebraska (1-6, 1-4) – Well, the Cornhuskers didn’t have to wait for Bethune-Cookman. It turns out Minnesota, winless in the Big Ten, did the trick as coach Scott Frost got his first win with his alma mater. Odds are the Huskers make it two in a row next week, but the finish will be tough as Ohio State, Michigan State and Iowa are all still on the schedule. Last week: 13. Nati Harnik, AP
Fullscreen 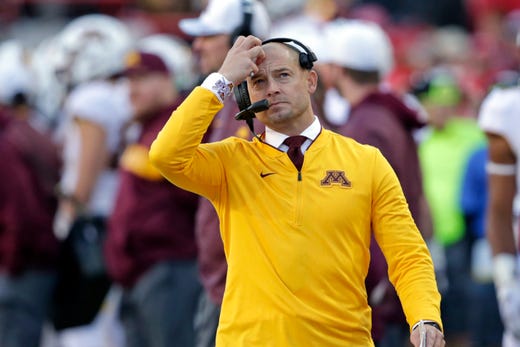 12. Minnesota (3-4, 0-4) – The Golden Gophers lost their fourth straight as they were the victims in Nebraska’s first victory of the season. The Gophers are reeling in P.J. Fleck’s second season, not the position many hoped they’d been in when they hired the former Western Michigan coach. A trip to Illinois in two weeks might be the only winnable game left on the schedule. Last week: 10. Nati Harnik, AP
Fullscreen 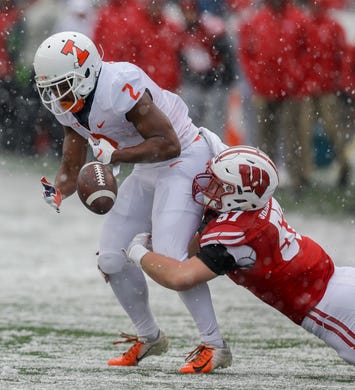 13. Illinois (3-4, 1-3) – The Fighting Illini have now lost four of five and the good feelings that were around after the win over Rutgers a couple of weeks ago have faded. They’ll need to win three of the final four games to be bowl-eligible, not exactly a likely scenario for a team that hasn’t won more than three games in a season under Lovie Smith. Last week: 12. Andy Manis, AP
Fullscreen 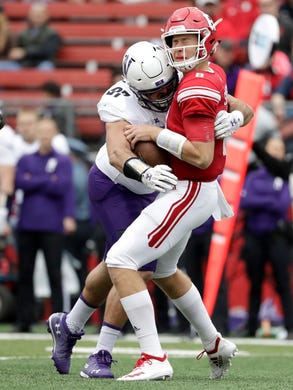 14. Rutgers (1-7, 0-5) – There was something positive this week for the Scarlet Knights, but in the end they lost their seventh straight. Northwestern needed another rally to overcome the home team that was desperate for its first conference win. That might not come as the Scarlet Knights close the season with Wisconsin, Michigan, Penn State and Michigan State. Last week: 14. Julio Cortez, AP
Fullscreen

But Dantonio made the choice to stick with the junior who has been the starter since last season.

“I wanted to stay with Lewerke for one more series,” Dantonio said. “There’s a lot of things (that go into it). Production, down and distance, separation of wide receivers on the defensive backs. Then, certainly, concepts. You have to look at that as well.

“I’ve always believed in him,” Dantonio said. “I’ve always felt he has a great demeanor. He’s a confident guy on the field and off the field and he can roll with things. … I have faith in our other quarterbacks, too, but I’ll always give a guy a chance that’s put himself in a situation where he’s proven himself and he’s done that for us, so that’s the reason we stayed with him.”

The depleted Spartans offense took more hits on Saturday as wide receiver Felton Davis III was lost for the season to a ruptured Achilles and center Matt Allen was also hurt. Dantonio said Davis would likely have surgery this week and then begin rehab as he preps for next spring’s NFL Draft.

As for Allen, Dantonio said his status was “sort of an unknown” and wouldn’t speculate on his status. He did say wide receiver Cody White would be back “sooner than later” but didn’t offer specifics. White hasn’t played since breaking his hand against Central Michigan.

With Laress Nelson and C.J. Hayes also hurt, cornerback Justin Layne played some at receiver, something Dantonio said would continue.

“We’ve got to be able to play through the pain, I guess,” Dantonio said.