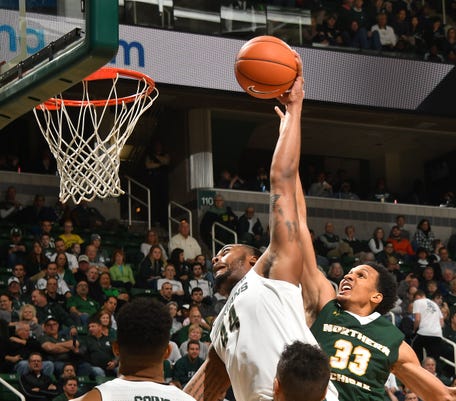 Nick Ward contemplated a move to the NBA, but instead chose to stick around for his junior season at Michigan State.(Photo: Dale G. Young, Detroit News)

Like most college basketball players, Nick Ward has his sights set on the NBA. The 6-foot-8 junior entered the draft last spring and spent the early part of the summer going through his share of workouts with various NBA teams before deciding to return to Michigan State. According to both Ward and coach Tom Izzo, the feedback from those at the next level was invaluable, and has led to a revival of sorts for the efficient low-post scorer. Ward spent the rest of the summer getting up early and working out daily, sometimes twice a day, as he became dedicated to improving his game and his conditioning.

Now at around 240 pounds, Ward believes he can go longer stretches and increase his playing time, which was 18.9 minutes a game last season. He also has worked on his mid-range jump shot and has doubled his efforts on becoming a better ball-screen defender. Always a beast in the low post, Ward now has the chance to become a more complete player. “I’m excited about the new version of Nick Ward,” Izzo said.

More: Michigan State out to prove it's one of nation's top teams

Most teams that excel at the college level have the same trait — they get good guard play. As Michigan State looks to end its NCAA Tournament frustration — it hasn’t gotten out of the first weekend the past three seasons — it might just have the backcourt to get the job done. The group is led by junior Cassius Winston, who took his game to new levels as a sophomore. Winston was the top 3-point shooter in the Big Ten, and was second in the conference in assist-to-turnover ratio. With Miles Bridges and Jaren Jackson Jr. in the NBA, Winston becomes the catalyst of the offense with the ability to become a star.

Winston will be joined by senior Matt McQuaid and junior Joshua Langford. Both have flashed at times in their career, and if the Spartans are truly going to be among the best teams in the country they’ll need both to find the consistency this season. McQuaid is a shooter who defends well and can back up Winston in a pinch, while Langford is another two-way standout with the ability to create his own shot. Consistency has been his biggest problem over the past two seasons, but both he and McQuaid have shown they have the game to make the backcourt great.

As Izzo has said, sometimes experience outweighs talent and Michigan State is hoping that rings true this season. That’s not to say the Spartans are lacking in talent, but when you lose a pair of NBA lottery picks, there’s no doubt there will be a drop in that category. The freshman class offsets that somewhat, but it can be a wild card considering it’s hard to gauge how quickly a first-year player is up to speed. That leaves the experience factor for the Spartans, who return seven rotation players who have played for a combined 188 starts. They also bring back three of their top five scorers.

The core of the experience lies in the junior class as Winston, Ward and Langford were part of Izzo’s highest-rated recruiting class two seasons ago when they were joined by Bridges. McQuaid also has seen his share of action over the years, as has senior forward Kenny Goins. Junior wing Kyle Ahrens is back after missing all of last season with a foot injury, and sophomore forward Xavier Tillman became a rotation regular late last season. Does all that experience translate into wins? Hard to say, but it never hurts in a game dominated by youth. 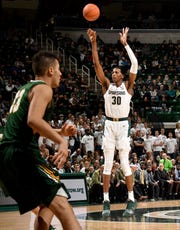 As important as experience is to the Spartans this season, there’s no doubt the freshmen will be counted on to some extent. Aaron Henry, an athletic 6-6 wing from Indianapolis, almost certainly will  be part of the rotation from the beginning, as he is physically ready to play at this level, while guard Foster Loyer will need to play at least some to keep Winston from getting worn down. However, at just 6 feet and 170 pounds, Loyer has a long way to go to match up physically with some of the bigger guards he’ll see.

The same issue exists for 6-11 Marcus Bingham Jr. and 6-7 Gabe Brown. Brown can shoot and will see at least some action early, but the biggest question mark is Bingham. At just 215 pounds he can easily be pushed around. It has the Spartans contemplating a redshirt, but because of his skill and upside, they might choose to simply work him in when they can this season and see how quickly he adapts to this level. That leaves 6-8 Thomas Kithier, who missed all of last season at Clarkston because of eligibility issues. His best chance for playing time this season will be if the bigs get in foul trouble early.

Michigan State playing a tough schedule is a given, and so is Izzo finding fault in it. Of course, that doesn’t mean he’s changing his approach anytime soon considering he believes the benefit for his team outweighs any negatives. There’s no doubt that playing the best of the best lets a team know exactly where it stands, and the Spartans’ veterans aren’t shying away. Where it hurts MSU this year is that it doesn’t offer much of a chance to work in the freshmen as easily as a lighter schedule might.

The highlights this season include a matchup with No. 1 Kansas in the Champions Classic — the third time in the last five years MSU has played the top-ranked team in that event — and includes a game against No. 21 UCLA in the Las Vegas Invitational, which could lead to a game against No. 8 North Carolina. There are also road games against Louisville and Florida mixed in all before the end of the year as the Big Ten shifts to 20 conference games.