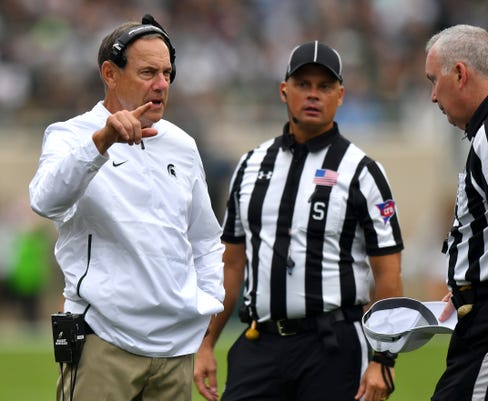 Michigan State head coach Mark Dantonio has not seen a lot of turnover on his staff over the years.(Photo: Dale G. Young, Detroit News)

Nothing like a loss that produces no offense to get the temperature rising among the fanbase.

That was certainly the case this week with the Michigan State mailbag. After a couple of victories, the ire toward the coaching staff had cooled, but it was back with a force this week.

All football this time as we dive into your questions.

►Question. What would you classify as a surprise from MSU with regards to offseason changes?  Have this season's struggles been enough of an indicator that there are significant issues or is the program perception that uncontrollable like injury have been the driving factor? — @Mike_Bedard

►Answer. A surprise to me would be any significant staff changes, outside someone leaving for a promotion, whether that is for a head-coaching job or, for example, a position coach taking coordinator job somewhere. Now, I understand many folks would wonder who on the staff would be in that position, and that would be fair on the offensive side of the ball. Though I’ll say that, despite the struggles on the offensive line, Mark Staten is highly thought of and has interviewed for other jobs in the past. The more likely possibility would be someone from the defensive staff leaving. We’ll get into some of that in a minute, but with the way that unit has played this season — and most seasons, for that matter — it wouldn’t be a surprise if some of those coaches were on the radar of other programs.

►Q. Are the Spartans at risk of losing Tressel to a head coaching job? — @Timo_Slice

►A. And just like that, we get to the prospect of defensive coaches leaving. Obviously, Mike Tressel has continued the seamless transition from Pat Narduzzi to Harlon Barnett/Tressel to running things on his own. (Real quickly, someone in this mailbag early in the season suggested the defense was a mess and it was clear Barnett leaving would be the end of any success. Hmmm. Guess not.) For Tressel, a lot of it would be about what is out there. I’m not sure he’d want to just jump at whatever comes his way, and considering he’s in his first season as the sole coordinator, it might take time for bigger jobs to be on his radar. Aside from that, you’ll always be keeping an eye on guys like Paul Haynes and Chuck Bullough. Haynes has been a head coach and Bullough has extensive time as a coordinator. Nothing rumbling now, but we’ll see when jobs start opening after the season ends.

►Q. With the ineffective play of the offensive line, is Mark Staten on the hot seat? — @RandyCheadle

►A. The simple answer is no. I know Staten wouldn’t use it as an excuse, but Tyler Higby is the only opening-game starter who hasn’t dealt with some sort of injury. Yeah, you need to adjust, and depth is important, but Staten has been scrambling almost as much as wide receivers coach Terrence Samuel. It’s a long way of saying one truly poor season up front isn’t going to see Staten packing his bags. 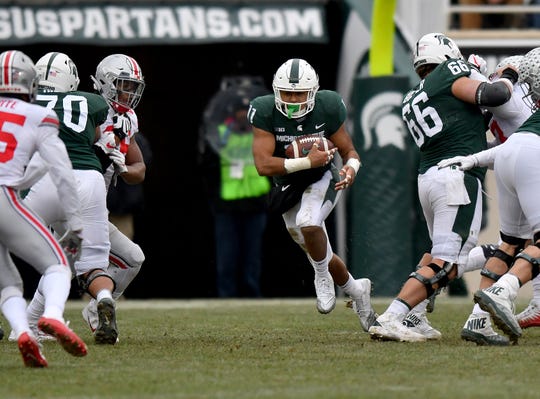 ►Q. Didn’t challenge OSU with the run at all, let them off the hook with only 6 rushes by our tailback. To say we couldn’t run the ball isn’t correct when you have so few attempts. This coming off our best day running the ball against MD. Pound Green Pound! — @Rob02665515

►A. I remember the good ole days when we would fill the mailbag with gripes about running the ball too much. Look, I get your point and I tend to agree with you when it comes to the overall numbers from last week. But considering there wasn’t much push up front in the first half, I understand the decision to throw with five straight possessions in the third quarter that began inside the 6. Sometimes game situations dictate what you do, and in that game, it didn’t seem like more carries to the backs would have been the wise move, considering the field position.

►Q. How can Dantonio justify keeping Warner and Staten after 4 years of being at best mediocre, and trending toward one of the absolute worst offenses in all of D1. It’s not fair to his superb defense, or the entire team. Are the O players skeptical of the scheme too? — @tywebbmsu

►A. Understand, I’m not here trying to defend how Dantonio handles his staff. All I’m saying is he believes in his philosophy, and he does not believe that brooming Dave Warner or Mark Staten magically wipes away all of this season’s frustrations. So how does he justify it? He’ll tell us that it’s the same staff that set records in 2014 and has helped win three Big Ten championships. What does that guarantee? Nothing. I’m just saying, I’d be surprised to see significant changes. As for the players being skeptical? I haven’t sensed that or been told that.

►Q. It’s funny because this injury hasn’t been Lewerke’s downfall. He’s been terrible all year from week 1 until now. This is why MSU will never be elite. We let a 4-star QB walk. MD is a funny dude. I’m starting to get sick of wining just 10 games with a top 5 defense. — @JordanManigoe

►A. You remember what it was like before Dantonio, right? A 10-win season was special. But let me get this straight: Brian Lewerke is why MSU will never be elite? I don’t get it. Connor Cook, Kirk Cousins, Brian Hoyer? All pretty good quarterbacks. Oh, and Lewerke had the second-most total yards in program history last year. Sure, there have been tough years like 2012 and 2016, but it’s not like poor QB play is some sort of theme under Dantonio. And by the way, Lewerke was a four-star quarterback. And that leads us to the next question …

►Q. Any chance that the staff would offer Messiah deWeaver? Is that even possible? Would he look at us again? He dominated JUCO and I’m sure would have a shot at QB. Otherwise any guess on where he lands? See a lot of MAC. — @RealKyleHoward

►A. Is it possible? Sure. Is it gonna happen? No. Michigan State didn’t stop recruiting quarterbacks, so it’s not like it needs him to come back. And when he was here he couldn’t beat out Lewerke, and some believed by late last year that Lombardi was playing well enough to be the No. 2. So, it’s good that deWeaver has made the most of his move and I’m sure he’ll get a shot somewhere. I tend to think the MAC is a starting point. He could end up with a Power Five team depending on who needs a quarterback. 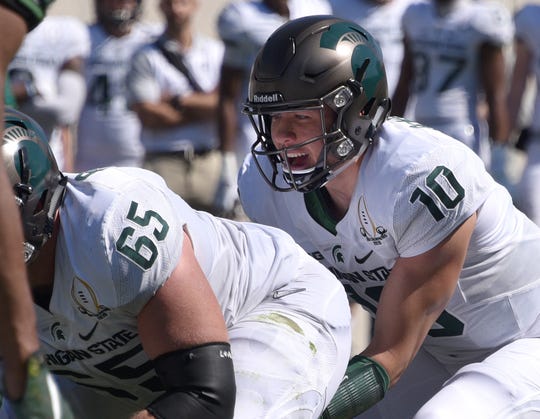 ►Q. Is Dantonio simply trying to keep both Brian Lewerke and Rocky Lombardi engaged so neither of them transfer? There has been some notable attrition at the position (Messiah deWeaver, Dwan Mathis flipping to OSU). I just wonder how much that might factor into the decision. — @AgentSleek

►A. I don’t doubt there is some thought about that, but at some point you have to go with whoever you think is best and let the chips fall where they may. It was the same with deWeaver. You’d love to have all those guys at the ready, but the reality is they want to play. That means transferring is always a possibility. But you can’t determine a starter based on what might happen the next season.

►Q. Will we see the light of Theo Day when the Rutgers Rugrats come to EL? — @spartanswill86

►A. Maybe. If the game is a blowout, as I suspect it will be, there is a decent chance Day could get a few snaps. With the new redshirt rules, it would seem like a great time to do so.

►Q. What are your thoughts on LJ Scott coming back? Does this say to you he doesn’t see himself playing on Sundays? A fifth year RB isn’t what most teams are looking for since they think 28 is old. — @RealKyleHoward

►A. I have to admit I was surprised he made that decision. And let’s be clear, at this point it’s hardly binding. He could always decide to enter the draft. Even if he goes late in the draft, I believe Scott would have a shot to make a roster. The question is, does his status improve with another season? Maybe, but that’s another whole season of tread on the tires.

►Q. Will some RBs now transfer (much like Madre London) now that LJ Scott has announced he is seeking a medical redshirt and intends to return next season?  Is that a good thing ultimately in your opinion for the MSU program? — SpartyH

►A. To be clear, it’s not a medical redshirt. It would just be a regular old redshirt. But could it lead to transfers? Sure. It’s already a crowded room, and I can imagine some might not want to sit and wait another season. Hard to say, but it might be the position group to watch the most when the season ends and spring practice approaches.