'A win is a win': Michigan State does enough to escape Rutgers

Michigan State has struggled offensively all season, and on Saturday against Rutgers, that struggle nearly led to a huge upset.

'A win is a win': Michigan State does enough to escape Rutgers 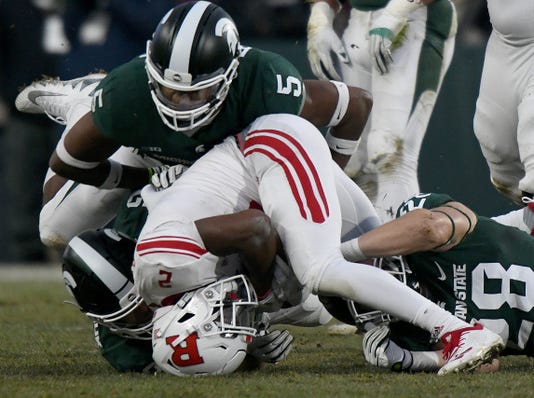 East Lansing — Considering Michigan State has spent the bulk of the season trying to find any offensive momentum, it’s no surprise the Spartans closed the regular season the way they did on Saturday.

Taking on a one-win Rutgers team on Senior Day at Spartan Stadium, an ineffective offense nearly sent the sparse crowd home unhappy and ruined the last home game for the 18 seniors playing their final game at Spartan Stadium.

However, thanks to another solid defensive effort and a late touchdown run from wide receiver Cody White, Michigan State got its seventh win by beating Rutgers, 14-10, in front of an announced crowd of 64,951 on a cold and rainy day in East Lansing.

“As I’ve said many times, it’s tough to win,” Michigan State coach Mark Dantonio said. “It’s a big win for our football program. Seventh win, we’ve been on that milestone here for a couple of weeks.

“Really happy for our football team, and our seniors, especially. We took a step forward today and we’ll see where it all shakes out in the bowl season. We just gotta keep getting better.”

Michigan State (7-5, 5-4 Big Ten) had already qualified for a bowl game, but how much Saturday’s victory affects its position in the Big Ten pecking order remains to be seen. Much will be determined by next weekend and the official announcements come out on Dec. 2.

For now, the Spartans will take solace in beating a Rutgers team that finished winless in the conference for the second time in three seasons. They did so despite punting the ball eight times and gaining 310 total yards.

“We play for what’s next and what’s next for us was seven (wins),” senior safety Khari Willis said. “We’ve been trying to get seven for three weeks, so it’s a huge win for us, regardless of how pretty or ugly it was. It was seven, and that’s what we needed.”

For Willis and the defense, it was pretty. But that’s been the case all season.

The Spartans limited the Scarlet Knights (1-11, 0-9) to 10 first downs and 217 total yards while giving up the only Rutgers touchdown in the first quarter after the offense failed to pick up a fourth-and-1 from the MSU 34.

“I laid it out all on the field,” said Rescigno, who starred at Warren De La Salle. “As a team we try our hardest. The guys gave a tremendous amount of effort and I'm so proud of all the guys on our team. We tried to go out with a win, and came up a little short. Is what it is.”

Michigan State pulled even with 7:04 to play in the second quarter when Rocky Lombardi connected with senior tight end Matt Sokol on an 18-yard touchdown pass to tie the score at 7. The Spartans took advantage of two Rutgers penalties — a pass interference call and a personal foul — to keep the drive rolling.

The Spartans wasted a chance late in the first half to take the lead after a punt hit Rutgers defensive back Saquan Hampton and was recovered at the Rutgers 13 by Xavier Henderson. But a personal foul on Michigan State’s Darrell Stewart on the next play pushed the Spartans back and forced a 30-yard field goal attempt. That went bad when the snap was mishandled by holder Brian Lewerke, who threw an interception while scrambling to make something out of the play.

“I thought we had maybe some catchable (passes) that were dropped. We had penalties that put us in bad situations that. Disappointing when it's a composure penalty,” Dantonio said. “When you're on the 2-yard line and you have a composure penalty, backed it up and he botches the snap, or the high snap and tries to get it down, we don't even get a field goal out of it, it's disappointing.”

It was more of the same in the second half as neither team could sustain a drive.

“We just couldn't seem to finish drives,” said Lombardi, who was 19-for-43 for 173 yards. “I'm not sure how many first downs we had, but it seemed like we were moving the ball OK, had decent yardage, not good enough but decent and we just couldn't finish drives. I felt like we had to drive down the field a lot, you know, it's tough, but you got to do it if you want to be a good team.”

In the fourth quarter, Rutgers at least was able to gain an advantage in field position and parlayed that into three points midway through the fourth quarter. After forcing Michigan State to punt from its end zone, the Scarlet Knights began a drive at the MSU 25. They couldn’t get a first down but Justin Davidovicz hit a 34-yard field goal to put Rutgers ahead, 10-7, with 7:52 to play.

After another drive stalled near midfield, Michigan State flipped the field with William Przystup’s punt was downed at the Rutgers 1. The defense responded with a three-and-out, forcing Rutgers to punt from its end zone.

“Will came up big with a big punt at the end of the game,” linebacker Joe Bachie said.

Brandon Sowards returned the ensuing punt to the Rutgers 35, and four plays later, White got the decisive touchdown with 3:57 to play.

“I got the ball on the reverse,” White explained, “and I saw Sokol make a great block and Tyler Higby had a kickout, then I saw green grass and it was a sigh of relief to me.”

Sophomore cornerback Josiah Scott put the game away in the final minute with his second interception of the game after Rutgers had moved deep into Michigan State territory.

“A win is a win and like I've said before, they all count one,” Dantonio said. 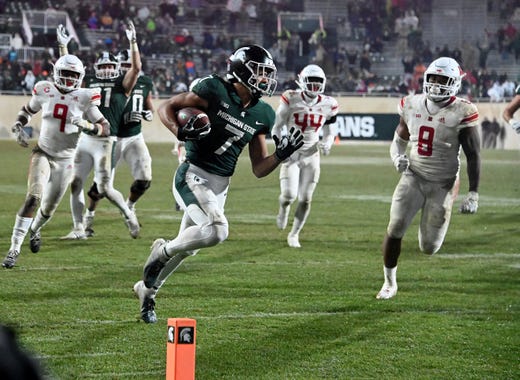 Connor Heyward carried the ball 19 times during the game including this play that netted a first down in the fourth quarter. Dale G. Young, Detroit News
Fullscreen 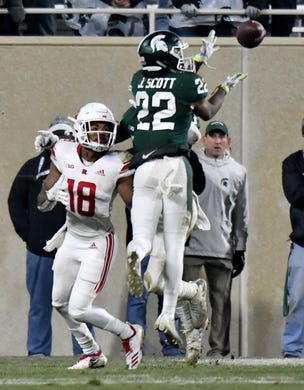 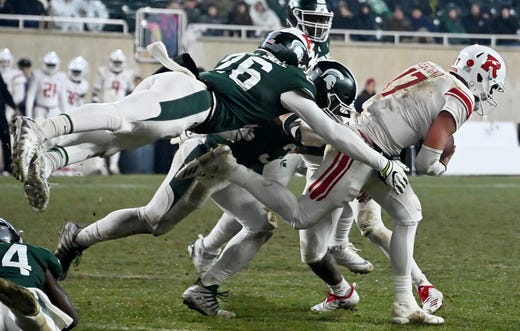 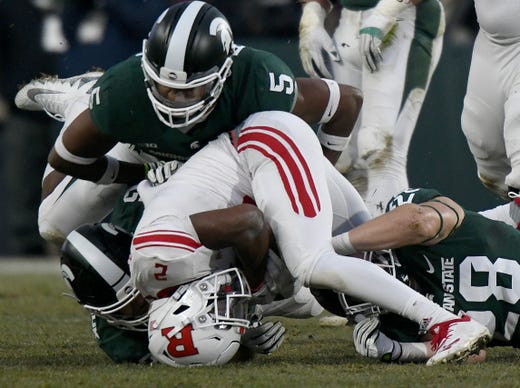 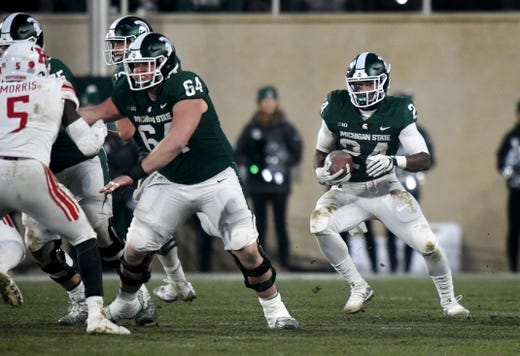 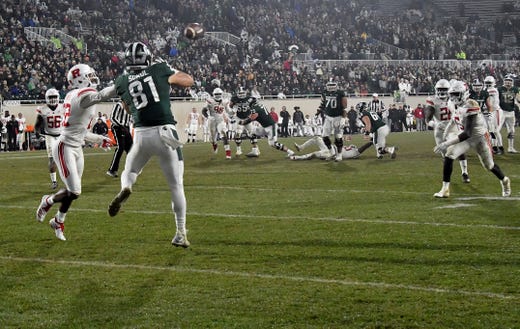 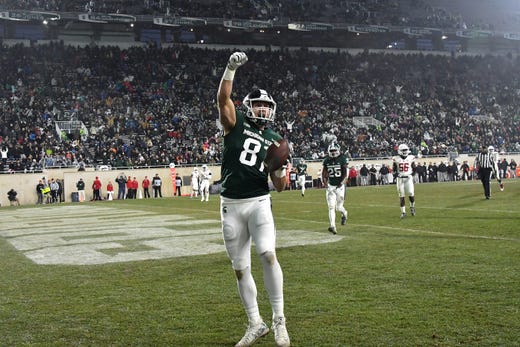 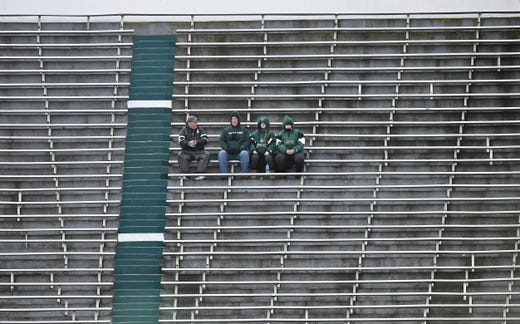 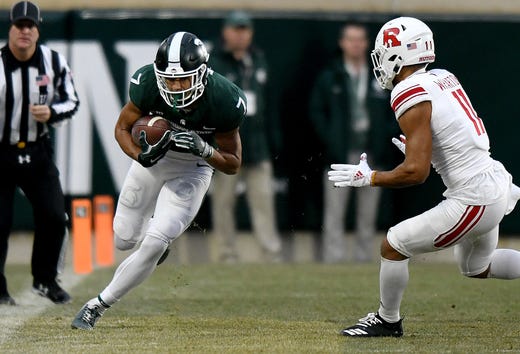 Michigan State's Cody White grabs a Rocky Lombardi pass and turns upfield for the Spartans' first first down of the game before he gets forced out of bounds by Rutgers's Isaiah Wharton (11). Dale G. Young, Detroit News
Fullscreen 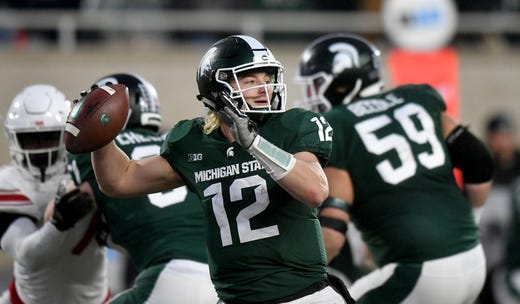 Rocky Lombardi uncorks a pass in the second quarter. Lombardi was 12-of-24 for 125 yards in the first half. Dale G. Young, Detroit News
Fullscreen 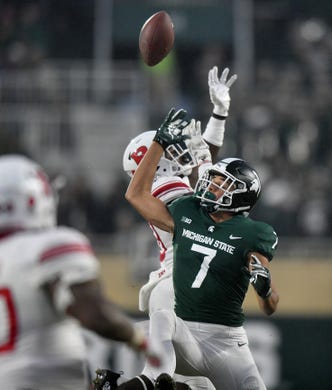 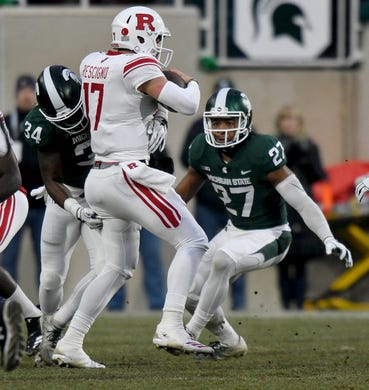 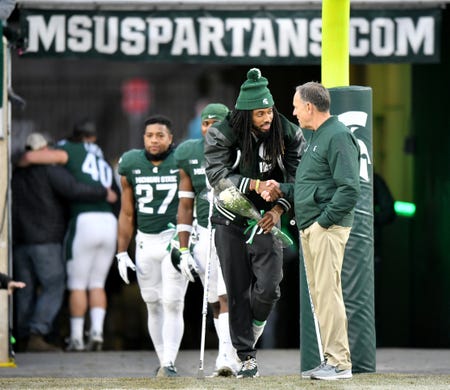 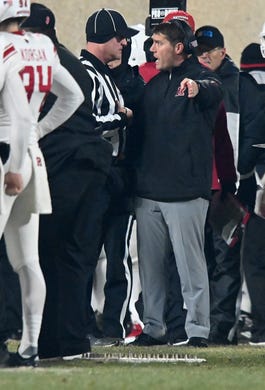 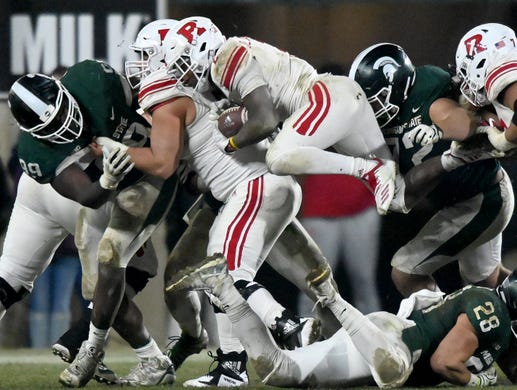 Rutgers' Raheem Blackshear flies through the air before being brought back to the ground with a thud by Spartans Raequan Williams (left) and Mike Panasiuk in the fourth quarter. Dale G. Young, Detroit News
Fullscreen 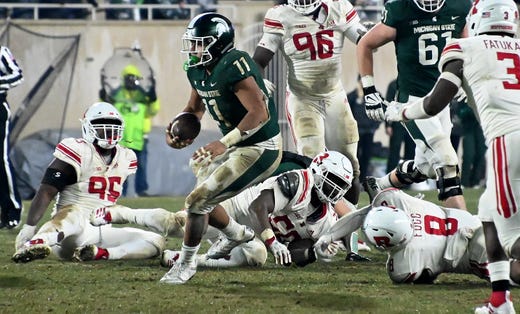 Connor Heyward (11) bursts through a hole in the line in the third quarter. Dale G. Young, Detroit News
Fullscreen

Rutgers Saquan Hampton is draped all over Michigan State receiver Cam Chambers, but gets away without a call in the fourth quarter. Dale G. Young, Detroit News
Fullscreen 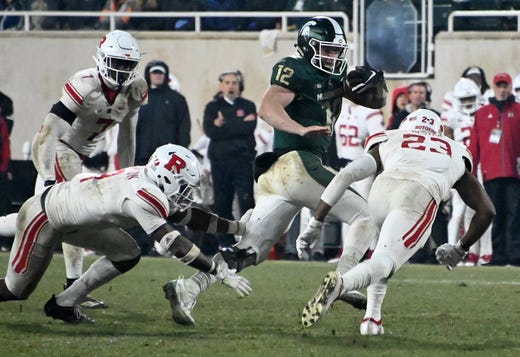 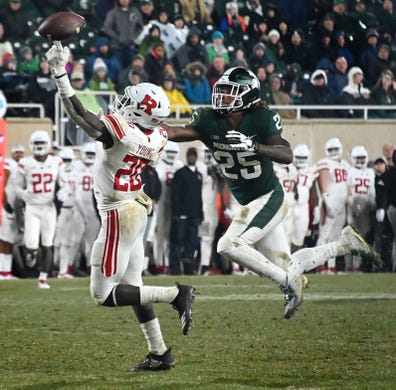 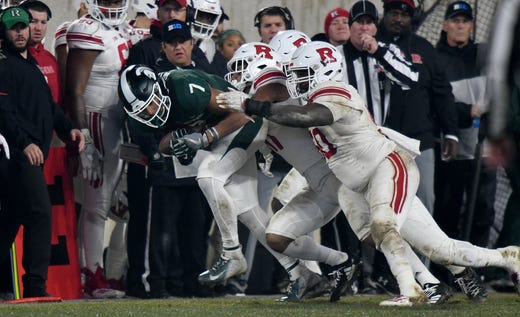 Cody White drags tacklers along with him as he stretches a pass play into a first down in the third quarter. Dale G. Young, Detroit News
Fullscreen 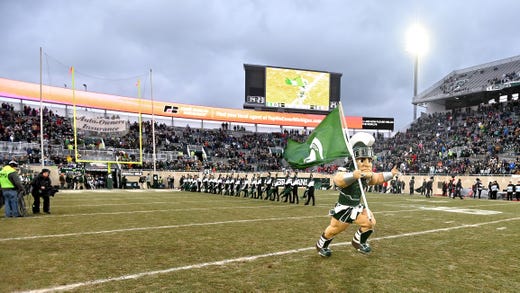 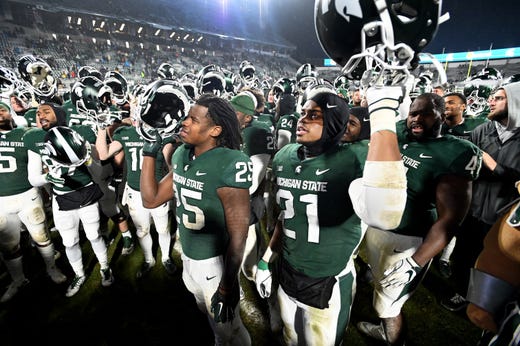 After the game, Darryl Stewart (25) and Cam Chambers (21) celebrate with their teammates and sing the fight song. Dale G. Young, Detroit News
Fullscreen 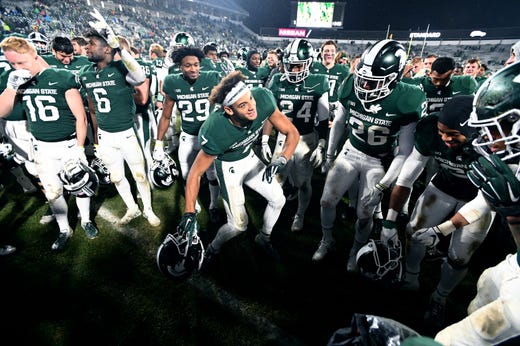 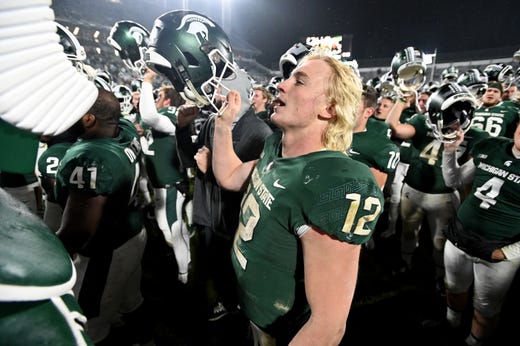 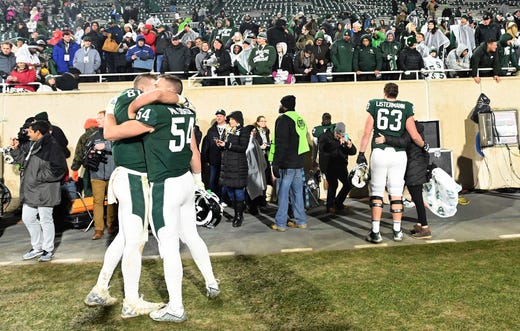 Brothers Matt Sokol and Mitchell Sokol hug in front of their family as MSU beats Rutgers, 14-10. Matt is a fifth-year senior, and this was his last game at Spartan Stadium. Dale G. Young, Detroit News
Fullscreen 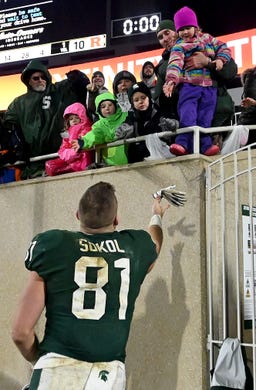 Senior Matt Sokol throws one of his gloves to a young fan after MSU beat Rutgers, 14-10, at Spartan Stadium in East Lansing on Nov 24, 2018. Dale G. Young, Detroit News
Fullscreen