Spartans (5-2) fail to close the game out late in regulation and lose, 82-78, to the Cardinals in the ACC/Big Ten Challenge.

Matt Charboneau on MSU's loss to Louisville The Detroit News 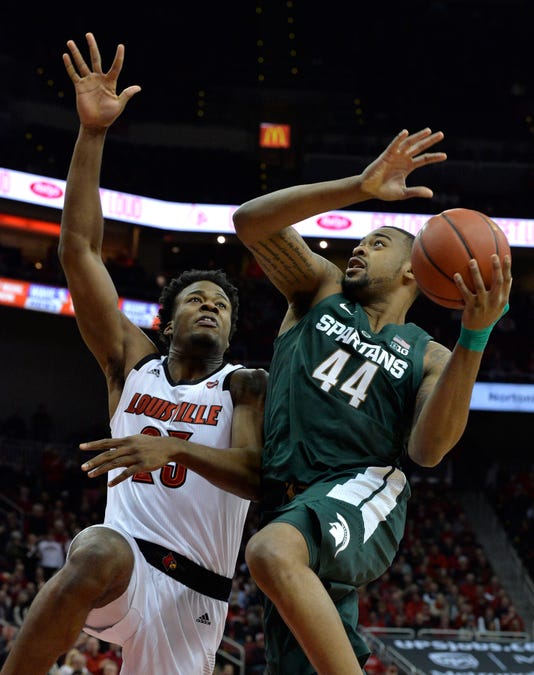 Add in a blown layup in overtime and it all added up to a big old batch of frustration for Michigan State on Tuesday night. And that was just the last six minutes of game time.

The Spartans were taking on Louisville in their first true road game of the season and had seemingly brushed aside another chunk of turnovers, Cassius Winston fouling out with four minutes to play and Matt McQuaid back in East Lansing with a deep thigh bruise.

Instead, No. 9 Michigan State will be lamenting its missed opportunities in an 82-78 loss in overtime at the KFC Yum Center as part of the ACC/Big Ten Challenge.

“Inches. Inches,” Michigan State coach Tom Izzo said. “I mean, poor Xavier, who I thought played his tail off. ‘Why you trying dunk that? Just lay it in.’ It was a game of inches. Josh had that rebound and if we just hold on to it, we got a timeout.

“Just did some things that weren’t good enough to win. Game of inches and we didn’t value the inches.”

Izzo was referring to Xavier Tillman’s missed dunk in overtime with Michigan State leading by one. Instead of extending the lead to three, he missed and Louisville answered with a 3-pointer. Izzo was also talking about Joshua Langford’s turnover with 13 seconds to play that allowed Louisville to tie the game at 67.

Of course, there were other chances to put the game away.

Freshman Foster Loyer, in for Winston, missed the front end of one-and-one with 36.7 seconds to play and the Spartans up one. This, coming from the player who made a state-record 119 straight free throws in high school at Clarkston. And with the game tied at 67 and eight seconds on the clock, Kenny Goins stepped to the line and missed the front end of one-and-one, even as his left eye was beginning to swell after getting hit on the previous possession.

“Turnovers, fouls, free throws,” Winston said shaking his head. “They gave us so many opportunities to win that game.”

There were opportunities and there were performances worthy of winning. Five players scored in double-figures and Goins grabbed a career-high 17 rebounds. Kyle Ahrens and Langford each had 15 points — a career-high for Ahrens — while Nick Ward scored 14, Winston had 13 and Tillman added 11 points and 13 rebounds.

More: Spartans show 'grit, toughness' as they head to Louisville

“We just did not look sharp,” Izzo said. “We did not do the things we needed to do. The turnovers early were, again, kind of ridiculous, and that's a shame because you can't overcome that. Free-throw shooting … that's the difference in a game. There were a lot of reasons we lost the game. We need to take responsibility for them.” 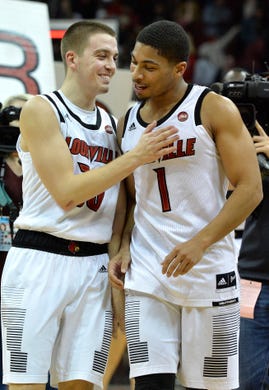 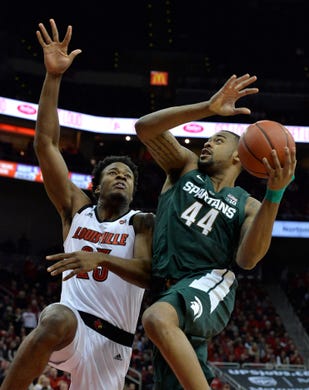 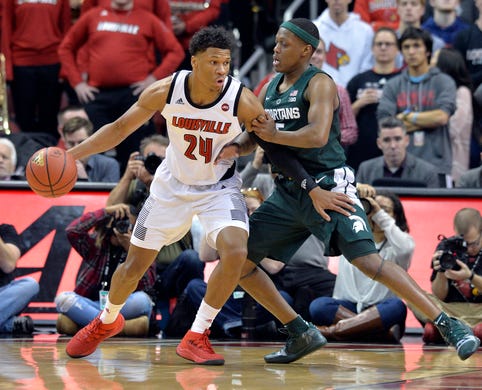 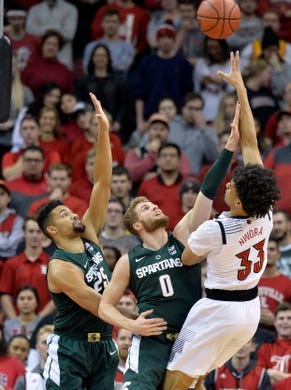 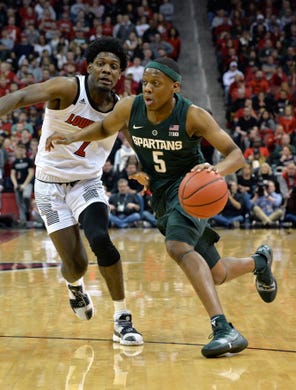 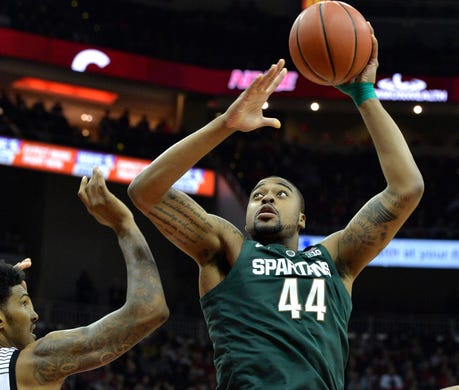 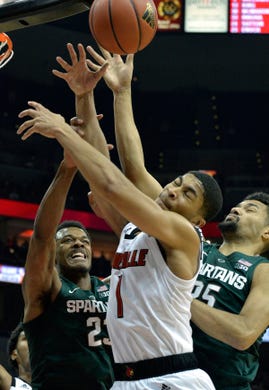 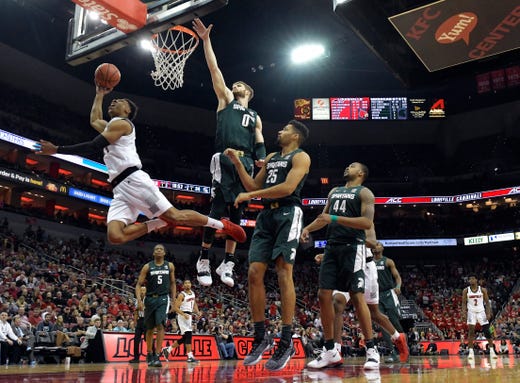 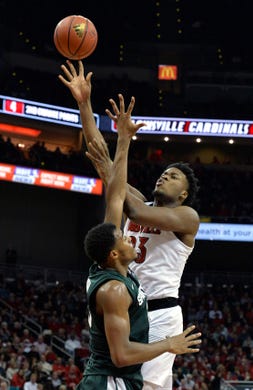 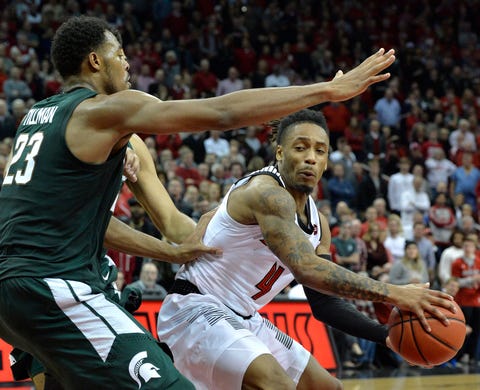 Louisville guard Khwan Fore (4) attempts to keep the ball away from the defense of Michigan State forward Xavier Tillman (23) during the second half. Timothy D. Easley, AP
Fullscreen 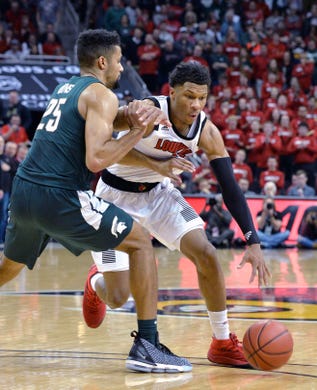 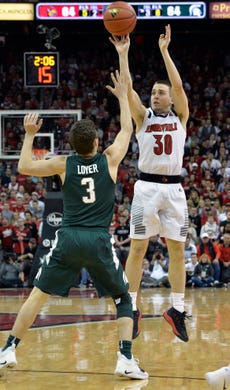 Louisville (4-2) had plenty to do with it, too. Guard Ryan McMahon scored 24 for the Cardinals while Jordan Nwora scored 14 and Dwayne Sutton and Christen Cunningham added 13 points each.

“I do want to thank our crowd. It was awesome. I love the Louisville faithful. They wanted a game like this, wanted some good news around here and happy that we could deliver against a very, very, well-respected opponent and one of the best teams in the country.”

Michigan State turned the ball over 11 times in the first half, leading to 13 Louisville points while Michigan State made just three of its first 13 shots and didn’t make a two-point basket until Aaron Henry grabbed an offensive rebound and scored on a short jumper with 5:28 left in the half.

MSU players talk about the team's 82-78 overtime loss to Louisville in the ACC/Big Ten Challenge. The Detroit News

Michigan State made several pushes in the second half, but each time the Spartans got close, the Cardinals responded. After trimming the deficit to four early in the half, Louisville hit two straight 3-pointers to extend the lead to 10. And after Michigan State pulled within 53-52 with 8:47 to play, Louisville answered by pushing the lead back to 58-52.

The Spartans got back within one before the Cardinals got three free throws from McMahon. But a triple from Langford and a mid-range jumper from the junior guard gave Michigan State the 62-61 lead, its first since 8-7.

A McMahon 3 put Louisville back up two, but Langford hit another jumper to even the score at 64 with 2:27 to play. Loyer then hit a running jumper with 1:44 to play to give MSU a 66-64 lead. McMahon answered with a pair of free throws to tie the game with 1:19 left.

Ward split a pair of free throws with 1:07 left to give MSU a one-point lead and the Spartans then got a stop at the defensive end. But Loyer missed the front end of a one-and-one and Cunningham split a pair at the other end to tie the game at 67 after Langford’s turnover.

“I didn’t know we had a timeout,” Langford said. “I take the blame for that.”

Goins grabbed the rebound on Cunningham’s miss and was fouled, but he, too, missed the front end with eight seconds to play and Louisville couldn’t get a decent shot off, sending the game to overtime.

It was back and forth in the extra session until Louisville got the advantage late on a 3-pointer from Nwora with 2:05 left after Tillman’s missed dunk. The Cardinals added a free throw 30 seconds later to push the lead to three with 1:27 to play. Langford’s 3then came up short and Louisville put the game away at the free-throw line despite a late 3-pointer from freshman Gabe Brown.

“Tonight, we didn’t do the little things,” Izzo said. “Maybe we’ll learn from it, maybe we won’t.”