Matt McQuaid's absence and the possibility of losing Justin Layne and Raequan Williams were among the topics in this week's Michigan State mailbag. 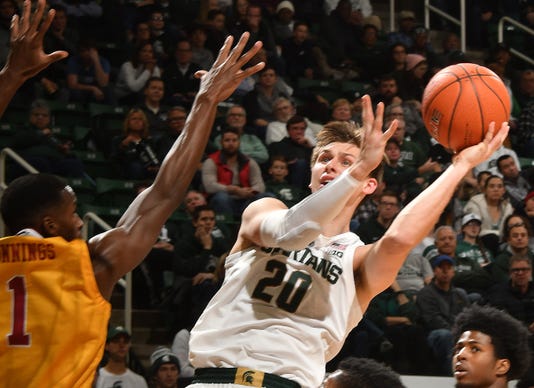 Michigan State was without guard Matt McQuaid in Tuesday's loss to Louisville, and he was missed.(Photo: Dale G. Young, Detroit News)

With basketball taking center stage, plenty of the attention in this week’s Michigan State mailbag turns to the hardwood and how the Spartans bounce back from the loss at Louisville, and what is the status of senior guard Matt McQuaid.

That doesn’t mean football is out of the picture, as folks continue to wonder about potential coaching changes as well as bowl destinations, and if the Spartans will lose anyone early to the NFL Draft.

We tackle all those issues this week in the mailbag.

►Question. After (Tuesday) night’s game, am I the only one who realizes how critical Matty McQuaid is?! Defense, ball handling, threes. When is he coming back?! I’m going to miss him. I’m not crying, you’re crying. — @RealKyleHoward

►Answer. I’m not sure I’ve ever seen that much love for Matt McQuaid. But your point is well taken. Even though some of the offensive numbers haven’t been quite what the Spartans have hoped for so far, McQuaid brings plenty of value, not the least of which is keeping Cassius Winston from playing nearly every minute. The fact is, Foster Loyer isn’t ready for a big role just yet, so that leaves McQuaid as the first option in spelling Winston. No, he’s not a prototypical point guard, but he is serviceable and can get the Spartans through a few minutes. He’s also arguably their best perimeter defender.

So, no, Matt McQuaid isn’t going to be an All-American, but it was clear in the loss to Louisville that he is integral to Michigan State’s success. You could hear it talking to the players after the game and at practice on Wednesday — they need McQuaid back. When will he be back? Good question. My best guess is Monday at home against Iowa, at the earliest.

►Q. Is Ward truly getting more minutes this season?  I thought he was on the bench for crucial times vs UCLA & Louisville. Maybe there’s some matchup issues?  It hasn’t been foul trouble. — @sacohoon 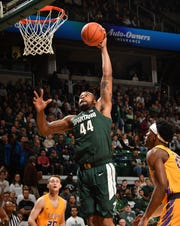 ►A. Strictly by the numbers, Nick Ward’s playing time is up only slightly, averaging 20.7 minutes through seven games after averaging 19.8 as a freshman and 18.9 last season. However, that number is skewed a bit after playing just five minutes before getting hurt vs. Louisiana-Monroe. So, in the six games he’s played the whole way, Ward is averaging 23.5 minutes a game and he’s never played less than 20 minutes.

Ward is never going to be a 30-minute guy. He plays hard and at his size, he needs a few more breaks than some smaller players. And yes, some matchups are tough, and teams are putting a lot of emphasis on not letting him get the ball in deep. Some teams have been better at it than others, but there are no signs there are any issues with Ward, who will continue to be a focal point of the offense.

More: Injuries behind him, Kyle Ahrens takes off for Michigan State

►Q. Was the loss to Louisville a "good loss" due to the teaching opportunities? — @mbinkowski

►A. I guess, in the sense that the only “bad loss” is when you play well and just get beat by a better team. The Louisville game had tons of teaching points for Tom Izzo. From valuing the ball, to understanding situations (timeouts remaining) to free-throw shooting to counting on every player on the roster. There are more, like making layups and not committing silly fouls and all of them will be getting emphasized. The good news is, when talking to the players, they didn’t need a coach yelling to understand the mistakes they made. They realized it right away. The crucial step will come if they figure out how to not let them happen again.

►A. Out of that group, the most likely to leave early would either be Justin Layne or Raequan Williams. I’d bet pretty heavily on Kenny Willekes and Joe Bachie both being back, and it has nothing to do with production, seeing as Willekes was just named the Big Ten’s defensive lineman of the year and Bachie again led MSU in tackles and was first-team All-Big Ten. The issue here is what the NFL sees in terms of potential with a long, athletic cornerback in Layne and a physical, disruptive defensive tackle with Williams.

Layne and Williams are both moving quickly up draft rankings, with Layne being listed as the No. 10 cornerback by ESPN’s Mel Kiper Jr. Does it mean they’re leaving? Not exactly, but it’s sure worth watching for both. Outside of Layne and Williams, though, I don’t see anyone else potentially leaving. 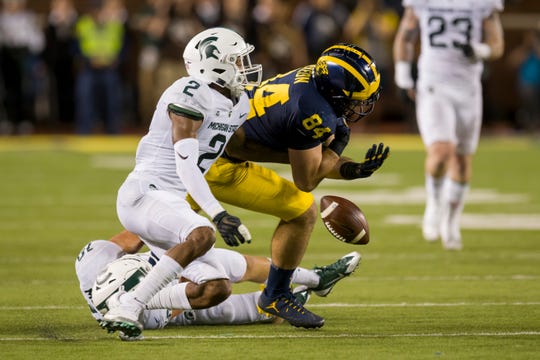 ►Q. Way too early predictions/expectations for football in 2019? Have to think they’ll be a lot lower than 2018 — usually a good thing under MD, right? — @bernst27

►A. I don’t think there’s any doubt they’ll be lower after what we saw on the offensive side of the ball this season. And yes, Mark Dantonio usually does well when expectations are low. But how low they’ll be I’m not quite sure. Assuming Layne and Williams come back, the Spartans will again have one of the best defenses in the country and if the offense only improves to being average, it could lead to a dramatic turnaround. Think about 2013. Michigan State had a dominant defense and an OK offense and won 13 games, the Big Ten title and the Rose Bowl. Am I predicting that? No, but it doesn’t seem outrageous.

►Q. OK, so when is DW gonna resign or get fired? Thanks, asking for the whole #SpartanDawg fan base. — @thingsMorgsays1

►A. After the Rutgers game, Dantonio didn’t sound like a guy ready to pull the trigger on any staff moves. I know that drives some fans crazy, but I’ve been saying for a while I wouldn’t expect any significant changes, including co-offensive coordinator Dave Warner. Who knows? Maybe Dantonio will shock us all, but making these sorts of moves just isn’t in his DNA. For better or worse, he’s loyal and he believes he and his staff can right the ship. We’ll see.

►A. Obviously, Bonamego has a special-teams background and Michigan State, in my opinion, could use a coach focused solely on special teams. But like I’ve said relative to Warner’s status, I don’t see changes coming. Really, outside of punt returning, Michigan State was fine on special teams. Would you like to see Dantonio go ahead and take a chance with a few potential game-breakers returning kicks? Sure, but that wouldn’t change with a new special-teams coach. Dantonio would still lean conservative and secure possessions.

►Q. What bowl game? Do any football players have the potential of leaving early because of projected draft status?  Prognosis on Lewerke’s shoulder? — @SpartanCenterig

►A. As for the player leaving early, we already hit that. Bowl game? Right now, I’ll say Gator Bowl on Dec. 31, but Outback on Jan. 1 and Pinstripe on Dec. 27 are also possible. With Brian Lewerke, that’s a guess because we’ve never been told exactly what is wrong. My hunch is he starts the bowl game at close to 100 percent and will be at that point, for sure, by the time spring practice starts.