Weary MSU (8-2) commits 15 turnovers but come away with a 63-59 win on the road against Florida on Saturday.

Matt Charboneau on MSU's win at Florida The Detroit News 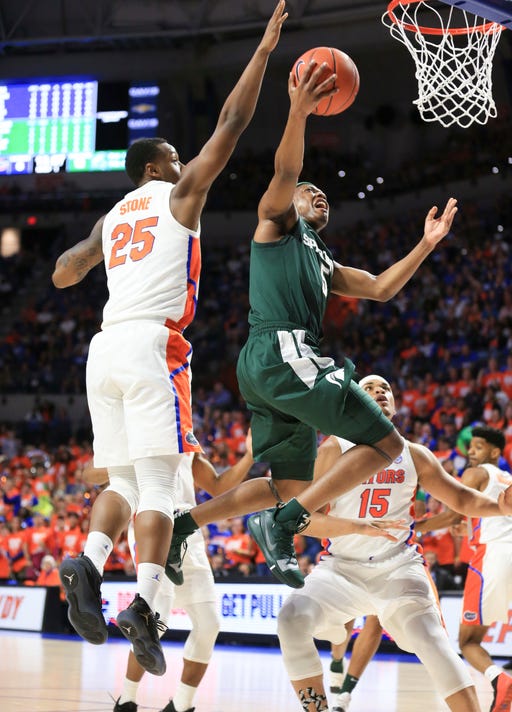 Gainesville, Fla. — For the first time in the last couple of weeks, Tom Izzo thought his team was out of gas.

As the seconds ticked away and the lead dwindled Saturday afternoon at Florida, the Spartans were feeling the effects of a six-game stretch that included five games away from home, including trips to Las Vegas, Louisville and Rutgers.

“We talked about how Florida is physically tough,” Izzo said. “They are very good with athletic, big guards. I thought they really came at us early, but we put on the board that it would have to be a day of incredible toughness. It was more important coming in here and seeing the (atmosphere), but it was the mental toughness and I thought the mental toughness is what you lose when you’re fatigued and that’s what it looked like to me.”

Instead of finding a way to lose, however, like earlier in the season at Louisville, Michigan State overcame that fatigue and found a way to win as junior Kyle Ahrens scored the last seven points, including a dunk at the end of the shot clock with 9.4 seconds to play to secure a 63-59 victory.

“It wasn’t the prettiest game and I think Florida had a lot to do with that,” Izzo said. “There was a point where I thought we could widen the lead, but we made some critically dumb plays and they made some very good plays. I thought all of us (struggled), including me. I don’t think I called a great game.

“I’m just proud of my guys for the six games. This was one of the more incredible stretches in my career as far as number of games against good people, on the road in a short period of time. So, I’m gonna take the win and get out of here and realize we did not play great and blame me some and give Florida credit.”

Ahrens was the hero late, helping the Spartans (8-2) make up for 15 turnovers and allowing 16 offensive rebounds. Xavier Tillman matched a career high with 14 points to lead Michigan State while Nick Ward and Joshua Langford scored 13 each and Cassius Winston added 10.

Andrew Nembhard and KeVaughn Allen scored 13 each for Florida (5-4).

“They are a difficult team that stays in the gaps and grinded us down,” Allen said. “For us, shots weren’t falling today but we have to stay the course.

More: Spartans hope to move forward as they take a step back

That poor shooting for Florida (5-4) was evident in the first half as the Gators made just three of their first 19 shots, failing to take advantage of Michigan State turning the ball over 11 times while grabbing nine offensive rebounds.

Meanwhile, the Spartans were feeding Ward, who was unstoppable in the first half as he had nine points in the opening 20 minutes. However, the Spartans were unable to extend their lead beyond 10, though, as 10 turnovers came in the last 12 minutes.

Florida made a late push in the first half, making five of its final nine shots, twice cutting the deficit to three points. But Michigan State pushed the advantage back to 10 on Tillman’s layup with 1:53 to play before two free throws from Florida’s Kevarrius Hayes trimmed it to 35-27 at the break.

“I thought Nick was a monster early and did a lot of good things,” Izzo said. “He struggled a little bit defensively, which is why we had him out a little bit.”

After Michigan State extended the lead to 12 to open the second half, Florida used a 12-4 run to pull within 43-39 with 13:35 to play. The Spartans pushed back but were unable to shake the Gators, who got it down to 52-50 in a three-point play from Hayes with 4:57 to play. But Michigan State got a jumper from Langford and a jump-hook from Tillman as the shot clock expired to go up, 56-50, with 3:46 left in the game.

Florida continued to storm back and got within 61-59 after four straight points from Nembhard, the last a drive for a layup with 1:27 to play. But after getting a defensive stop, Ahrens picked up a loose ball and dunked with 9.4 seconds to play and put the game away.

“I think it shows a lot of maturity with this team and how much we matured since the first Kansas game,” Langford said. “For everybody across the board to pitch in how they did tonight. One of the guys that sticks out is Kyle having the last seven points in the second half. Aaron Henry, Xavier Tillman had a big game. Everybody across the board all chipped in and it speaks volumes about how good a team we have.”

Michigan State now gets a bit of a break as it doesn’t return to action until next Sunday when it hosts Green Bay. It’s one of three games the rest of the month, including visits from Oakland and Northern Illinois, until Big Ten play picks up again after the first of the year.

“(The break will) be huge,” Winston said. “We’ll do a better job of bringing the freshmen along so they can play some more valuable minutes. We’ll get better as a team with a lot of time to work on us and that’s always good for us.” 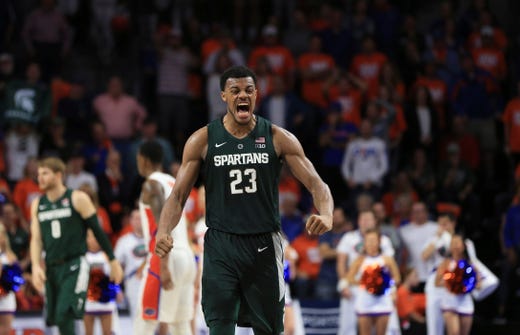 Michigan State forward Xavier Tillman (23) celebrates after a dunk by forward Kyle Ahrens late in the second half of a 63-59 Spartans victory over the Florida Gators Saturday, Dec. 8, 2018, in Gainesville, Fla. Matt Stamey, AP
Fullscreen 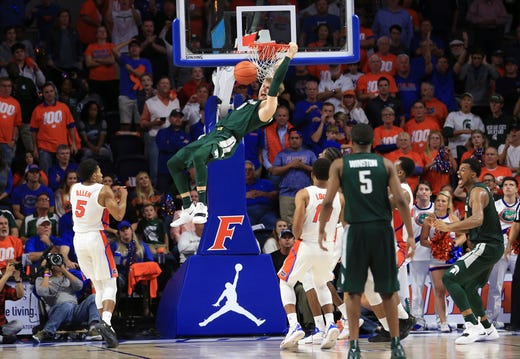 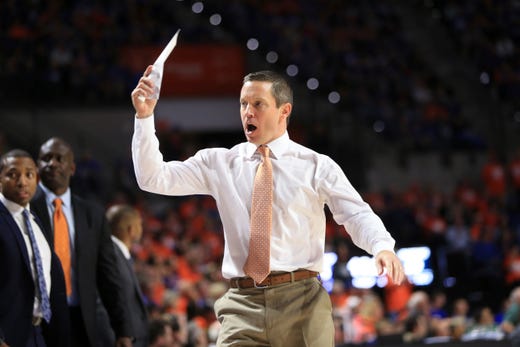 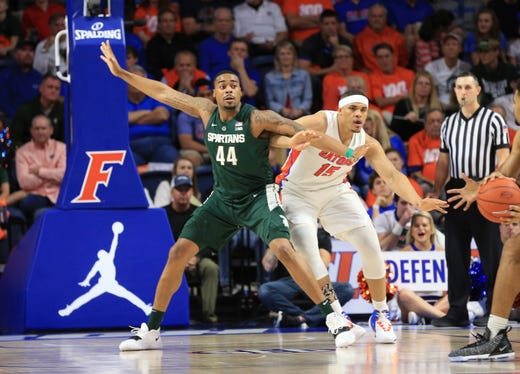 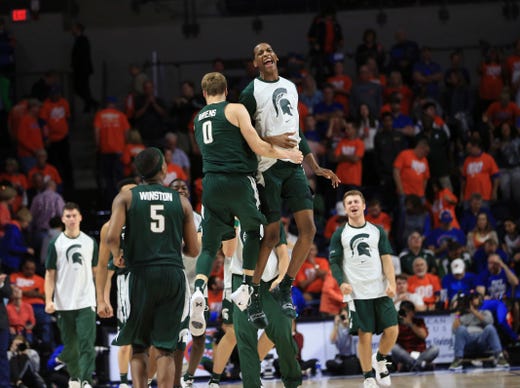 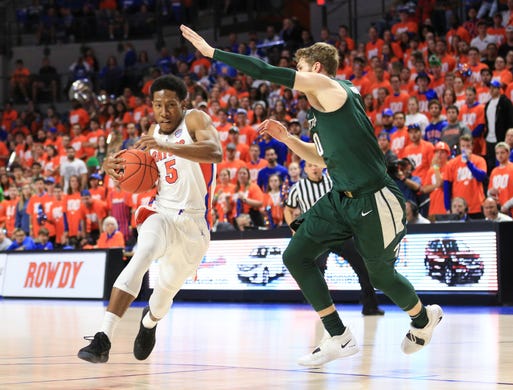 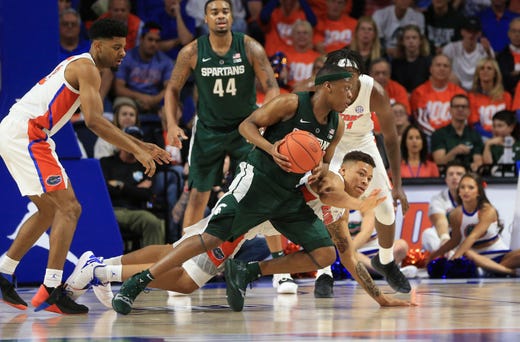 Michigan State guard Cassius Winston (5) comes up with the ball past a diving Florida forward Keyontae Johnson (11) during the second half. Matt Stamey, AP
Fullscreen 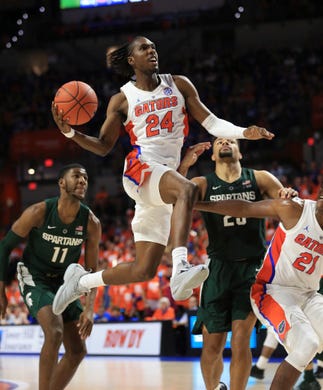 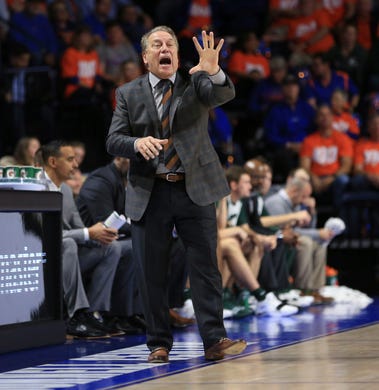 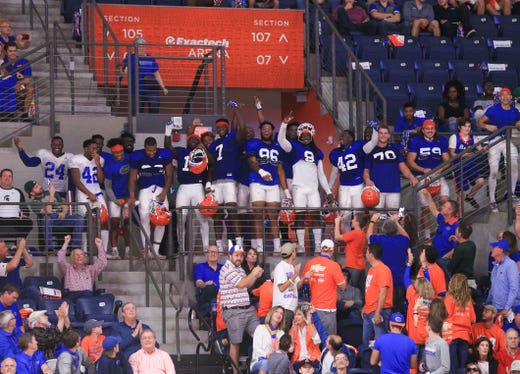 Members of the Florida football team watch the final minutes of the game against Michigan State during the second half. Matt Stamey, AP
Fullscreen 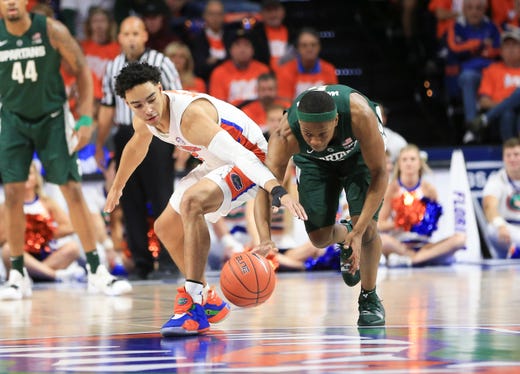 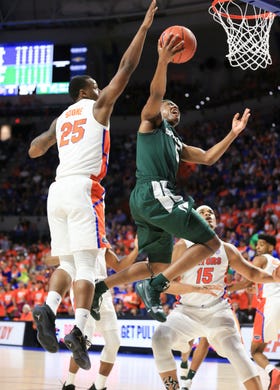 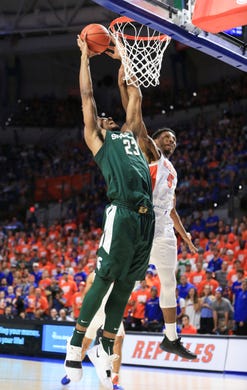 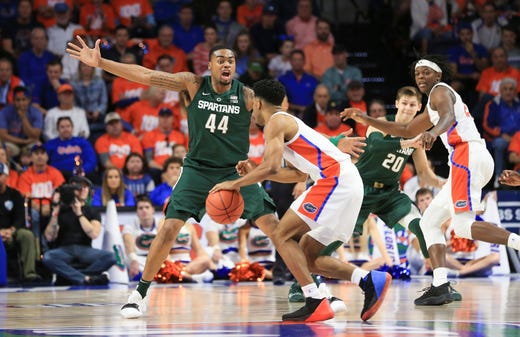 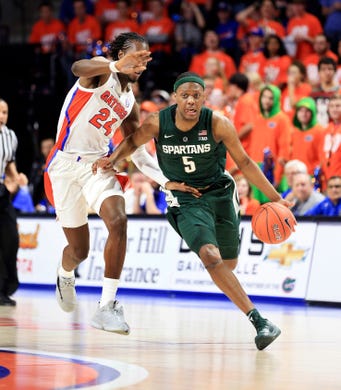 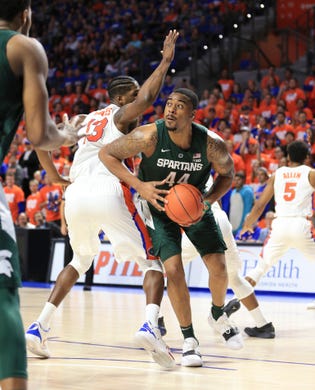