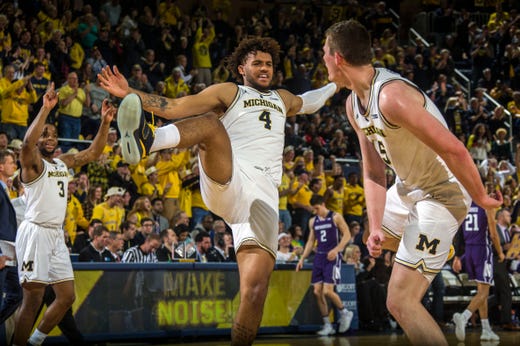 Go through the gallery to view the Detroit News Big Ten Power Rankings for the week of Jan. 14, compiled by Matt Charboneau.  Tony Ding, AP
Fullscreen 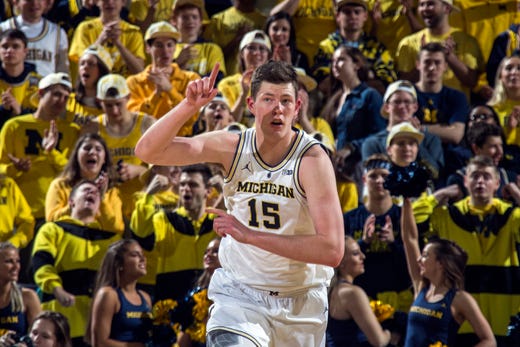 1. Michigan (17-0, 6-0) – The resumption of Big Ten play has officially got the Wolverines playing like one of the best teams in the country again. After just getting by late in nonconference play, Michigan has been cruising along in the conference, getting past a pesky Illinois team on the road before rolling over Northwestern at home on Sunday night. The only game this week will be an interesting one as the Wolverines head to Wisconsin on Saturday. Last week: 1 Tony Ding, AP
Fullscreen

2. Michigan State (15-2, 6-0) – The Spartans are down two key players as Joshua Langford has missed four games with an injured ankle and Kyle Ahrens sat out Sunday’s game at Penn State with a bad back, but it has not slowed them down. They’ve won 10 straight, despite a sloppy performance Sunday at Penn State. Another tough road test is next as Michigan State travels this week to Nebraska for its only game. Last week: 2 Chris Knight, Associated Press
Fullscreen

3. Maryland (14-3, 5-1) – It was a big week for the Terrapins, who beat Minnesota on the road before outlasting a ranked Indiana team at home to extend their winning streak to five games. The Terps are young but have plenty of talent and look to be a team that will at least hang around and make life tough for the conference leaders. Last week: 6. Patrick Semansky, AP
Fullscreen 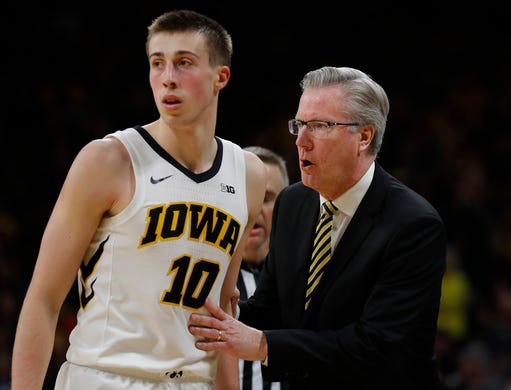 4. Iowa (14-3, 3-3) – The turnaround has been quick and impressive for the Hawkeyes, who opened Big Ten play with three straight losses, two of them being one-sided. So, the fact Fran McCaffery got his team to respond with three consecutive wins has resurrected hope in Iowa City. Two of the three victories came over ranked teams and the third was on the road as Iowa looks to build momentum this week against Penn State and Illinois. Last week: 9 Matthew Putney, AP
Fullscreen 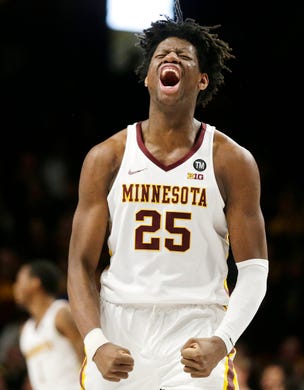 5. Minnesota (13-3, 3-2) – The Golden Gophers were rolling, having won six straight, including a victory at Wisconsin, before falling at home to Maryland. They got back on track by beating Rutgers and will get a break from the schedule makers as Illinois and Penn State are up this week, affording the Gophers a chance to bounce back and stay in the hunt. Last week: 3 Andy Clayton-King, AP
Fullscreen 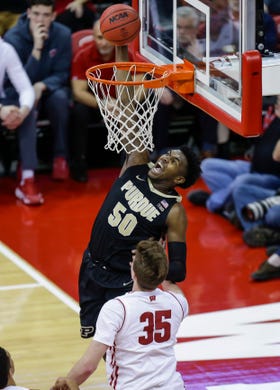 6. Purdue (10-6, 3-2) – It was a tough week for the Boilermakers as they had games at Michigan State and at Wisconsin. After playing poorly in the loss at Michigan State, Carsen Edwards exploded for 36 points to lead Purdue to an overtime victory at Wisconsin. The week perfectly summed up the Boilermakers this season – if Edwards is rolling, so are they. Last week: 8 Andy Manis, AP
Fullscreen

7. Indiana (12-4, 3-2) – Things were going well for the Hoosiers heading into last weekend’s showdown with Michigan. However, two losses later, Archie Miller’s group is desperate for a win after losing by three on the road against Maryland. It won’t be a simple task this week as the young Hoosiers team gets Nebraska at home before heading to Purdue. Last week: 5 Patrick Semansky, AP
Fullscreen 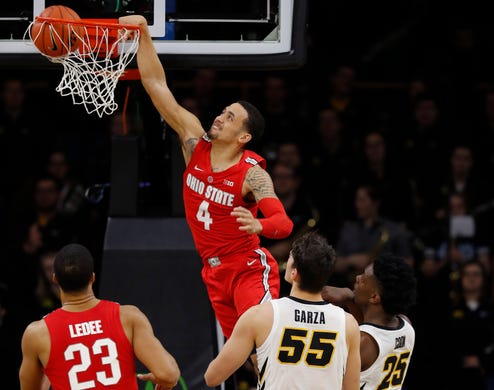 8. Ohio State (12-4, 2-3) – The Buckeyes are another team that has seen things go the wrong direction in rapid fashion. Entering last weekend’s game with Michigan State, the Buckeyes were a top-15 team tied atop the Big Ten. But they’ve lost three in a row since then, including at Rutgers and Iowa to extend the skid. Getting back on the winning side this week will be a challenge as Maryland and Purdue both come to Columbus. Last week: 4 Matthew Putney, AP
Fullscreen 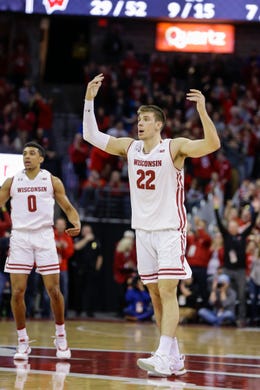 9. Wisconsin (11-5, 3-2) – Things have gone off the rails a bit for the Badgers as Big Ten play has resumed. After a loss to Western Kentucky to cap off non-conference action, the Badgers have lost two of three, falling to Purdue in overtime on Saturday. Ethan Happ continues to play like the conference player of the year, but the rest of the roster has been unable to perform consistently. Last week: 7 Andy Manis, AP
Fullscreen 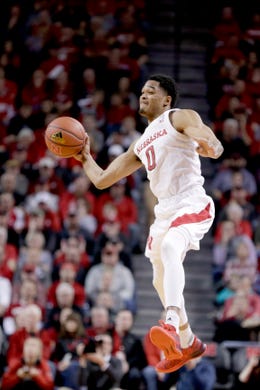 10. Nebraska (12-4, 2-3) – The Cornhuskers continue to be the team everyone is waiting for to start playing like a conference contender. Instead, the Huskers lost two straight at Maryland and Iowa and just got by Penn State at home to avoid a third straight loss. This week doesn’t get any easier as the Huskers hit the road to take on Indiana before hosting Michigan State. Last week: 10. Nati Harnik, AP
Fullscreen 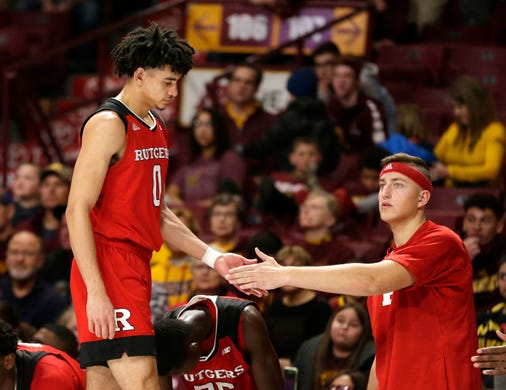 11. Rutgers (8-7, 1-4) – It will have to be minor victories this season for Steve Pikiell’s young group, and the Scarlet Knights got a significant one last week by knocking off Ohio State. The momentum was lost a few days later, though, with a loss at Minnesota, but the Scarlet Knights are showing some signs of being a tough out in conference play. They won’t finish in the top half of the standings, but there could be a few more upset wins down the road. Last week: 13 Andy Clayton-King, AP
Fullscreen 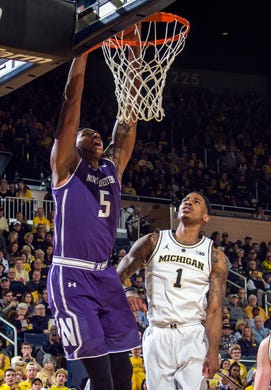 12. Northwestern (10-7, 1-5) – It wasn’t that long ago the Wildcats were feeling good about losing to Indiana and Michigan by two points each. Those days seem like a distant memory as the Cats got blown out in the rematch with the Wolverines on Sunday night, capping a week where they nearly lost at home to Illinois, which is winless in the Big Ten. Last week: 11 Tony Ding, AP
Fullscreen 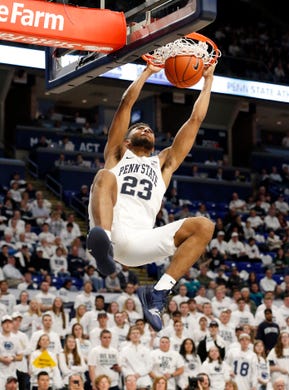 13. Penn State (7-10, 0-6) – The Nittany Lions nearly earned their first victory on the road at Nebraska before falling short, a game that turned out to be the highlight of the week as they capped things at home with a lackluster loss to a short-handed Michigan State team. The energy around the program has all-but evaporated making it tough to see a point where coach Pat Chambers turns things around. Last week: 12 Chris Knight, AP
Fullscreen 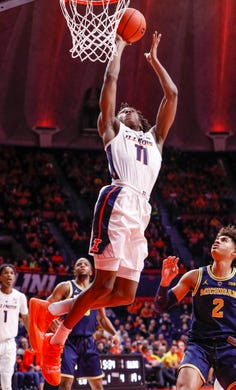 14. Illinois (4-12, 0-5) – The Fighting Illini keep piling up the losses, but they’re not making it easy on the other teams in the Big Ten. After nearly getting a road win at Northwestern last week, the Illini pushed undefeated Michigan for 40 minutes only to come up short. Right now, the talent isn’t there, meaning finding a win on the schedule is tough as Minnesota and Iowa are up next this week. Last week: 14. Michael Hickey, Getty Images
Fullscreen 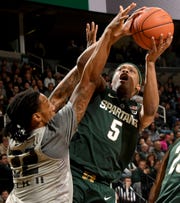 A big reason why has been the play of junior point guard Cassius Winston, who on Thursday was named to Sports Illustrated's midseason All-America second team.

"Winston is the engine that makes the sixth-ranked Spartans go," Sports Illustrated writes, "ranking fifth nationally in assists with 7.4 (per game)."

"(Winston) has become even more invaluable of late after an injury to backcourt mate Joshua Langford," Sports Illustrated writes.

Langford is expected to miss his fifth straight game Thursday night with an ankle injury, while Ahrens was sidelined in Sunday's game at Penn State with a sprained back.