In the one-and-done era of college basketball, rarely are freshmen allowed time to mature into solid basketball players. 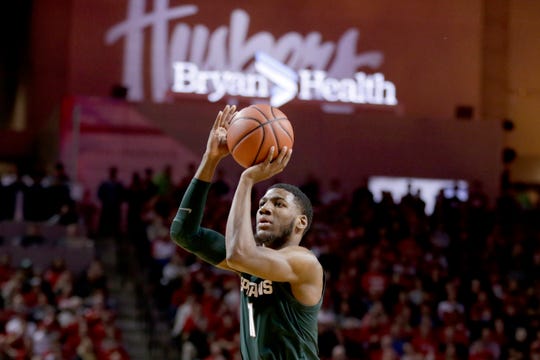 In the one-and-done era of college basketball, rarely are freshmen allowed time to mature into solid basketball players.

Instead, nearly every first-year player is judged against the select few that are using college as merely a pit-stop for one season, ready to head to the NBA after likely picking up plenty of individual accolades during their short time on whatever campus they might call home.

It’s something Michigan State coach Tom Izzo talks about all the time, reminding everyone there is “a process” for most freshmen, and expecting too much too soon often ends in frustration.

That’s been his refrain this season when it comes to the Spartans’ first-year players, namely Aaron Henry, Gabe Brown and Foster Loyer, the three players in a five-man class that are seeing regular playing time. Izzo has had the luxury of leaning on an experienced roster as he has allowed the freshmen to develop. But recent injuries to juniors Joshua Langford and Kyle Ahrens have forced an acceleration in that process.

After No. 6 Michigan State’s 70-64 victory Thursday at Nebraska, it looks like Henry and Brown are right on schedule. They each logged career-high minutes on Sunday at Penn State, and in the win at Nebraska, each played key roles in the victory.

Henry finished with nine points, igniting a late run by hitting an open 3-pointer then converting on a fast break where he almost turned the ball over.

“There really wasn’t much going through my mind at the time,” Henry said of the critical shot that helped the Spartans pull away. “I was open. I just let it fly. I work on that shot every day, so it wasn’t like a different feeling. It was just a bucket we needed.”

Brown’s improvement wasn’t as evident in the box score – he had three points and four rebounds – but it was his overall game that has picked up. He defended well against the Cornhuskers, didn’t hesitate to shoot and didn’t take a bad shot.

His three points were impressive, as well, as Brown attacked the basket on the break, finished and got fouled. He made the free throw to convert the three-point play.

For both Henry and Brown, it was another game where each showed the potential that is out there for each, even if it will take some time to get there.

The last two games have been vital in their progress as both have been road victories, though the raucous environment at Pinnacle Bank Arena on Thursday was a much bigger test, one Henry and Brown did enough to pass and help the Spartans (16-2, 7-0 Big Ten) win their 11th straight.

“I told them, ‘This will be one of the best places you’ll ever play in,’” Izzo said. “When it got loud, in the locker room, I told them after, ‘How did you think that was, and were you ready for that kind of intensity on the road?’ The freshmen weren’t but it’s not all their fault, they’re just learning.

“That was a big shot by (Henry) and we got big minutes from Gabe.”

Both Henry and Brown feel like they’re just starting to find a rhythm, one that should only continue to grow as Langford’s status remains a long-term question mark while Ahrens could be back by Monday’s game against No. 19 Maryland, though there are no guarantees.

“This game was very important for me,” Brown said. “I wanted to go out there and play with energy, play under control, be focused and ready to lock in.

“I feel like I’m OK, doing good right now. I just got to continue to keep working.”

The same goes for Henry, who has had more opportunities than Brown as part of the regular playing rotation all season. But he believes he made quite a jump from the Penn State to the win Thursday at Nebraska.

“This was a tough environment and it was good for the experience,” Henry said. “But as the game went along and when the emotion died down it’s just basketball and I feel like I play at a high level when it comes down to that.”