Izzo says ESPN, which had extensive coverage of the Larry Nassar sexual assault scandal, coming to East Lansing for Saturday's game is "a privilege." 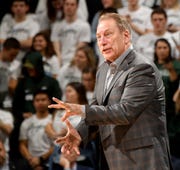 East Lansing — ESPN is bringing its signature college basketball show to Michigan State on Saturday, and there are plenty of fans out there who aren’t happy about it.

Michigan State coach Tom Izzo, however, believes a critical step can be taken when College GameDay airs at 11 a.m. Saturday from the Breslin Center.

“I think it’s part of healing process, I really do,” Izzo said on Tuesday. “And I think the best way we can show that is the support we give our players, our players on the floor, our program.”

There are plenty of mixed feelings around campus when it comes to the network that stirred controversy a year ago. It came in the wake of the Larry Nassar sexual assault scandal that led to the resignation of university president Lou Anna K. Simon, when ESPN published a report that said there was a history of the school and its athletic department of essentially covering up incidents of sexual assault in football and men’s basketball, its two biggest programs.

Just days after the original report was published by ESPN, “Outside the Lines” presented a graphic that included Izzo and Dantonio with Nassar and the title “Hidden Secrets.”

It angered many, including football coach Mark Dantonio, who immediately denied any wrongdoing, and Izzo, who this fall said the idea he would cover anything up “makes me sick.”

However, that feeling can’t exist forever, Izzo said, and that’s what Saturday can help with.

“I’m a leader of this place right now, of this part, and the leadership in me says that whatever went wrong — there were a lot of people injured, hurt because of it — and then you have to heal,” Izzo said. “And for me, this is part of the healing process. ESPN coming here and their basketball part of it, their show that only goes to eight universities in the country in a year, I think is a privilege that hopefully we’ll take advantage of and continue to heal and continue to mend.

“Everyone has got their own opinion and I’m just asking you to take a look at mine.”

Things are made easier by the fact the show is hosted by four men that Izzo counts as friends: Rece Davis, Jay Bilas, Seth Greenberg and Jay Williams.

“Forgiving and forgetting and dealing with things is part of life,” Izzo said, “and there will be a lot of people that feel differently both ways and I gave you how if feel. That is strictly how I feel.

“I’m telling you this, I think it’s our opportunity to show the world that there were mistakes made, there were a lot of people that paid a high price for those mistakes. Doesn’t make everything perfect but it does mean we’re trying to move forward and heal and show people that this is an incredible place.”