'A little off': Michigan State jolted by Indiana in OT

The Spartans lose back-to-back games for the first time since the 2017 regular season.

'A little off': Michigan State jolted by Indiana in OT

East Lansing — Michigan State lost its second consecutive game on Saturday, something it hadn’t done since the final two regular-season games in 2017.

And Tom Izzo almost knew it was coming.

He might not have known his team was going to go 8-for-22 from the free-throw line or give up 20 offensive rebounds while allowing Indiana — the Big Ten’s worst 3-point shooting team — to nail 10 of its 20 attempts. But he did sense the lackluster effort was coming, one that led to Indiana’s 79-75 overtime victory at the Breslin Center.

“I didn’t do a very good job of getting my team to play and I knew it the way we practiced this week,” Izzo said. “That should fall on me, not them. I feel bad because in my mind I know when we lost the game. It wasn’t in the game and that’s what the players have to learn and realize you are everybody’s big game.

Indiana (13-9, 4-7 Big Ten) took advantage, ending a seven-game skid and winning at the Breslin Center for the second time in the last 23 trips. Seven of their 3-pointers came in the second half, including one in overtime that gave the Hoosiers the lead for good.

Romeo Langford was the star for the Hoosiers, scoring 19 as five players reached double figures. Aljami Durham scored 14, Justin Smith had 13, De’Ron Davis chipped in 12 and Devonte Green scored 11 for a team that was coming off a one-sided loss at Rutgers earlier in the week.

“Without question, we looked like a different team,” Indiana coach Archie Miller said.

Michigan State looked like a different team, too. Playing for the first time since its 13-game win streak ended on Sunday at Purdue, the Spartans were beaten on the glass, 48-40, and allowed Indiana to score 16 second-chance points.

Cassius Winston scored 26 points and had eight assists for the Spartans (18-4, 9-2) while Xavier Tillman scored 13, Kenny Goins had 12 points and Nick Ward scored 11 but went 1-for-9 from the free-throw line.

But as poorly as they played on Saturday, the Spartans, like their coach, knew things weren’t lining up right.

“You could just feel something was a little off, from the coaches all the way down,” Tillman said. “You try and pick it up but sometimes you could feel it. I don’t know if we were still hanging on to the Purdue game, but you could feel it in the air, there was like a little shadow over us. We had our energy when we were out there, but it was kind of quiet.”

Added Goins, “It wasn’t really that hard to tell. It kind of seemed like we let the long week off kinda get to us. Just kind of expected because we were practicing four days in a row we could kind of coast into it. Something wasn’t there.”

It wasn’t there in first half and by the time the second half was underway, Michigan State couldn’t pull away, leading by five after a Winston layup put the Spartans ahead, 38-33. But the Hoosiers continued to hang around, pulling to within two then scoring six straight to regain the lead, 44-42, on a 3-pointer from Durham.

Michigan State responded by scoring the next seven points to go up, 49-44, but a couple of tough calls and missed free throws allowed Indiana to pull within 52-50 after a pair of free throws from Langford with 7:55 to play.

The Hoosiers then started heating up from deep, connecting on 3-pointers on the next four possessions, taking a 62-60 lead with 4:13 to play. The Hoosiers eventually pushed the lead to 64-61 before a free throw from Tillman and the Goins 3-pointer put Michigan State up one with less than a minute left.

Langford answered with a running layup past Aaron Henry with 30.3 seconds to play to put the Hoosiers up a point, 66-65. Ward then drew a foul with 18.3 seconds to play and he split the pair to tie the game at 66 and Langford’s last-second heave was off the mark, sending the game to overtime.

Michigan State took the early lead in overtime, but a 3-pointer from Langford off a loose ball put the Hoosiers up one before the lead was extended by a pair of Durham free throws ahead of two Winston free throws. But a put-back from Smith had Indiana back up by three with two minutes to play. 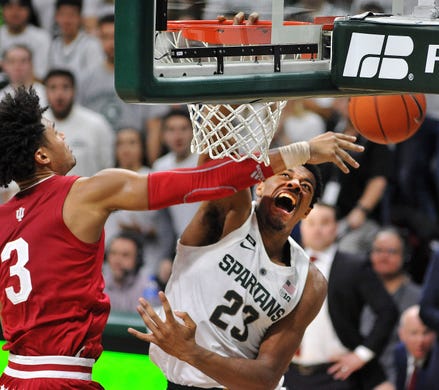 Michigan State's Xavier Tillman gets fouled on his way to the basket by Indiana's Justin Smith (3) in the first half as MSU falls to Indiana, 75-79, in overtime Saturday night, Feb 2, 2019 at Breslin Center in East Lansing. Dale G. Young, Detroit News
Fullscreen 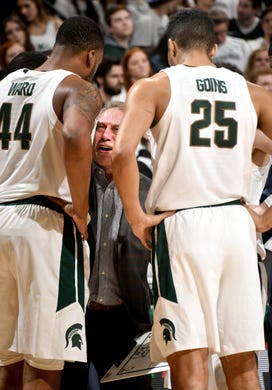 Michigan State coach Tom Izzo gets after his big men Nick Ward and Kenny Goins in the huddle in the second half. Dale G. Young, Detroit News
Fullscreen 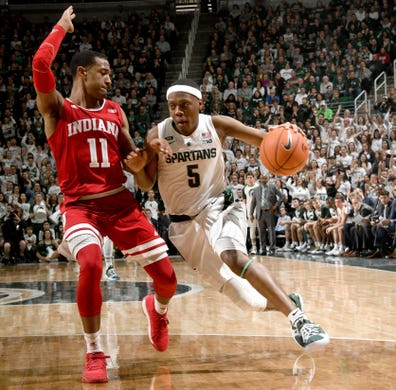 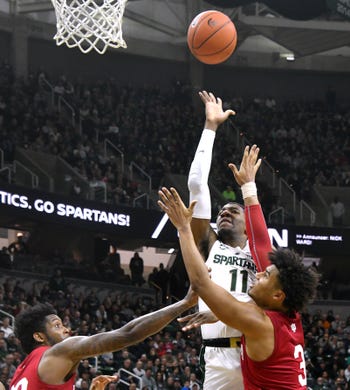 Michigan State's Cassius Winston makes a lob pass to a teammate waiting on the baseline over Indiana's Rob Pinisee (10) in the second half. Dale G. Young, Detroit News
Fullscreen

Michigan State's Nick Ward makes a rare basket over Indiana's Jake Forreaster in the second half. Ward only scored 11 points for the night, and went 1-for-9 at the charity stripe. Dale G. Young, Detroit News
Fullscreen 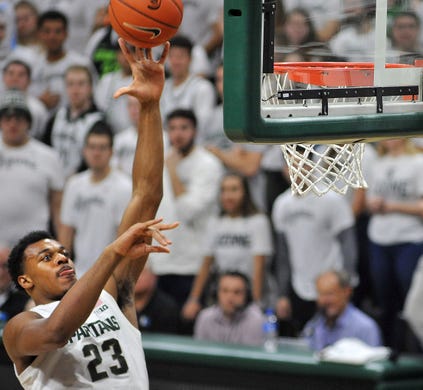 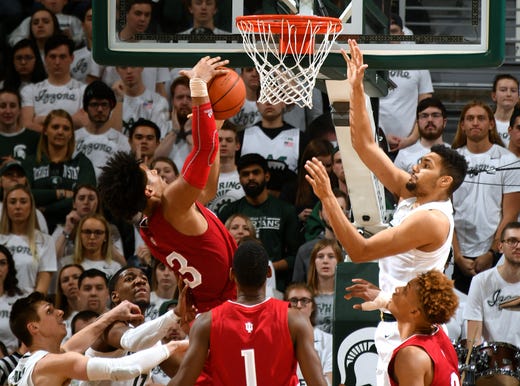 Michigan State's Xavier Tillman slams the ball through the hoop and Indiana's  De'Ron Davis is too far out of position to stop it. Dale G. Young, Detroit News
Fullscreen 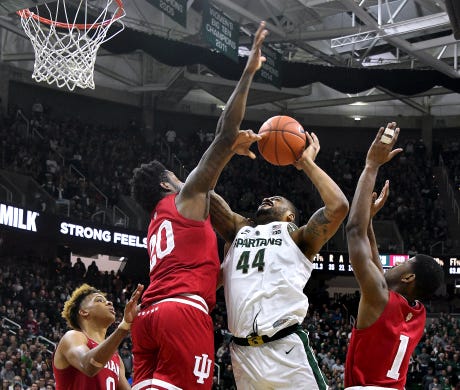 MSU's Nick Ward gets triple-teamed under the basket at the end of the game in regulation and gets a trip to the free throw line. Dale G. Young, Detroit News
Fullscreen 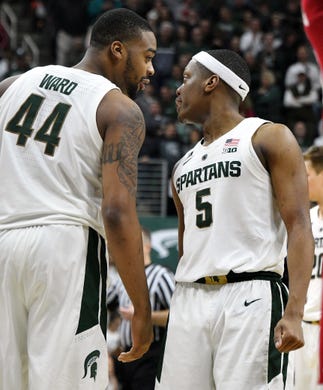 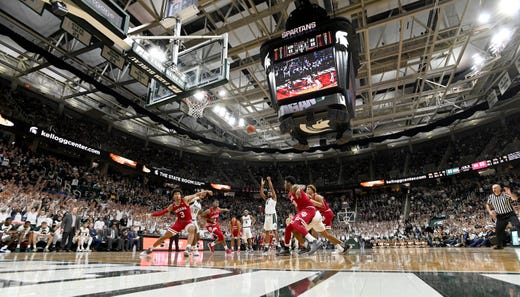 Nick Ward misses the first of two free throws that might have won the game for the Spartans in regulation, as MSU falls to Indiana, 75-79 in overtime Saturday night, Feb 2, 2019 at Breslin Center in East Lansing. Ward went 1-9 at the free throw line. Dale G. Young, Detroit News
Fullscreen
Nick Ward misses a free throw at the end of the second half. Dale G. Young, Detroit News
Fullscreen 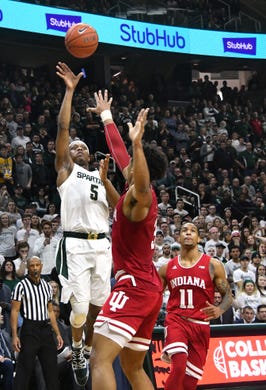 Cassius Winston misses a chance to pull the Spartans into a tie in overtime with this shot. Dale G. Young, Detroit News
Fullscreen 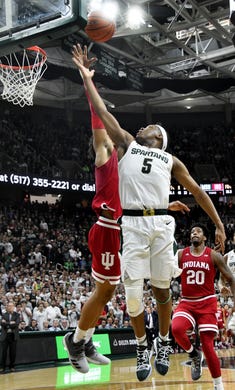 Cassius Winston got a second chance in overtime and missed this shot too. Dale G. Young, Detroit News
Fullscreen 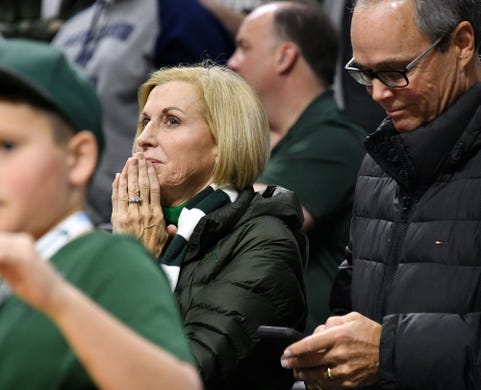 An anxious fan strikes a pensive pose in the stands as MSU begins to run out of time. Dale G. Young, Detroit News
Fullscreen

The Spartans got within one on a Winston three with 30 seconds to play then forced a turnover. But Winston’s jumper misfired, and after Indiana split a pair of free throws, his drive to the hoop didn’t connect as the Hoosiers hung on for the upset.

Michigan State falls back into a first-place tie in the Big Ten with Michigan and heads to Illinois on Tuesday.

“We’ve got to get back in the gym, jump back on the horse and grind it out,” Goins said. “Fix the mistakes we see on film and hopefully unleash a little anger on Illinois on Tuesday.”