Junior center, who was hurt late in the first half, will likely miss both rivalry games against Michigan.

MSU's Nick Ward talks about his injured hand, which required surgery and will keep him out at least for a few weeks. The Detroit News 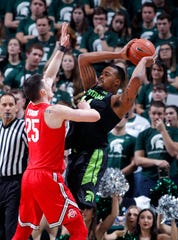 The Michigan State junior sat next to the court Monday at the Breslin Center, his left arm in a sling after he had surgery Sunday night to repair a hairline fracture in his shooting hand. It will keep him out for at least the next couple weeks, a critical blow for the Spartans, who are in the thick of the Big Ten title race and playing toward a high seed in the NCAA Tournament.

“I’m in a good place,” Ward said after Michigan State wrapped up practice. “This is God’s plan for my life and I’ll be just fine.”

It might be the plan for Ward, but it’s hardly anything he or the Spartans were counting on as they get set to host Rutgers Wednesday before traveling to Michigan on Sunday for a first-place showdown.

However, it’s exactly where Ward and No. 10 Michigan State sit as Ward is now following the lead of teammate Joshua Langford, who is out for the season after having surgery on his injured foot.

“We both have positive mindsets and that’s how you gotta stay throughout this whole process,” Ward said. “So, I’m just ready to come back.

Coming back is something both Ward and the Spartans are hoping for at some point this season. Trying to determine when that might be is tougher to predict.

Ward said he wasn’t given on real timetable and coach Tom Izzo said he’s talked to folks who have taken anywhere from three to five weeks to get back.

Kirk Cleland, a physician from St. Clair Orthopedics and Sports Medicine who works out of Beaumont, St. John’s and Henry Ford and specializes in hand and elbow orthopedic surgery, says there are variables when it comes to returning from the type of injury Ward has.

“A lot of it would depend on what particular bone was broken,” Cleland said. “I didn’t see the play and don’t know the injury, but one of the more common places you see a fracture is in the metacarpal bones. Assuming it was a metacarpal, he could get back as quickly as three to four weeks.”

Cleland said having surgery speeds up the rehab.

“It allows you to be aggressive with rehab and potentially returning to sports (faster),” Cleland said. “(Recovery) may be a little longer if not treated surgically. That’s one of the advantages of fixing the injury with surgery. With it being stabilized, the rehab can be aggressive especially when there’s access to athletic training facilities.

Cleland said that even before Ward is cleared for full activity and the hand is completely healed he will be able to keep his legs in shape and dribble with the other hand while obviously taking part in noncontact drills.

Ward joked on Monday that he could “come back with a six pack” after all the conditioning work he’ll put in over the next couple of weeks. He also didn’t rule out wearing some sort of protective cast if it allows him to return sooner.

How and when Ward suffered the injury is still a bit of a mystery, even to Ward. He played nearly 16 minutes in the first half of Michigan State’s victory over Ohio State but spent the bulk of halftime getting treatment on his shooting hand. He did not start the second half but checked in twice, lasting only a total of 3:30.

“It was the end of the first half,” Ward said. “It was a number of things. I cut my hand on the rim and that didn’t help. And I hit it on somebody’s elbow, and that’s when I hurt it.

Izzo was just as unsure of the timing of Ward’s injury, but it was clear at halftime there was a problem.

Michigan State coach Tom Izzo talks about the injury to Nick Ward, and where the Spartans go from here. The Detroit News

“It was sometime in the last two minutes of the half,” Izzo said. “He came out then went back in. You look at it on film and there was a foul in there, but it was nothing that … so I have no idea. All I know is that when I went in there and Nick (Richey), our trainer, said to me, ‘Nick’s hand is bothering him.’ I didn’t think nothing of it. Then we get in there and they bring him back in the room and then he didn’t come out until after and that’s where it was.”

Ward is averaging 15.3 points and seven rebounds a game for the Spartans. But as big of a blow as it appears to be, Ward is doing his best to not let it get him down while focusing on his potential return.

“(I was) disappointed but I’ll be fine,” he said of when he was told of the fracture. “I’m a quick healer so I’ll be back.”