The junior point guard brushed off a slow start and some aching knees to score 23 points and hand out seven assists as No. 9 Michigan State knocked off No. 7 Michigan.

MSU's Cassius Winston and Xavier Tillman talk about the win over Michigan. The Detroit News 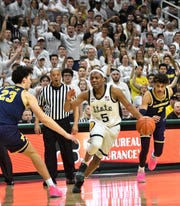 East Lansing — It seemed like Cassius Winston locked up Big Ten MVP honors two weeks ago, but if there was any lingering doubt, he likely dashed it on Saturday night.

The junior point guard brushed off a slow start and some aching knees to score 23 points and hand out seven assists as No. 9 Michigan State knocked off No. 7 Michigan, 75-63, at Breslin Center to win a share of the Big Ten championship with Purdue.

It is the second straight league title for the Spartans (25-6, 16-4 Big Ten) and it likely wouldn’t have been possible if not for the play of Winston. He’s a five-time player of the week in the conference and is among the finalists for most of the national player of the year awards.

And with Michigan in control on Saturday, it was Winston who turned in another award-winning game, sparking a huge 25-4 run in second half to turn an eight-point deficit into a 13-point lead.

More: Wojo: Spartans are about Cassius Winston and so much more

“Cash had that first turnover of the game, layup,” Michigan State coach Tom Izzo said, reflecting on the first possession of the game. “But boy, like the reason he is, to me, the most valuable player in this league, is because when it was winning time, he made some winning plays. That's what great players do. He did it, and I'm really proud of him.”

Winston has been battling tendinitis in his knees for the last couple of weeks and they were a factor in Tuesday’s game against Nebraska when Winston scored just eight points.

But Winston and Izzo both agreed there was no issue on Saturday.

“Yeah, I’m good,” Winston said. “I was cool. There was a whole bunch of adrenaline and it was a must-win game, so I had to get it done.”

Winston got it done, all right, and has now scored 50 points and handed out 15 assists in the two games against Michigan after struggling mightily in two meetings last season.

“I think that (his teammates) have such an appreciation for his ability to find people and get the ball to people, along with being a great scorer,” Izzo said. “It's hard to do that taking as few of shots as he does and averaging 20 points. He's got to be one of the more efficient players I've had.”

The Big Ten will reveal its postseason awards on Monday, and odds are Winston will be named the conference’s top player, though Purdue’s Carsen Edwards and Wisconsin’s Ethan Happ will likely draw a few votes.

“(It would be) a huge honor,” Winston said of the possibility. “I never saw myself being in that situation coming into this year. To have that put in front of me and to do everything I could to go grab it, seize that opportunity. If I get that honor, that would be huge.”

Junior center Nick Ward missed his fifth straight game with a broken hand, but there was a moment at halftime when Izzo thought about letting Ward suit up. They even put his name in the official scorer’s book in case of an emergency.

Izzo said Ward, who has been wearing a brace on the left hand but has been doing shooting drills for nearly two weeks, should be back by Friday when Michigan State opens the Big Ten tournament.

Junior Kyle Ahrens was back in the lineup after missing Tuesday’s game with a back injury. Ahrens played nearly 15 minutes and had four points and four rebounds.

Late in the first half, Ahrens scored on a layup in transition and hit the floor hard. He was grimacing as he ran down the court but was soon firing up his teammates during the next timeout.

“You could see the pain, couldn't you?” Izzo said. “They were so fired up for him in the next huddle. You talk about a guy with some grit, now. I mean that guy, we couldn't even practice him. It was almost decided that we wouldn't play him. I just felt like I needed a guy who's a threat to shoot and could do some things.”

Michigan State captured its 15th regular-season Big Ten championship. That's the second most in the conference since Michigan State joined the Big Ten in 1950-51, trailing only Indiana (19).

… Since Izzo's first season in 1995-96, no other school has won more than five Big Ten titles.

… Winston handed out seven assists, his 27th game this season with at least six assists.

… Kenny Goins had 16 rebounds, his 14th game with at least 10 rebounds and his 21st time this season leading the team in rebounds.