Michigan State and Wisconsin square off in the Big Ten tournament semifinals on Saturday at 1 p.m. 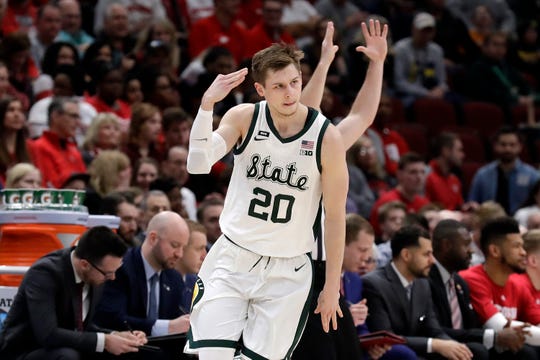 Michigan State's Matt McQuaid reacts after shooting a 3-point basket in the first half of the game against Wisconsin. (Photo: Nam Y. Huh, Associated Press)

Michigan State got off to a hot start in Saturday's Big Ten tournament semi-final and never looked back, opening the game with a 14-point lead six minutes into the game before eventually advancing to a 67-55 win over Wisconsin at the United Center in Chicago.

The Spartans were 9-for-21 from beyond the arc, compared to Wisconsin's 11-percent clip.

Michigan State closes out the Badgers

Kobe King draws a foul and makes one of two. Ethan Happ makes a layup after Wisconsin pulls down an offensive rebound on King's missed free throw.

Xavier Tillman is fouled at the other end and makes both; Khalil Iverson gets the two points back with a layup on Wisconsin's next possession.

Cassius Winston is awarded two free throws and makes them both, and after Wisconsin misses a jumper, sends Tillman back to the line.

Ethan Happ commits a foul on Nick Ward while reaching for a rebound. Another timeout.

Wisconsin continues its poor stretch from the field. It has not scored in 5:47 and has missed its last nine field goals and counting.

Coming back from a break in the action, Winston misses a 3-point shot, but the Spartans draw a foul on the rebound and will get the ball back — more time to bleed the clock. D'Mitrik Trice draws his second foul in a few seconds after being backed down by Nick Ward.

Winston pulls up from the elbow and catches nothing but the bottom of the net, making it 56-44, Michigan State. Wisconsin breaks its 7:10 scoring drought on the other end with a Trice Jumper.

Matt McQuaid draws a foul on Brad Davidson while chasing a ball out of bounds; McQuaid tumbled into the a camera man, and appeared to be in a lot of pain. He ends up taking his free throws, though, making both.

McQuaid steals a pass on the other end and Xavier Tillman converts a layup shortly after. Then Ethan Happ scores and Wisconsin calls timeout.

Khalil Iverson hits the free throw to make it a 6-point game.

Cassius WInston makes it 8 in a hurry with a fast-break layup and Iverson drills a jumper on the other end.

Kenny Goins finds his stroke with his first 3-pointer of the half, making it 52-43. Matt McQuaid commits an offensive foul, but Nate Reuvers misses the front end of a 1-and-1.

Wisconsin hanging around despite poor shooting

Cassius Winston picks up his sixth assist of the game with a dish to Xavier Tillman, who scores Michigan State's first basket in over 3:30. Ethan Happ backs down Tillman inside on the other end and lays in the bucket, drawing a foul. Happ misses the free throw.

Tillman catches a pass inside from Kenny Goins, and this time he doesn't miss the easy dunk. Michigan State leads, 43-34.

Winston extends the Spartan lead back to double digits with a long jumper that's good for 2.

Nick Ward picks up an offensive foul on Michigan State's next possession, his fourth, and will check out for Thomas Kithier.

Brad Davidson misses a 3-pointer; Wisconsin has now missed its last six field goals. Happ snaps the cold streak with a layup and Winston immediately puts in a layup for Michigan State on the other end.

Happ brings the Michigan State lead back down to double digits with a nifty move in the paint that leads to a layup. Matt McQuaid turns it over and Wisconsin goes the other way with it; Khalil Iverson scores on a layup and draws a foul in the process.

Wisconsin creeping back into game behind defensive effort

Michigan State starts the second half as it did the first: With a 3-pointer. Aaron Henry hits from long range and the Spartans have a 38-27 lead. Ethan Happ scores Wisconsin's first points of the half a few possessions later with a drive and layup.

The Spartans move up the floor in a hurry after grabbing a defensive board and Kenny Goins draws a shooting foul. He makes one of two. Goins then blocks Happ at the rim on the other end.

Nick Ward picks up his third foul of the game, and on the same possession, Brad Davidson draws an and-1 foul at the rim. He makes the free throw and Michigan State leads, 39-32.

Kobe King makes a layup out of the break for Wisconsin. Cassius Winston, who appeared to have aggravated a toe injury moments ago, hits a 3-pointer to signal that he'll be alright.

D'Mitrik Trice nails a jumper to cut Michigan State's lead to 32-22. A few possessions later, it's now an 8-point game after an Ethan Happ layup.

Matt McQuaid drills a 3-pointer to extend the Spartans' lead to 11, but Trice returns the favor with a triple of his own to make it 35-27 with 16 seconds left in the half.

Winston is fouled beyond the arc. Michigan State runs a picture perfect out-of-bounds play and gets the ball to Xavier Tillman, who throws down a dunk with authority — but it rattles around the rim and out.

Xavier Tillman's and-1 free throw is good. Ethan Happ  breaks Wisconsin's scoreless drought with a layup, the Badgers' first field goal in over 4:30. It's 27-12.

A few possessions later, Happ scores with a hook shot in the paint. Khalil Iverson hits one of two free throws for Wisconsin moments later.

Cassius Winston breaks up the Wisconsin run with a jumper in the paint, but Kobe King comes right back for Wisconsin with the Badgers' first made 3-pointer of the game.

Michigan State throws the ball around before getting it into the hands of Aaron Henry, who hits a corner 3.

Wisconsin clanks another jumper off the rim; the Spartans hold the ball for nearly a minute, benefitting from an offensive rebound, before getting whistled for an offensive foul.

Each team commits a turnover on their next possessions. Wisconsin has not scored in 3:39 and counting.

Xavier Tillman draws a foul and will shot two. He misses the first and makes the second. Wisconsin misses another 3-pointer on the other end.

Tillman will go back to the line, this time after converting a layup.

Wisconsin finds groove with inside play

After the stoppage in play, Kenny Goins comes out firing again. He nails his third 3-pointer of the game, and Michigan State has an 18-4 lead.

Charles Thomas IV and Kobe King each hit a pair of layups for Wisconsin, with a jumper from Michigan State's Nick Ward in between. It's 20-8.

King makes a nice move on Aaron Henry and puts up a layup after Ward turns it over.

Michigan State wins the jump ball and we are underway. Cassius Winston dishes to Kenny Goins, who drills from 3 on the Spartans' first possession.

On the next possession Winston kicks it to Matt McQuaid, who makes it 6-0 with a 3-ball. Winston then pulls up for a deep 2-pointer and makes it 8-0 as the Badgers remain scoreless.

Ethan Happ gets Wisconsin on the board with a layup. Happ then gets a steal, but Wisconsin can't capitalize, and Goins hits another 3-pointer at the other end. Spartans lead, 11-2.

Brad Davison pulls up for a jumper that catches nothing but net. Michigan State pushes the floor and Winston lays a basket up and in.

After another missed jumper by the Badgers, Winston dances through a handful of Badger defenders and gets to the rim for another layup.

Michigan State and Wisconsin square off in the Big Ten tournament semifinals on Saturday at 1 p.m. Michigan State, the Big Ten regular-season champion, could make a solid case for a No. 1 seed in the NCAA Tournament with a conference tournament title added to its resume.

Follow the action here with live updates throughout the game by Nolan Bianchi of The Detroit News.