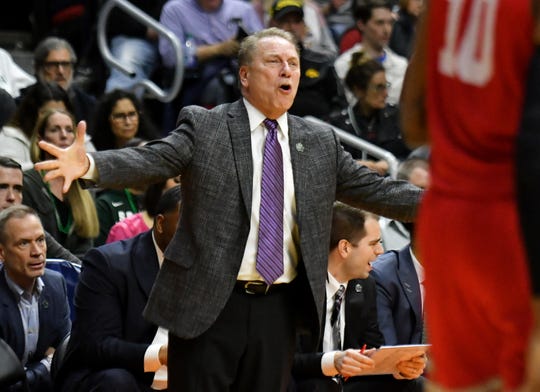 Barkley, the former NBA star and Hall of Famer, defended Izzo on Friday during the CBS pregame studio show.

Izzo drew heavy criticism for his approach with Michigan State freshman Aaron Henry during the Spartans’ victory over Bradley on Thursday in the first round of the NCAA Tournament.

“One of the reasons Tom Izzo is one of my favorite coaches (is) he coaches his team,” Barkley said. “And I was so disappointed to hear all these jackasses on other networks complaining about a coach actually coaching his team. Coach Izzo, you keep doing your thing. It’s all right for a coach to yell at a player. When did we get to the point where every time a coach yells at a player it becomes a national emergency. So shout out to Coach Izzo. Keep doing your thing.”

Former players echoed what Barkley was getting at, taking to social media on Thursday night and Friday morning to defend Izzo.

Both Jaren Jackson Jr. and Miles Bridges, NBA Lottery picks who part of last season’s team that won the Big Ten before getting upset in the second round of the NCAA Tournament backed up their former coach while Kelvin Torbert, who played from 2002-05 and was a two-time captain said, “I go to war with him any day.”

And former Izzo assistant Tom Crean, now the head coach at Georgia, said, “I he’d tell and yell at me again. It always made me better.”

So coaches cant yell at players now? Lol Izz cares about his players more than half these other college coaches. 600+ wins for a reason. #GoGreen

Love pushes you and hugs you. Tom Izzo makes everyone around him accountable and responsible. I’ve been gone 20 years from his staff and there is many a day I wish he’d tell and yell at me again. It always made me better.

I like how so many people have something to say about Izzo coaching. Except all the people and players that’s been in that locker room or in a battle with him. 🗣 give me all that. I go to war with him any day

Bob Wojnowski and Matt Charboneau break down MSU's win over Bradley in the NCAA Tournament. The Detroit News