Michigan State vs. Duke: Who has the edge, plus Matt Charboneau's prediction

Michigan State vs. Duke: Who has the edge, plus Matt Charboneau's prediction

Bob Wojnowski and Matt Charboneau break down MSU's win over LSU in the NCAA Tournament while looking ahead to the matchup with Duke. The Detroit News

The Blue Devils don’t have what would be described as a traditional backcourt, as only point guard Tre Jones would be classified as a guard. But Jones has had an outstanding freshman season running the offense for the Blue Devils and is picking things up when it matters most. He scored 44 in three ACC tournament games, including a then career-high 18 in the championship game victory over Florida State while shooting 8-for-14 and handing out six assists. He wasn’t quite as productive in the first two NCAA Tournament games, but Jones was the catalyst in Duke’s Sweet 16 win over Virginia Tech. A 23-percent 3-point shooter, Jones was 5-for-7 from long range and finished with 22. He’s also a tenacious defender and will surely make things difficult for Michigan State’s Cassius Winston.

Winston was typical Winston in the win over LSU in the Sweet 16, scoring 17 and dishing out eight assists. He was bothered by LSU’s Tremont Waters at times but used his sense of the game to find open spaces and take advantage of the aggressive Tigers defense. Matt McQuaid got in foul trouble against LSU and didn’t score until late, but his six straight points inside two minutes, coupled with his defense, proved his value once again. The big story in Michigan State’s backcourt has been freshman Aaron Henry. He was all over the floor against LSU and scored a career-high 20 points. He’ll be challenged in this game on both ends but will be critical defensively as he could see time on Zion Williamson, RJ Barrett or Cam Reddish, if Reddish plays.

More: Wojo: Merciless Spartans show they can take on anything — even Duke 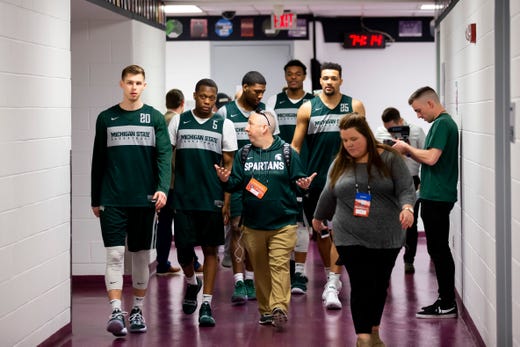 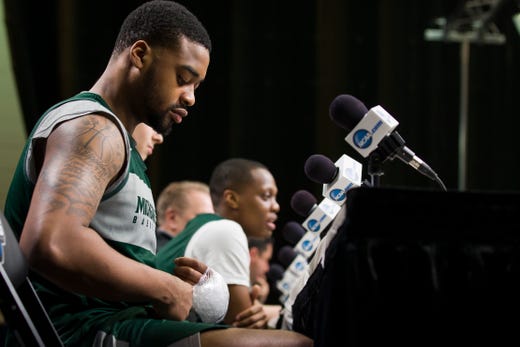 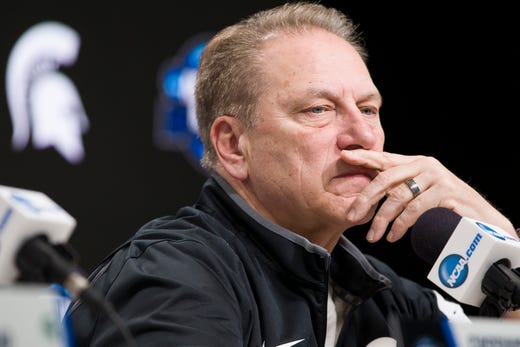 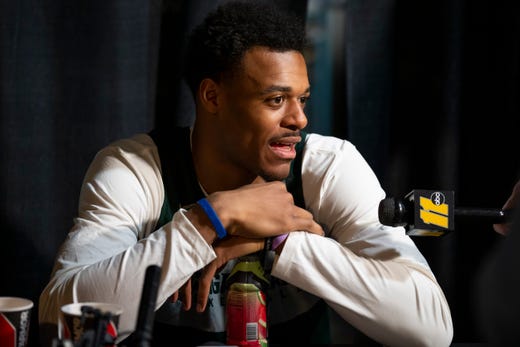 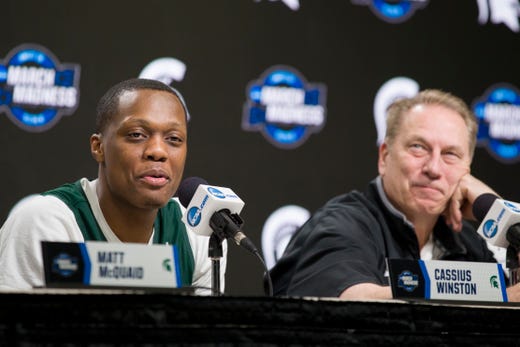 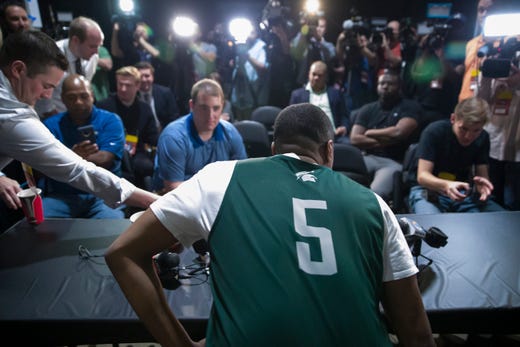 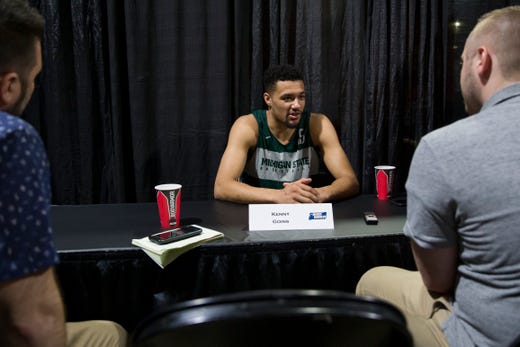 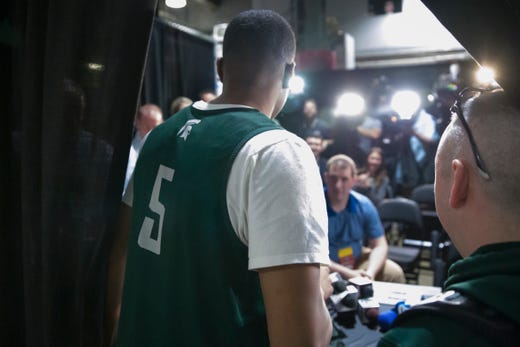 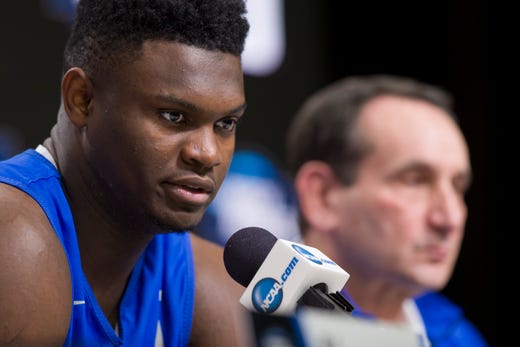 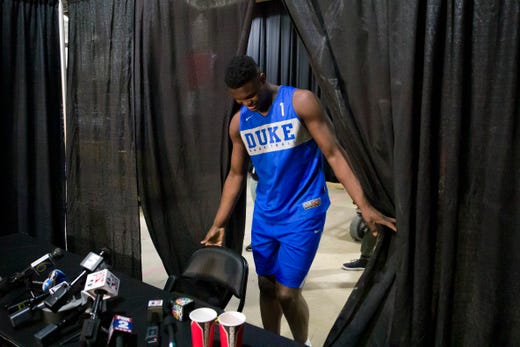 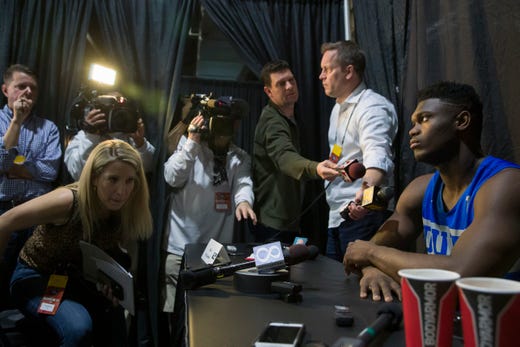 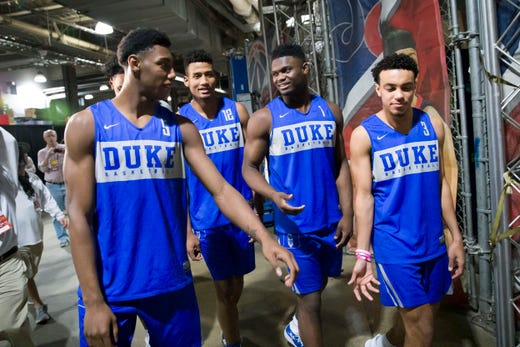 It’s impossible to avoid. The Blue Devils are loaded up front, even if Reddish is unable to play. The 6-8 freshman sat out the Virginia Tech game because of a sore knee and his status for Sunday is unclear. Even if Reddish is out, Duke has the luxury of two more likely NBA lottery picks in Williamson and Barrett. The 6-7, 285-pound Williamson has been a beast all season. He scored 32 last week in the win over UCF and had 23 against Virginia Tech. He’s a matchup problem for every team Duke has faced and will be again when facing the Spartans. Barrett has been nearly as unstoppable. He had 18 points and 11 assists in the Virginia Tech game and his offensive rebound and putback was the difference in the UCF victory. If Reddish is out, expect junior Javin DeLaurier to start. At 6-10, he takes up space and can be a rim protector on defense.

It likely will be a long night for Michigan State’s Xavier Tillman and Kenny Goins. They’re not overmatched in the size category, but the athleticism is something that will test the Michigan State big men. Both have been consistent offensively, though Goins has continued to be a little more uncertain from 3-point range, even after hitting two in the second half Friday. The key for the duo is how they match up with the Blue Devils. Tillman probably will get the first crack at Williamson, though expect Goins to have some time there, too, in addition to Aaron Henry. They’ll also need a rebounding performance like the one against LSU as Duke is averaging better than 13 offensive rebounds a game.

FacebookTwitterGoogle+LinkedIn
Tom Izzo vs. Coach K: The agony of (many) defeats
Fullscreen

Coaching legends Mike Krzyzewski and Tom Izzo will meet for the 13th time Sunday, in the Elite Eight. Coach K is 11-1 all-time against Izzo. Matt Charboneau of The News takes a look back at the previous 12 meetings. Darron Cummings, Associated Press
Fullscreen 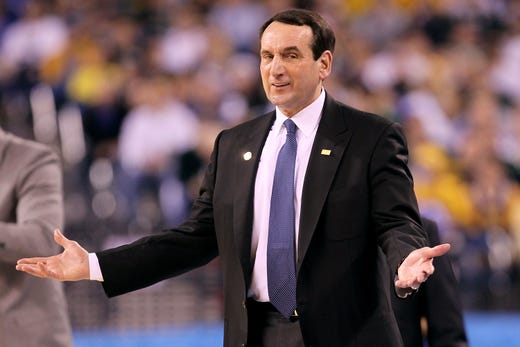 Dec. 2, 1998: Duke 74, Michigan State 67 -- In the old Great Eight that was still played at the Palace of Auburn Hills, a top-10 matchup featured a Duke team loaded with NBA talent and an MSU team with a bunch of scrappers from Flint, a young group led by Mateen Cleaves, Morris Peterson, Charlie Bell and Antonio Smith. The Blue Devils got the better of MSU that day in what proved to be the first of two meetings that season. Andy Lyons, Getty Images
Fullscreen 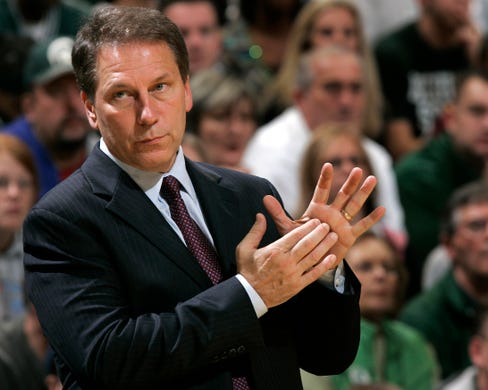 March 27, 1999: Duke 68, Michigan State 62 -- This was Izzo’s first moment on the game’s biggest stage, his first appearance in the Final Four. The Spartans were still the up-and-comer and Duke simply had too many weapons as the Blue Devils advanced to the national title game. But Michigan State would win the national championship the next year, part of three straight trips to the Final Four. Dale G. Young, Detroit News
Fullscreen 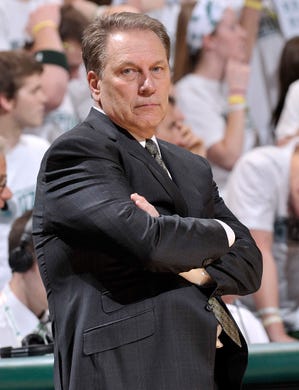 Dec. 3, 2003: Duke 72, Michigan State 50 -- This is probably the game in the series most would like to forget. It was another top-10 matchup and still the only time Duke has played at Michigan State. The Spartans were humbled in a big way as the Blue Devils hammered the Spartans, a team that played a brutal non-conference schedule and never recovered, bowing out in the first round of the NCAA Tournament that season. Dale G. Young, Detroit News
Fullscreen 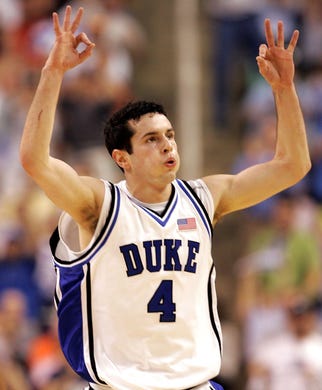 Nov. 30, 2004: Duke 81, Michigan State 74 -- This was Michigan State’s first trip to Cameron Indoor Stadium in what proved to be the first of two meetings that season. The Blue Devils, behind J.J. Redick and Daniel Ewing, who each scored 29 points, were again too much for the Spartans, who got 17 points from Paul Davis. It was all preview to March, however. Streeter Lecka, Getty Images
Fullscreen

March 25, 2005: Michigan State 78, Duke 68 -- It was the first game of what proved to be a magical weekend for the Spartans. They earned Izzo’s only victory over Krzyzewski in the Sweet 16 with 20 points from Paul Davis and 17 from Alan Anderson then followed that up two days later with a double-overtime thriller over Kentucky to reach the fourth Final Four under Izzo. Dale G. Young, Detroit News
Fullscreen 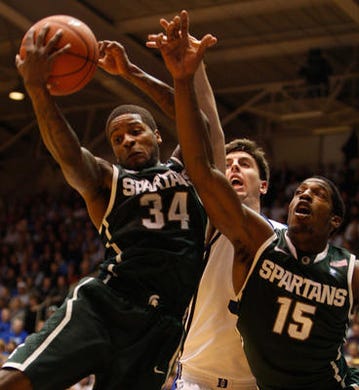 Dec. 1, 2010: Duke 84, Michigan 79 -- In the midst of another tough non-conference stretch, the Spartans headed back to Cameron for an ACC/Big Ten Challenge game. They turned the ball over 20 times and allowed Kyrie Irving to score 31 but still were in the game in the final minutes. The season crumbled from there with a fourth-place finish in the Big Ten and a first-round exit in the NCAA Tournament. Detroit News
Fullscreen

Nov. 15, 2011: Duke 74, Michigan State 69 -- It was in the first edition of the Champions Classic and the victory gave Krzyzewski his 903rd win, moving him past Bob Knight as the winningest coach in Division I history. It was a tough start to the year as the Spartans had just lost to North Carolina on an aircraft carrier in San Diego, but by the end of the season they were Big Ten champions and No. 1 seed in the NCAA Tournament. Kathy Willens, Associated Press
Fullscreen 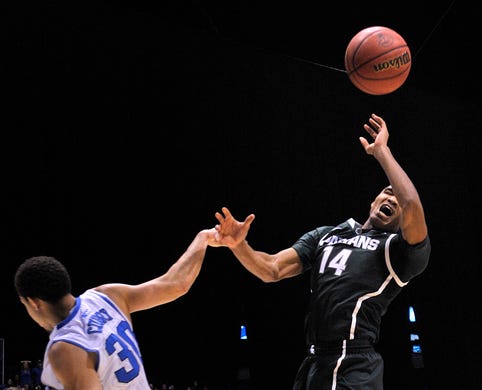 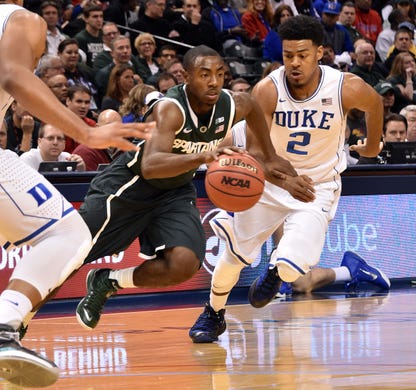 Nov. 18, 2014: Duke 81, Michigan State 71 -- Another Champions Classic, this time in Indianapolis. Duke was loaded again and featured Jahlil Okafor and Tyus Jones, two players Izzo recruited heavily. They, along with Justise Winslow, scored in double-figures and were too much for an MSU team that was still finding its way. It proved to be the first of two matchups that season. Dale G. Young, Detroit News
Fullscreen 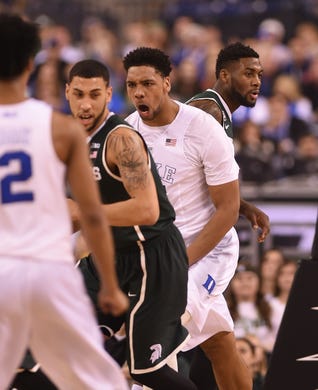 April 4, 2015: Duke 81, Michigan State 61 -- The teams met in Indianapolis again, this time at Lucas Oil Stadium in the Final Four. It didn’t go nearly as well for the Spartans who jumped out to a quick lead before the Blue Devils overwhelmed them. Duke went on to win the national championship two nights later and Michigan State had first-weekend exits the next three years. Daniel Mears, Detroit News
Fullscreen 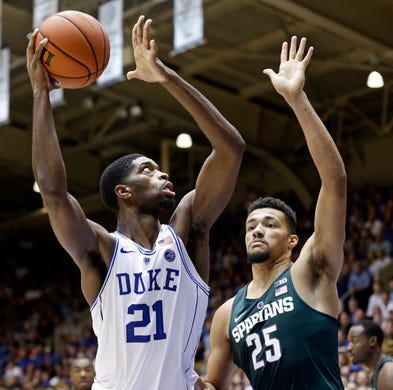 Nov. 29, 2016: Duke 78, Michigan State 69 -- Michigan State was back at Cameron for another ACC/Big Ten Challenge game, the first chance for Miles Bridges and a highly regarded freshman class to play at Duke. The Spartans struggled, including Bridges, who scored 11 points. Grayson Allen went for 24 and Michigan State had no answers. Gerry Broome, Associated Press
Fullscreen 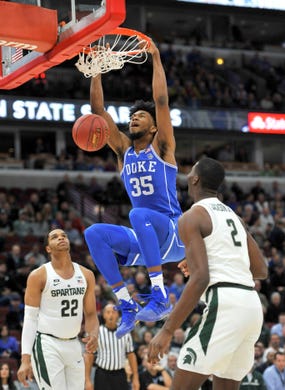 Nov. 14, 2017: Duke 88, Michigan State 81 -- Back at the Champions Classic, this one had plenty of hype as the Blue Devils were ranked No. 1 and the Spartans were No. 2. It was everything it was cracked up to be as each team played at a high level. But once again, Grayson Allen proved the difference by scoring a career-high 37 to disappoint Michigan State once again. Paul Beaty, Associated Press
Fullscreen

Neither team is terribly deep, but injuries have forced both to start looking for other options. Duke might not have Reddish and are likely to miss forward Jack White, who has missed the last three games with a hamstring injury. The Blue Devils have gotten 6-11 Marques Bolden back. He played sparingly in the last two games after coming back from a knee injury and played almost 20 minutes against Virginia Tech. He has starting experience and takes up plenty of space in the middle, collecting a pair of blocks Friday. If Reddish is out, expect sophomore Alex O’Connell to get a second straight start. He played 35 minutes against Virginia Tech and can hit 3-pointers, even though he was 0-for-4 on Friday.

Michigan State got a scare Friday when 6-9 center Nick Ward banged his surgically repaired left hand on the ground in the second half. But X-rays were negative, and Ward said he expects to play. He could be a key matchup in defending the post and keeping the Blue Devils off the glass. Freshman Gabe Brown was the other key off the bench for the Spartans as he had a career-high 15 points against LSU along with making a career-best four 3-pointers. There could be spot minutes for guard Foster Loyer or forward Thomas Kithier, but don’t expect too much from either.

This is the matchup that everyone was expecting when the brackets were drawn and as the NCAA Tournament has progressed, Duke has gone from invincible to vulnerable. The Blue Devils aren’t a great shooting team and the Spartans have one of the best two-point defense in the nation. If Michigan State continues to shoot the ball the way they have all season, it could have what it takes to beat Duke for the first time since the 2005 Sweet 16, Tom Izzo’s only victory over Mike Krzyzewski.