As Michigan State and Duke gets set to square off for a spot in the Final Four, both teams have some questions as to the status of key players in the rotation.

Washington — As Michigan State and Duke gets set to square off for a spot in the Final Four, both teams have some questions as to the status of key players in the rotation. 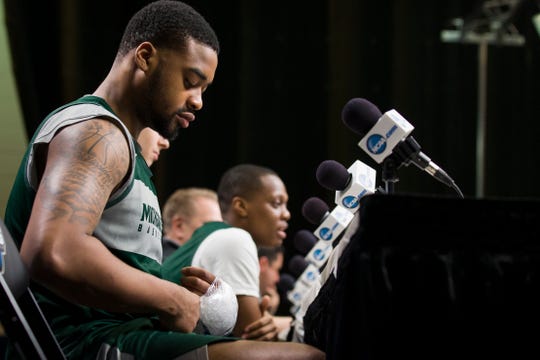 The 6-foot-9 junior slammed his surgically repaired left hand on the floor against LSU on Friday night while battling for a rebound. He left the game and X-Rays were negative.

More: Michigan State vs. Duke: Who has the edge, plus Matt Charboneau's prediction

It was sore on Saturday morning, but Ward said he should be OK to play when No. 1 Duke and No. 2 Michigan State tip off at 5:05 p.m. Sunday in the East Region finals at Capital One Arena.

Ward injured the hand Feb. 17 against Ohio State and had surgery that night. He missed the next five games before returning for the Big Ten tournament.

More: Tom Izzo vs. Coach K: The agony of (many) defeats

Coaching legends Mike Krzyzewski and Tom Izzo will meet for the 13th time Sunday, in the Elite Eight. Coach K is 11-1 all-time against Izzo. Matt Charboneau of The News takes a look back at the previous 12 meetings.

“Nothing is going to keep me off the court tomorrow,” said Ward, who was icing the hand after practice on Saturday. “And my first thought when I landed on the hand was just make sure everything's all right. My trainers, Nick (Richey) and doc took me back and made sure everything was cool and everything looks good.

Duke's Zion Williamson, RJ Barrett and Tre Jones met with reporters Saturday and talked about facing MSU in the NCAA Tournament for a spot in the Final Four. The game is Sunday night. The Detroit News

“So, basically this morning it was sore. It was sore. But I expected that. It's more a day-by-day type feel.”

As for Duke, the uncertainty surrounds 6-8 freshman Cam Reddish.

He missed Friday’s win over Virginia Tech because of a sore knee. Aside from missing a game against Syracuse in January because of sickness, Reddish had started in every game this season.

“It will be a game-time decision,” Duke coach Mike Krzyzewski said. “He's getting treatment today. We've really not been on the court yet. And after we stretch and — we're not going to really do anything physical today; we've got to be careful. But just to see how he feels.

“And we'll see. If he's progressed, we might try to get him to shoot, but we haven't done that yet.”

Reddish, who is averaging 13.6 points and 3.6 rebounds a game, said the knee has been bothering him on and off for at least a couple months. He said he “tweaked” it during practice the day before Duke played Virginia Tech in the regional semifinals.

More: Wojo: Merciless Spartans show they can take on anything — even Duke

“He's had a little bit of problem with his knee,” Krzyzewski said. “It's not structural — nothing structural. And a jumper's knee, a tendonitis. I guess there are a number of different things. At different times it can inhibit you, or you feel pretty good and then you can play. Or you can work yourself through it. But yesterday we weren't able to do that.”

Reddish didn’t give a guess on whether he’d be ready to face Michigan State.

“We have a great staff here and I’m trying to get back as soon as I possibly can,” Reddish said. “I feel better today.

"The swelling is going down a little bit and I hope I can play tomorrow.

“I’ll do everything I possibly can to play tomorrow.”

Next up: Winner advances to Final Four and will face Texas Tech