Final Four primer: Who's the favorite? Who's watching? Who's tweeting?

Michigan State is a 9-to-5 pick to win it all, trailing only Virginia.

Final Four primer: Who's the favorite? Who's watching? Who's tweeting? 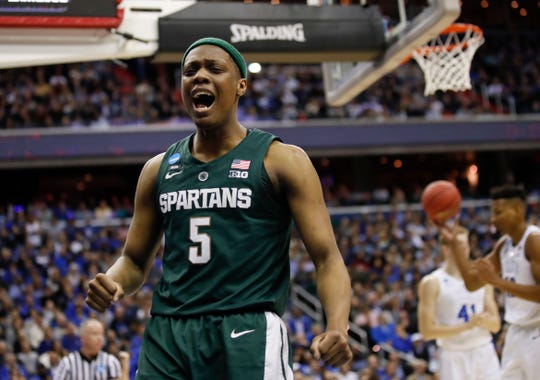 When the NCAA Tournament began, Michigan State was 15-to-1 to win the national championship. Only five teams were ahead of the Spartans. And now, all but one of them are gone.

The one that remains: Virginia.

As such, the Cavaliers (33-3) remain the favorite of the four teams remaining as the NCAA Tournament shifts to Minneapolis, at 3-to-2 odds, according to betting lines released Monday morning by Bovada.

And there went the TV ratings for the Final Four. In theory.

That said, CBS scored a huge victory with the Sunday-night showdown between No. 1-seeded Duke and No. 2-seeded Michigan State. According to the early meter readings, the matchup that everyone expected, and many wanted to see, drew the highest ratings for that region-final time slot in 14 years. In fact, all the region-final games were up over last season, with Auburn-Kentucky up 15%, Virginia-Purdue up 14%, Texas Tech-Gonzaga up 2% and Michigan State-Duke up 4%.

Michigan State is heading to Minneapolis, where it should feel quite at home.

For starters, the Spartans have the shortest travel, by a long margin.

Plus, a couple of Minnesota sports dignitaries already are sending out the rallying cry for the Spartans, including Cris Carter and Kirk Cousins, the Vikings quarterback and former Michigan State star.

Coach Izzo is a dear friend, I’m calling on @Vikings and #VikingsNation to support @MSU_Basketball#Final4https://t.co/Z3V2fdWwI6

So proud of the Spartan basketball team! Can’t wait to see them in Minneapolis next weekend

Hey, we all know the reality with newspapers. They're struggling. They're so-called dinosaurs. Blah, blah, blah.

But, walk around Metro Detroit on Monday morning, and you'll notice something funny — the newspaper racks in gas stations and convenience stores and pharmacies and wherever, they're empty, or light.

That's because everyone loves a "big-moment" front page, and the Spartans delivered those today.

Some of our favorite covers from the Spartans' win over the Blue Devils came from the New York tabloids:

The back page: Duke is going home. https://t.co/geLpmdwEEkpic.twitter.com/HkptajLZjC

And, then, of course, there was ours:

An interesting note on this Final Four, Tom Izzo's eighth: This is his first where neither Duke or North Carolina will be there.

That's significant, given six of Izzo's Final Fours ended in defeat, twice by Duke, and twice by UNC.

Matt McQuaid sure has been a breakout star in this NCAA Tournament.

We asked on Twitter earlier today: Which McQuaid highlight will make the "One Shining Moment" montage: His epic bicep flex earlier in the NCAA Tournament, his dunk early in the win over Duke, his 180-degree layup/prayer against Duke, or all three of them.

You can vote here:

Michigan State is off to the Final Four! pic.twitter.com/cSCxoPcuHl

This stat is crazy (almost as crazy as this being the fourth time in seven years that a team from Michigan will be in the Final Four).

Xavier Tillman, teaching his daughter how to put up four fingers. pic.twitter.com/Fr6mRWnLJa