If there has been any doubt about what pushes Tom Izzo professionally, understand winning another national title is at or near the top of the list.

MSU coach Tom Izzo talks about the win over Duke to reach the Final Four. The Detroit News

If there has ever been any doubt about what pushes Tom Izzo professionally, understand that winning another national title is at or near the top of the list. 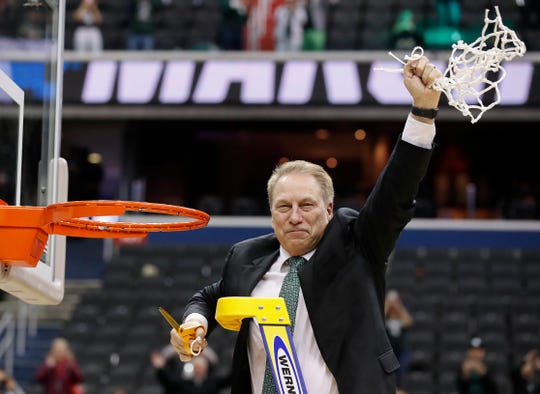 Not long after Michigan State had beaten top-seeded Duke on Sunday in the East Region final of the NCAA Tournament, the Spartans coach was talking about trying to reach the elite level, comparing it to fraternities and sororities. The greater you are, the smaller that fraternity gets.

At that moment, Izzo was talking about his team and its quest to win a third national championship, something that would help the Spartans begin to separate themselves from other programs.

“In my job I want to get to the smallest fraternity and sorority, so I want to make sure that we accomplish things that few have, and that’s kind of getting to the smallest numbers. The Final Four now is eight, but a national championship is two and I’d like to find a way to build on that fraternity a little more, that small one that is out there for us.”

Of course, Izzo could just as easily have been talking about himself. After all, the eight Final Fours he referenced are all his — Michigan State had been to two before he took over 24 years ago — and he has one of the two national titles.

But getting that second national title as a coach always has pushed Izzo. Only 15 coaches in the history of college basketball have won more than one, a fraternity Izzo would love to join. Plenty have one championship, but the best of the best have more than one. From Adolph Rupp to John Wooden to Mike Krzyzewski. It’s an exclusive club, one Izzo has been pushing for ever since getting the first one in 2000.

He’s had his share of chances, and not just the times he’s gotten to the Final Four.

The 2014 Spartans were as talented a group as he’s had. Finally healthy entering the NCAA Tournament, they were a popular pick to win it all. But a hot-shooting Shabazz Napier helped Connecticut beat Michigan State in the regional final on the way to a national championship.

In 2016, the second-seeded Spartans were ousted in the first round by Middle Tennessee State, and last season, a star-studded group went cold and lost to Syracuse in the second round.

But it’s the Final Four trips that ended with no title that linger. Michigan State has reached the national title game just twice under Izzo, winning it in 2000 and losing to North Carolina in 2009. Every other trip ended in the semifinals.

Improving on that is the first step toward reaching that elite fraternity of multiple titles.

“I'll disclose this one thing,” Izzo said Monday. “I'm going to try to win this time. I don't know if I've done a good job of that. … But I'm looking at sometimes, even as a coach, you're just happy to be there, and sometimes I'm trying to look at what can I do better than I did? We had a late, late-night meeting with my staff, and we'll have another one in a little while because I told them, because a couple of them have been with me more than a couple of those Final Fours, let's look at what we did. Let's look at some other programs.

"I might talk to guys like Jay Wright who have done it, and guys like that and figure out different approaches. Did you grind it? Did you let them just go loose? Sometimes guys get too tight in the Final Four. Sometimes there's so many distractions they get distracted in a Final Four. So, it's just trying to find it.”

None of this is to suggest that getting to a Final Four is no big deal for Izzo. You saw that in the reaction on Sunday. Yes, some of that was because he’d finally gotten a second win in 13 tries over Krzyzewski, but it was much more about getting to the pinnacle.

Not every coach can say they’ve gotten as far, and few have done it as often as Izzo. Only four coaches in college basketball history have been to more Final Fours than Izzo — Krzyzewski, Wooden, Dean Smith and Roy Williams — all giants of the game, all likely to end up on a Mount Rushmore of college basketball coaches if one existed.

That’s a fraternity Izzo doesn’t mind, either. Still, he always has pushed his players to be elite, has pushed for his program to be elite.

In Izzo’s mind, hoisting another trophy next Monday night might put him in that same category. He appreciates the shot now, especially after failing to get out of the first weekend of the tournament in each of the last three years, but championships are what separates the best of the best.

“I know one thing, I look at it now like who knows if you'll ever get back?” Izzo said. “I thought that early on, and then we went to three in a row, and I probably got a little spoiled myself. Right now, I'm going to enjoy every bit of it, but I'm going to try to find a way to do things a little differently because we have been to seven others and only one won. That means that maybe we're not doing everything right when we get there. We're trying to look into that seriously and yet still enjoy the process.”

Bob Wojnowski and Matt Charboneau break down Michigan State's win over Duke to reach the Final Four. The Detroit News

Coaches with most Final Fours