Players from Michigan State's 2000 national title team say this season's Spartans share many of the same qualities that can earn them a championship. 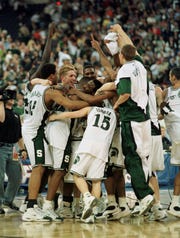 Aloysius Anagonye is watching from Paris, believing the Michigan State basketball program continues to impart ideals of American culture idolized throughout the world.

The Detroiter is excited about MSU’s run this season, but probably not as much as Leon and Fletcher Ballinger, the young sons of Adam, a redshirt freshman on the 2000 national championship team.

Ballinger allowed the boys to miss the first part of school on Monday morning in Melbourne, Australia, to watch the Spartans take down Duke in the East Region final.

While many of coach Tom Izzo’s players since 2000 have joined that team in the Final Four club, A.J. Granger, a member of the All-Tournament team that season, thinks this year’s squad has the mix to join them in the more exclusive club as national champions.

“This team probably more than any is probably pretty close to what we had; it’s funny to watch,” Granger said Wednesday from Findlay, Ohio. “It’s probably the cohesion of the team, and when you watch them play, you call tell they have that moxie and that swagger; they can count on the guys that are on the floor, and the guys on the bench, they can insert into situations, and they finally — after so many years, I feel — have a guy they can go to when they need a bucket.

“There’s a lot of similarities.”

Cassius Winston is playing the role of Mateen Cleaves this year, the unquestioned leader of a team two wins away from giving Izzo his second title this weekend in Minneapolis.

Who knows what kind of celebration that would set up at the Ballingers, who in a must-see video for MSU diehards, embraced after Winston dribbled out Duke’s day Sunday as Ballinger held up his sons, chanting “We Hate Duke!” with Leon and Fletcher’s Australian accents proving that hating the Blue Devils is a global phenomenon.

Monday morning in Australia watching @MSU_Basketball go to the Final Four! The boys got to go late to school and yes those are the same shorts we wore in 2000 to win the National Championship 😎👊 pic.twitter.com/eZRTdOZJVc

“It’s amazing how many people over here follow basketball and know about that team and the players on that team, and they know the championship players in that game,” Ballinger, an illustrator in retirement who is four years removed from a 12-year professional playing career throughout Australia. “A lot of people know about Michigan State and Coach Izzo, even though college basketball isn’t as big of a deal here. It’s still widely respected.”

Anagonye, the former Detroit St. Martin de Porres star, also had many “Go Green” calls from fans throughout more than a decade of playing in Slovenia, Italy, Spain, France, Israel, Greece and Turkey.

Anagonye has been staying up late to watch games while communicating with friends on the phone and online. With streaming delays, he often hears cheers from friends before he actually sees the plays happen.

“They have their own personality, their own flair,” Anagonye said. “But just the principles behind it, also sticking together. It reminds me a lot of my first year at Michigan State.”

Many of the themes from 2000 ring true this year: The in-state warrior point guard, Kenny Goins as the experienced stretch four like Granger; dealing with injuries to Nick Ward and Josh Langford like Cleaves’ early-season foot injury and then ankle injury in the finals win against Florida; freshmen like Jason Richardson and Anagonye playing key roles like today’s Aaron Henry and Gabe Brown; and wings like Mike Chappell and Morris Peterson running transition and shooting threes like Matt McQuaid and Langford before his season-ending injury.

“The next thing was to understand the self-sacrifice,” Anagonye said. “A lot of players, like Charlie Bell with the player he turned out to be, everybody didn’t get the chance to shine, because they said, ‘What would be better for the team?’

“That was a big factor. Even myself, I knew as a freshman I wanted to do a lot of things, but my job was to wear the other big man out to make it easier for the seniors to do their job. I had to sacrifice that.

“As I grow up, I understood that was the makeup of a good team. Being able to come to the locker room, everybody appreciated the things you did on the court, the little things you did, the charge you took. It became something unspoken, a little thing with each other, learning to pick each other up when you fell on the floor.

“It’s just the idea that everybody had to understand how important their role was. We made sure that we appreciated everybody’s role.”

Closer to home, Mat Ishbia imparts those leadership and team lessons every day as CEO of United Shore, a wholesale mortgage lender in Pontiac.

The walk-on point guard from Birmingham Seaholm said Izzo made the players maximize their abilities.

“To be the best in the country, the best in world, you have to be held accountable,” Ishbia said. “For me, holding me accountable is to not dunk the ball, but to get on the floor for a loss ball, run the offense smoothly, it makes you be the best version of yourself.”

More: Michigan State's Tom Izzo reaches for place among best of the best

Ishbia also brings the family atmosphere and a touch of green and white to United Shore, hiring teammates Adam Wolfe as a chief legal officer and Chris Hill on the capital markets team.

After coming in as a top-50 recruit, Wolfe redshirted in 2000 and played all season on the white squad as the white practice jersey reserves, redshirts and walk-ons gave the starters all they could handle in practice.

“What’s unique about the team and unique about Coach Izzo is his ability to get people to buy in,” Wolfe said. “If you understand that everybody has a role and no one person’s role is anymore important or less important than any other’s.”

Leading from the point 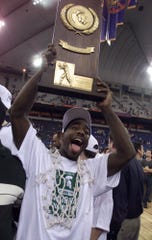 Mateen Cleaves not only was the point guard on Michigan State's national title team in 2000, he was the unquestioned leader, teammates say. (Photo: Michael Conroy, Associated Press)

When Ishbia needed to find someone to “lead his leaders” at United Shore and coach them up, he turned to the famous leader from 2000.

"Who’s the best leader I know? It’s Mateen,” Ishbia said. “So I got him to coach my 340 leaders here. How do I get them better? Get him and convince him to join, because he’s just about as smart as a guy I know.”

The leader this year is Winston, who has a chance to join Cleaves and Magic Johnson as national championship point guards for MSU.

“There’s room at the table for Cassius and I’ll even pull the chair out for him personally,” Cleaves told the Associated Press on Wednesday.  “I’m excited for him and I think he deserves it. Having won it, I know how it feels and it gets even better as you get older. No matter what, no one can take that away from you and you’re a staple in college basketball for the rest of your life.”

Wolfe said during regional victories at The Palace of Auburn Hills against Syracuse and Iowa State, Cleaves willed the team to the Final Four.

“Having sat on the bench and experienced it in person, I can wholeheartedly agree that it was truly the case that Mateen was not going to let this team lose,” Wolfe said. “Having a leader on the team, especially a point guard, who can control the tempo and control the mindset of the team, really the point guard is the head and the body follows. Having Mateen be able to do that, it is in many ways similar to what Cassius has been able to do so far this year.”

When Winston led the Spartans through Duke, Granger saw that familiar look in the eyes of Izzo.

“When he came out in the beginning of that game, you could tell that they were in it to fight and they were ready to play,” Granger said. “I haven’t been able to say that about some of the other teams I’ve seen in year’s past.”

Back then, Izzo famously put players in football shoulder pads and helmets to breed toughness, but also staked the odds against the starting unit to simulate Florida’s high-octane press under the championship lights in Indianapolis.

“Everyone thought we couldn’t keep up with Florida, but we run all the time, and they weren’t going to run us out,” Ishbia said of the white squad. “I remember distinctly in practice, to emulate the Florida press, Izzo put six of us on defense, they scored, then a seventh, they scored. He put eight guys out there, and Mateen and Andre Hutson kept breaking the press. That’s when he knew were were ready."

That toughness brings us back to Anagonye, who will be tuned in for about a 3 a.m. start in Paris for the national semifinal against Texas Tech on Sunday morning.

“It kind of proves a point: Traditions and doing things the right way has always made you successful, so you stay with that,” he said. “When I tell people I’m from Michigan, the first thing they talk about is toughness. ‘Detroit, Bad Boys, you guys are tough, we love these things.’ I look around and I don’t want to lose our identity.

“The U.S., they love the idea of grit, of dealing with bad times, how to deal with it, and they learn from it, and they look up to us. I’m really glad at Michigan State, we’ve stuck to our tradition. We haven’t tried to change or mold or try be something because it’s 2019. Because now the rest of the world is starting to ask me questions like, ‘How can we be like you?’ Instead of you guys should be like us.

“That’s something that I don’t think a lot of people in the U.S. understand. Don’t lose that, don’t lose that identity, because that’s what made us great.”