Michigan State is back in the Final Four for the first time since 2015, and the fans have made the trip as well.

Minneapolis – Michigan State is back in the Final Four for the first time since 2015, and the fans have made the trip as well.

The Spartans went through their open practice at U.S. Bank Stadium on Friday in preparation for Saturday’s 8:49 p.m. matchup with Texas Tech, and the Michigan State faithful were out in full force as at least 5,000 fans were in the stands for the final open practice of the day. 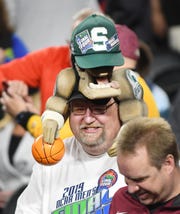 “I think it’s huge,” Michigan State athletic director Bill Beekman said as he stood courtside. “I think it’s huge for MSU basketball, for Tom and the team, but I think it’s also big for the university, the community and the state. It’s sort of a good shot in the arm, a really good-news story with a wonderful group of guys.

“I’m convinced that when we play well, even people that maybe aren’t interested in sports have a little more spring in their step. I do think it gets people enthusiastic. It creates a good energy.”

It’s coach Tom Izzo’s eighth trip to the Final Four and the second time he’s been a part of the event in Minneapolis. On Friday, Izzo thanked the crowd while asking all the Minnesota fans to jump on the bandwagon with a fellow Big Ten team.

It was a heavy Michigan State crowd on Friday and one Beekman expects to carry over for the games on Saturday.

“We sold out our 3,500 tickets in a heartbeat,” Beekman said. “My guess is there will be a lot more Spartans here than that. People are trying to get tickets any which way they can and we’re the closest of any team to Minneapolis, so I think we’ll show really well.”

The festive atmosphere at the stadium on Friday was an extension of the impromptu celebration at the Breslin Center on campus late Sunday night when the team returned home after beating Duke in the East Region final earlier in the day.

“That was actually extraordinary,” Beekman said. “It’s moments like that that are really touching because we’re rolling in at 12:30, 1 o’clock in the morning or whatever it was, and to see thousands and thousands of people there to greet the team really for only a handful of minutes of talking, was really special. It was pretty cool.”