Five players who stood out in Michigan State's spring game

Five players who stood out in Michigan State's spring game 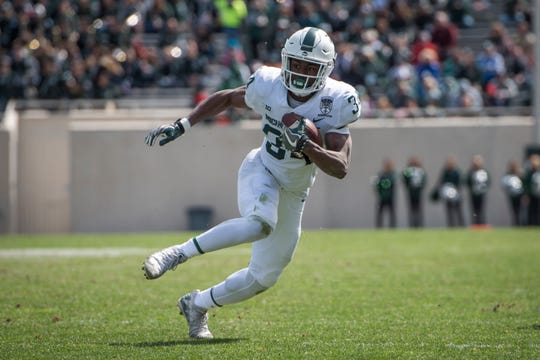 East Lansing — It will be more than four months before anyone sees Michigan State on a football field again, meaning Saturday’s annual spring game will be what many draw conclusions from when it comes to predicting what might happen in 2019.

Of course, the frustration of 2018 will play into those predictions, as well. Despite having one of the best defenses in the nation, Michigan State’s offense was the worst in coach Mark Dantonio’s tenure as injuries mounted throughout the season and led to a shuffling of the coaching staff this winter.

How much those moves affected the Spartans this spring was hard to see, but that doesn’t mean there weren’t some interesting individual performances Saturday. Here’s a look at five players that stood out in the Green and White game.

The fifth-year senior answered any questions about the health of his arm, completing 14 of 20 passes for 181 yards and two touchdowns. The numbers were solid, but it was the way Lewerke threw the ball that gives the Spartans plenty of optimism headed into the offseason. After playing the second half of last season with an injured throwing shoulder, Lewerke had lost much of his velocity and his accuracy took a hit. It only compounded a slow start to last season that resulted in seven interceptions in the first six games and led some to wonder if the Spartans should give sophomore Rocky Lombardi or, perhaps, redshirt freshman Theo Day a shot at taking over.

But the way Lewerke threw the ball into a stiff wind on Saturday, with velocity and accuracy, showed any plans of moving on from Lewerke might be a bit premature. “I thought he threw the ball effectively, as I said I think he's done that throughout the spring,” coach Mark Dantonio said. “His arm strength is good, doesn't mean it's going to be on the money all the time, but his arm strength is good and he looks healthy. I hope his confidence is there; that's what I plan on and it seems to be based on how he performed today.” 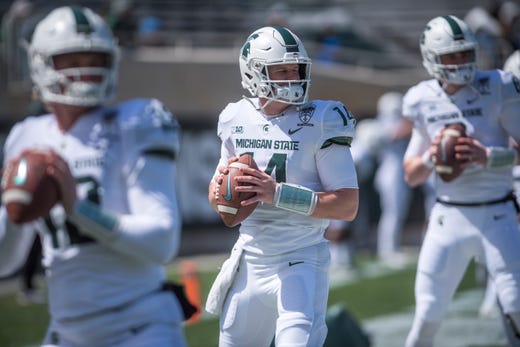 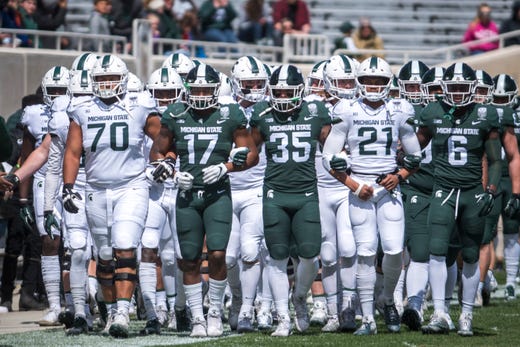 Sparty leads out the football team. Special to The Detroit News
Fullscreen 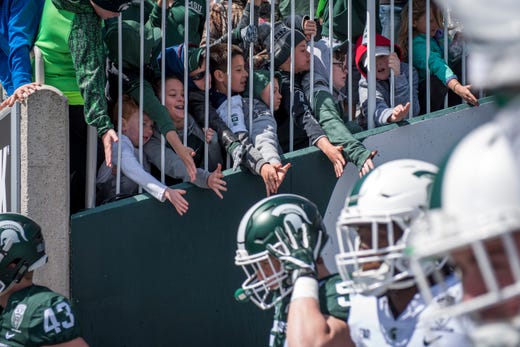 Michigan State fans hold their hands out for high fives. Special to The Detroit News
Fullscreen 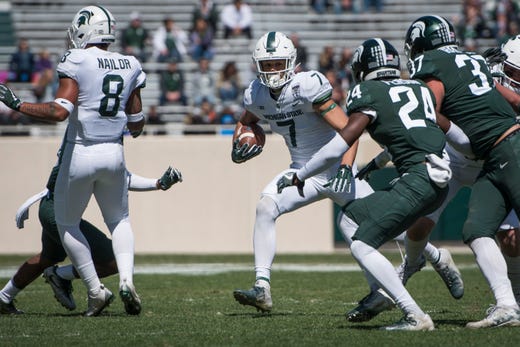 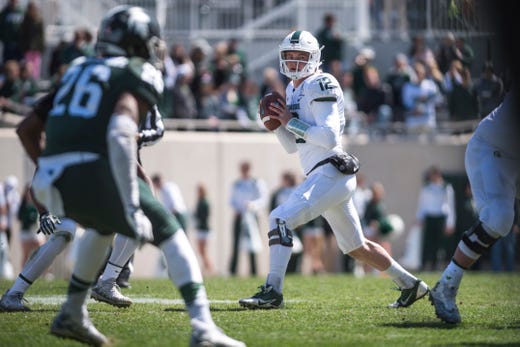 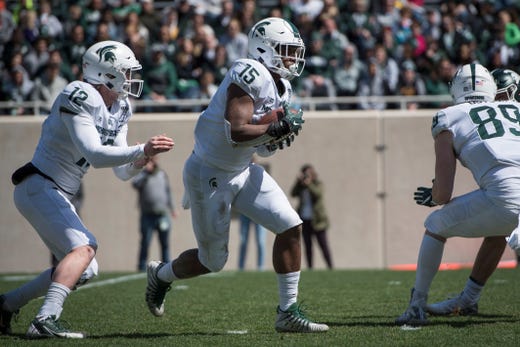 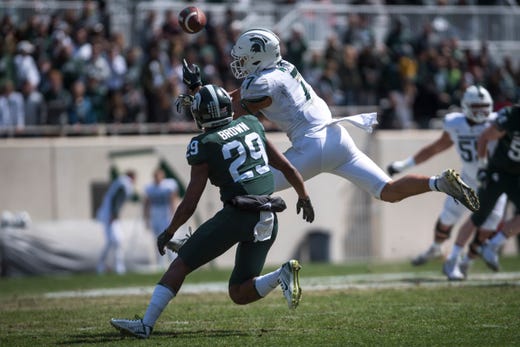 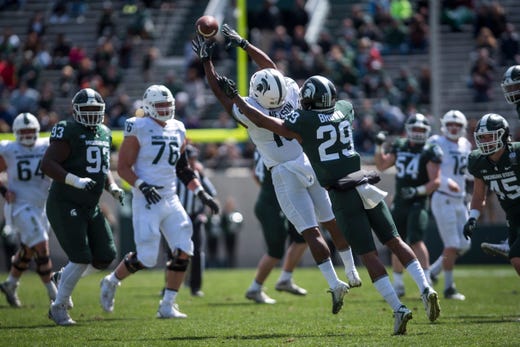 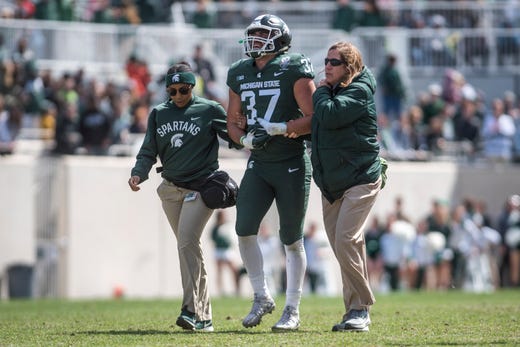 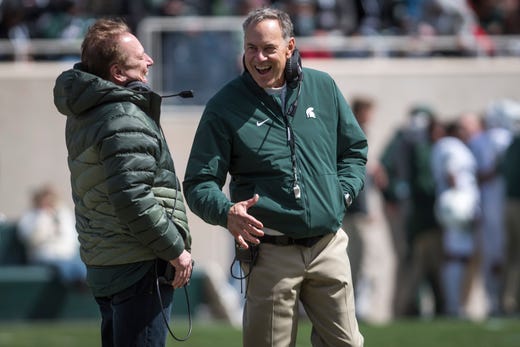 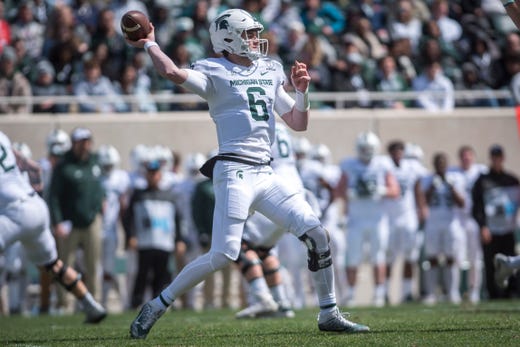 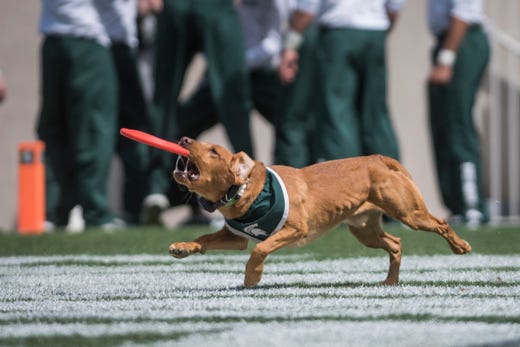 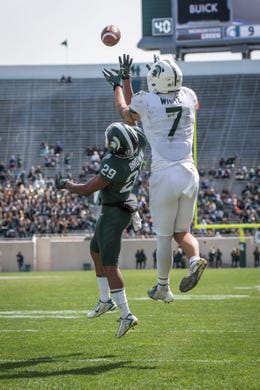 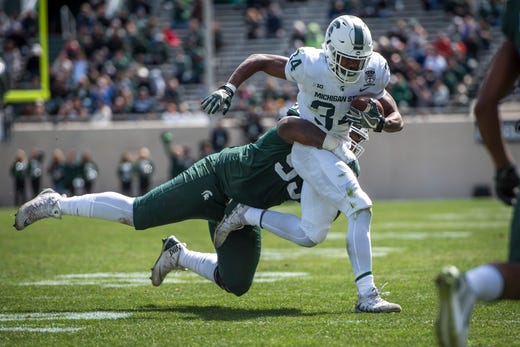 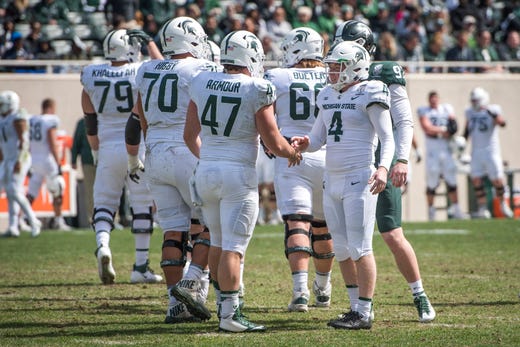 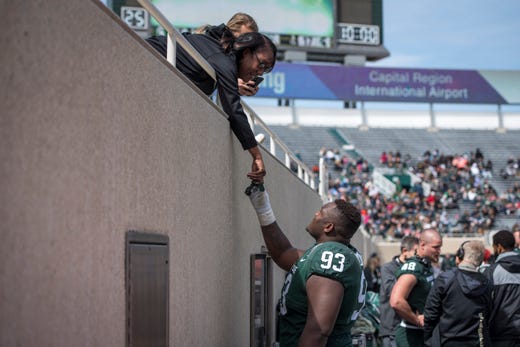 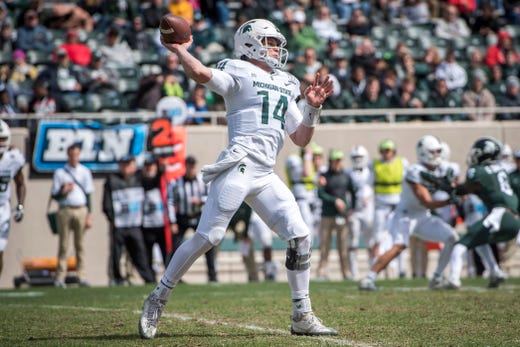 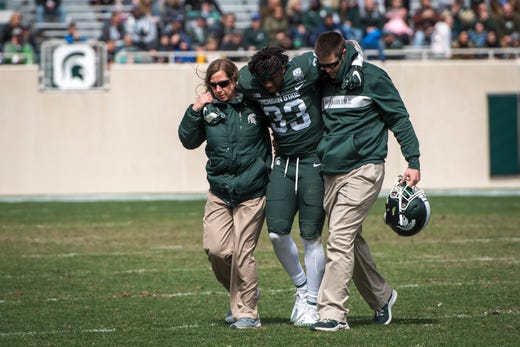 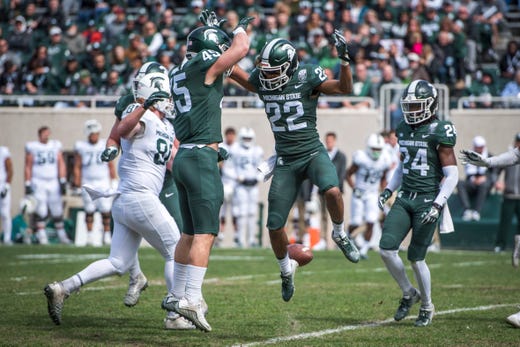 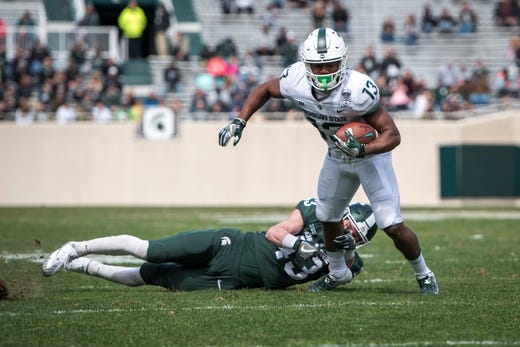 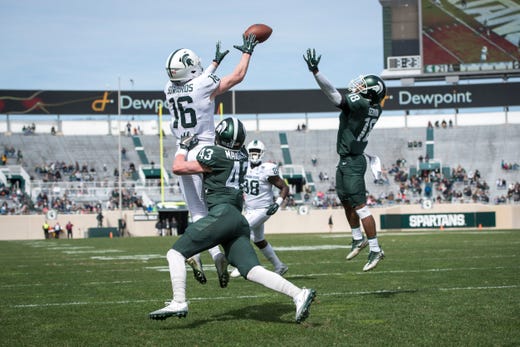 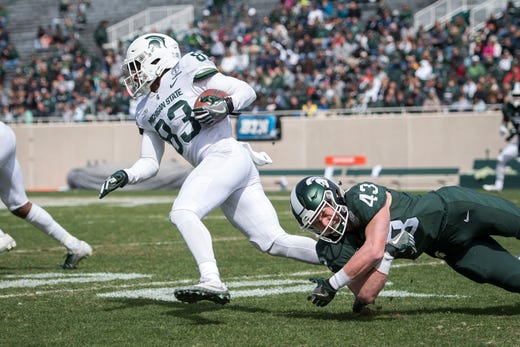 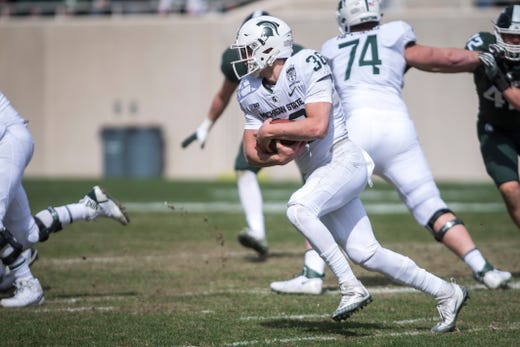 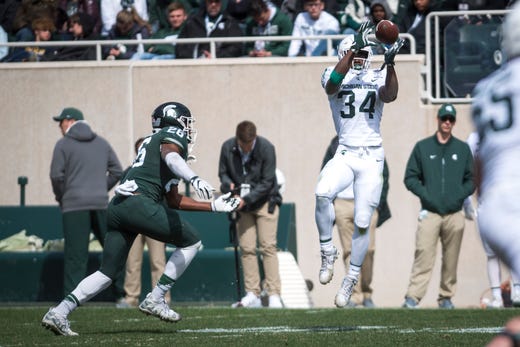 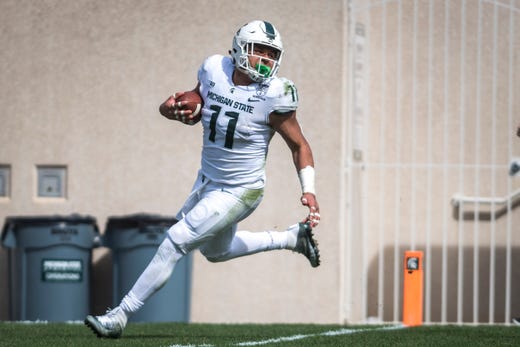 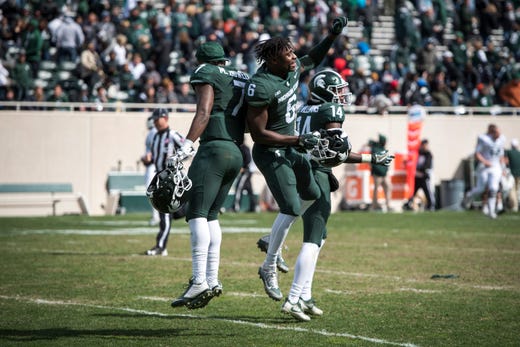 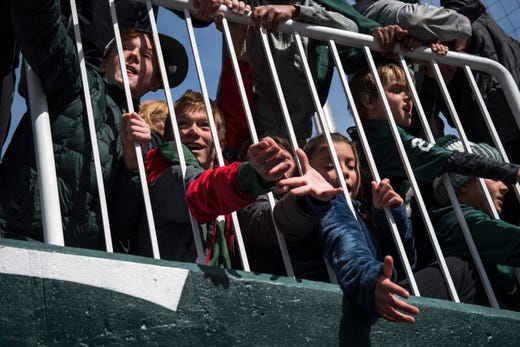 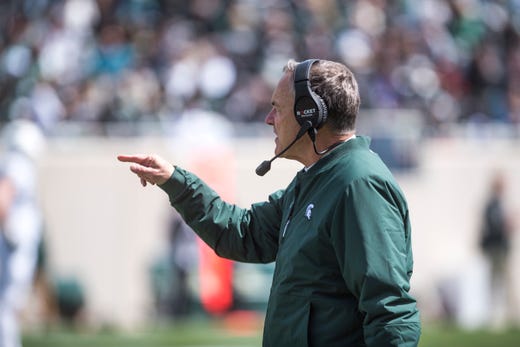 Injuries hit the Spartans’ offense hard in 2018 and wide receiver was at the top of the list as Felton Davis was lost to a ruptured Achilles and then-sophomore Cody White missed four games with a broken hand. Stewart, the third of the three returning starters, battled ankle injuries and missed two games but still managed to lead the Spartans in receiving with 48 receptions for 413 yards and just one touchdown. In Saturday’s spring game the fifth-year senior showed once again why he has been one of Lewerke’s favorite targets, catching five passes for 82 yards and two touchdowns.

Stewart will be the veteran of a group that is expected to be among the best in the Big Ten again, as White is back for his junior season and Jalen Nailor expects to build of a solid freshman campaign that also was slowed by injury. There will be plenty of weapons in the passing game for the Spartans, but Stewart proved he is as steady as they come for an offense searching for a break out.

The battle for carries might not be wide open for the Spartans, but there certainly is a chance for someone to jump up and put a stranglehold on the position, and the true freshman who is enrolled early showed why he is already opening eyes in spring practice. The numbers were good — nine carries for 26 yards — but the 6-foot, 191-pounder showed some elusiveness and could push to see some time this fall in a battle for carries with junior Connor Heyward, sophomore La’Darius Jefferson and redshirt freshman Elijah Collins.

“He's quick, he's got a good first step, and good cut-back ability,” Dantonio said. “I think he's got good vision, he can catch the ball well. He's just learning the position, he's not topped out, he's just had 14 practices so he's still learning. Really all spring he's shown things that remind you of Jeremy (Langford) a little bit in terms of his ability to cut back.”

There’s not much doubting the talent of the junior, who played in only five games last season after injuring his knee in preseason camp. After missing the first eight games, Scott returned to break up seven passes and record a pair of interceptions while earning defensive MVP honors in the Redbox Bowl with four pass breakups and three tackles. He showed no ill effects of the injury Saturday, intercepting one pass and recording three tackles. “I thought Josiah Scott made an outstanding play, really made a couple of outstanding plays,” Dantonio said.

It might be the last chance for Michigan State fans to see Scott play in a spring game. The former freshman All-American likely will rank high on NFL Draft boards by next spring, especially if he has a big year in 2019, as the Spartans are expecting. “The pressure is something I want,” Scott said. “I've trained for this my whole life, it just comes naturally.”

The former Detroit Cass Tech standout was the highest-rated player in Michigan State’s 2018 recruiting class, but saw action in just one game last season. In Saturday’s spring game, the 5-11, 185-pounder looked more like the player he was in high school, playing quickly while having a nose for the football. He finished with three tackles and a pass breakup and along with sophomore Shakur Brown showed the Spartans have plenty of depth at cornerback behind Scott and fifth-year senior Josh Butler, the two likely starters.

“I think we have good young players,” Dantonio said. “Kalon Gervin is a guy that I think has made his move a little bit. Shakur Brown has had a good spring as well. Those guys are both — I feel like they can both play at this level and be successful. They can really run, good ball skills, things of that nature.”