Tony Mandarich helped Michigan State win the 1988 Rose Bowl, but the victory was tainted by steroid use, including by Mandarich. 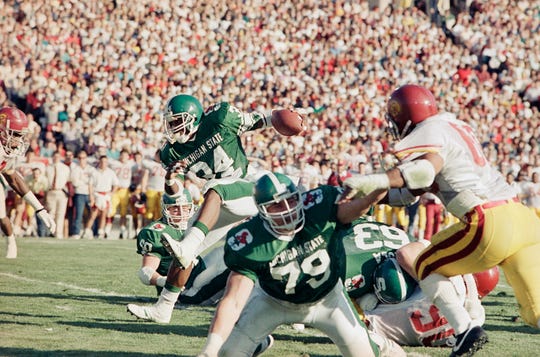 East Lansing — All of a sudden, the focus shifted from Ann Arbor to Michigan State.

A generation after the gridiron heyday of coaches Duffy Daugherty and "Biggie" Munn, George Perles arrived on the sidelines of Spartan Stadium to snip some of the spotlight from Bo Schembechler, whose tenure at Michigan already had been embossed in legend.

The 1987 Michigan State football team, immense in size and smashing mouths, ran off a nine-game unbeaten streak to win the Big Ten championship and the 1988 Rose Bowl.

“Going into 1987, there was a lot of optimism,” said Steve Grinczel, who covered the team for 24 seasons for Booth Newspapers. “But there wasn’t any talk of championships.

“Michigan and Ohio State were still the big dogs.

“They just kind of got on a roll,” Grinczel said of the Spartans. “They were the epitome of power football, old-school, smash-mouth football.”

With men’s basketball in the doldrums and more attention on ice hockey, as the unbeaten streak extended, attention on the football team built to a crescendo.

“People were itching for something to happen, and it turned out to be football, in ’87,” said Grinczel, the author of “Michigan State Football: They Are Spartans.”

Victories came on the legs of the indefatigable All-American running back Lorenzo White, the hands of receiver Andre Rison, a first-round NFL draft pick, and the foot of the All-American punter Greg Montgomery, whose 86-yard punt helped bury Michigan in a critical 17-11 win.

'Too big, too fast, too strong'

There were whispers about Mandarich.

“About the only thing wrong with Tony Mandarich is he`s too big, too fast, too strong to be true,” the Chicago Tribune reported, two seasons later, as Mandarich auditioned for the NFL, where he would go on to play with little impact on the field for Green Bay. “The Michigan State offensive tackle broke the mold, the scale, the stopwatch.”

He also broke the law, as Mandarich admitted in 2008, nearly two decades after The Detroit News reported it.

More: Who sizzled, who fizzled from the first round of the 1989 NFL Draft

Mandarich and 1987 Spartans were, in fact, too good to be true.

After two months of interviewing more than 100 players, parents, police officers and doctors in six states, The News reported that as many as seven players fooled examiners hired by the NCAA on the eve of the Rose Bowl.

They used the urine of others, carried in plastic bags taped in their armpits, attached to tubes that came out between their legs.

Mandarich’s name surfaced in most interviews as supplying steroids. He even injected players afraid of needles.

“Tony injected me with testosterone (an anabolic steroid) about seven or eight times,” said defensive tackle Jeff Case, a freshman walk-on during the 1987 season, according to the report.

Asked if he was aware of the abuse, Perles told The News, "No. No. I'm honest, I answer them all honestly.

Eighteen years later, Mandarich admitted the abuse, providing steroids to other players and to evading detection before the Rose Bowl.

“I'm surprised,” Perles said, then. “He's a good person and a great guy. I'd never have anything negative to say about him or any of my players. I don't know what his motive is to come out with this now.”

“It was a different time,” Grinczel said of the 1987 season. “I think there was a naivete about what athletes were doing.

“There were isolated cases. But, it wasn’t to the point that everyone was suspects. I think everyone wanted to believe everyone was on the up-and-up.

“But, as things went on at that time, everyone who covered the beat closely knew there was something going on, and we were all kicking over rocks,” the veteran beat reporter said.

“There was an offensive lineman who came back after summer break and he had gained something like 75 pounds of muscle in a few months.

“It was nebulous. But, you couldn’t report it.

“I had tips and before The News broke the story,” Grinczel said. “I was chasing down tips and other reporters were, too.”

The scandal and the brilliant football season occurred amid an environment of escalating concern about steroids and sport.

At the 1983 Pan-Am Games, 15 athletes failed surprise tests for steroids.

A year before the 1988 Rose Bowl, the All-American linebacker Brian Bosworth and two of other Oklahoma players were banned from the Orange Bowl after testing positive for anabolic steroids. 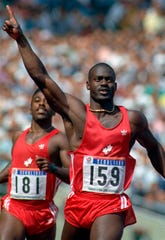 Canada's Ben Johnson gives a No. 1 sign after setting a world record for the men's 100-meter and winning a gold medal in the Seoul Summer Olympics in this Sept. 24, 1988 photo. The time was 9.79 seconds. Olympic officials later stripped Johnson of his gold medal and world record at the games in Seoul, after he tested positive for steroids. (Photo: Dieter Endlicher, Associated Press)

The Olympian sprinter Ben Johnson, of Canada, who vied with the American Carl Lewis in a highly-publicized competition for the title of “world’s fastest human,” lost a gold medal at the 1988 Seoul Summer Olympics, after testing positive for stanozolol, an anabolic steroid.

On Nov. 18, 1988, President Reagan signed a law outlawing the non-medical sale of steroids, after Congress acted to place them in the same legal class (Schedule III) as amphetamines, methamphetamines, opium and morphine.

A study by the National Institute of Drug Abuse published Dec. 16, 1988 determined that 6.6 percent of 12th-grade male students use or have used anabolic steroids.

About 21 percent of users reported that a health professional was their primary source.

“The evidence indicates that educational intervention strategies should begin as early as junior high school; the intervention should not be directed only toward those individuals who participate in school-based athletics,” the report suggested.

“This prohibition applies to all illegal drugs and controlled substances, including steroids,” Vincent wrote.

In the absence of testing, enforcement or additional notice of the prohibition, players and management later asserted they were unaware of Vincent’s ban.

It led to a juncture many call “the steroids era” of baseball, and some record-breaking performances that are still viewed as dubious by some fans and critics.

“Steroid use probably started in college in the early 1960s,” said Charles Yesalis, a professor of health policy and administration, at Penn State, and an author of the 1988 study. “It just continued on and, I believe, is still going on to some extent, primarily with growth hormone use.

“It started by word of mouth coming out of weight-lifting, power-lifting, track and field and so on. And, these drugs work fabulously well to increase strength and muscle mass.

“There’s very few sports in which a good big man won’t beat a good little man,” said Yesalis, who is also the author of “The Steroids Game, an Expert's Inside Look at Anabolic Steroid Use in Sport.”

“There were some places early on in college ball that were epicenters,” he said.

“I certainly wouldn’t have cast those aspersions for the last 25 years, because it just spread all over.

“If you look at the size of college football players as relative to what they were 20, 30 years ago, they’re all huge and they’re all strong,” Yesalis said. “By the '80s and '90s, it was all over college football and professional football. Not everybody was using, but it was very widespread.”

The NCAA adopted a drug testing program at its 1986 convention, 16 years after its Drug Education Committee conducted a survey of 1,000 male student-athletes found that 40 percent said “drug use was a slight or growing problem among varsity athletes.”

In 2006, the NCAA expanded the testing to the summer months.

Most major colleges and many lesser ones conduct their own testing.

While Yesalis and other critics say they believe the abuse remains widespread, including the human-growth hormones, and that testing remains relatively easy to evade, the NCAA officials say they have confidence their enforcement is effective.

“The procedures and tactics have changed considerably,” said Christopher Radford, a spokesman for the association.

“We utilize an updated deterrence strategy developed by USADA (United States Anti-Doping Agency) that is based on a mathematical model.  In addition, the laboratory methodology has improved substantially, allowing detection at low levels for a much wider array of anabolic steroids and metabolic modulators.”

Radford said the NCAA is “very confident” it is detecting all offenders.

“Indeed, our year-round random drug-testing results match very closely with our self-report surveys — surveys that have been validated as accurate as well,” he said. “Additionally, the NCAA focuses on providing educational resources to the member schools and student-athletes on the risk of contamination involved with supplement use.

“The critics need to understand that we also target the highest-risk sports. For example, every DI football team is tested, and a large number of FBS schools are re-tested on multiple occasions,” Radford said.

“Our out of competition testing dwarfs other national/international drug testing.”