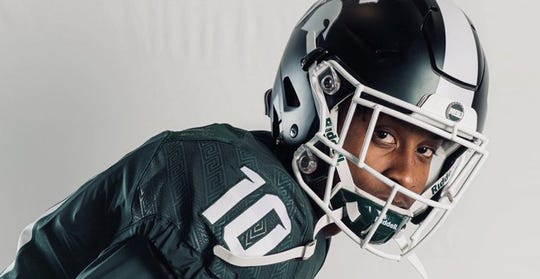 Ricky White, a receiver from Georgia, has Michigan State near the top of his list of schools. (Photo: Twitter)

Michigan State was the first Power 5 school to offer Marietta (Ga.) Wheeler wide receiver Ricky White. That, along with a good visit to East Lansing, has helped the Spartans stay atop his list even as offers continue to come in this spring.

White has offers from schools closer to home, but has some ties to the Midwest as well.

“He has family from the Dayton, Ohio, area, so he has roots in the northern, Midwest corridor,” Wheeler assistant coach Ryan Brady said, “and I think his speed and athleticism would translate well to schools up north. I don’t think weather is a problem or proximity because he does still have some family up there, so if he does choose to go to school in that area, I think he’s going to flourish.”

Wheeler has a new coaching staff, but Brady is a holdover. He has been coaching White since he was a sophomore and White asked him to take an active role in his recruitment as well.

Brady describes White as quite unassuming, so when he first began getting to know the younger players in the program, White was not initially noticeable. He played junior varsity initially, but it did not take long for them to find his talent.

“We threw him out there in a JV game and he went absolutely off,” Brady said. “We were like, 'Wow, we need to put this guy in a varsity uniform.' We had an older kid, a D1 receiver who is at West Point right now playing for Army, and he tore his knee up so we needed somebody to step up and Ricky was able to grab the bull by the horns and make some plays as a young kid.”

Shorty after he was pulled up to the varsity level, White had another breakout moment.

“We played Lambert High School; we lost to them,” Brady said, “but they had a kid who was an SEC defensive back commit and Ricky just ate him alive to where they had to put another kid on him. That was probably his coming-out party. He had a real solid second half of his sophomore year and then last year, he tore it up, had some of the best numbers in the state of Georgia. Once coaches were able to eyeball him after seeing the film, offers started rolling in.”

White is described as a great kid and good student. He also is described as effortless on the football field, a player who can make defenses pay for trying to single cover him.

“He’s real smooth coming in and out of his breaks,” Brady said. “He’s pretty well versed at getting off the line against press coverage, has natural ball skills. He reminds me a lot of Peter Warrick, a guy you can throw a five-yard hitch to and he can make two or three defenders miss and take it to the house. He’s a great athlete who brings a lot of his attributes from basketball to the football field.”

Michigan State has several players from Georgia on their roster, including Connor Heyward and Tre Person. White described East Lansing as a “home away from home” during his visit.

HOME AWAY FROM HOME ! 🤔 #Spartanspic.twitter.com/MQfGhsaatI

He plans to return to Michigan State for an official visit in June.

White does not currently have a commitment date set.

Michigan State is considered one of the top contenders for Cincinnati Moeller defensive back Carrington Valentine. He visited campus again last week and described the visit as “great.” He confirmed the Spartans are one of his top schools, along with Boston College, Duke, Wake Forest, Pittsburgh and more.

He has not truly cut his list of 20 offers down yet.

The 6-foot, 178-pound Valentine plans to commit before his senior season begins.

The 6-foot-2, 190-pound Sanders is an outstanding athlete noted for his high-flying ability on the basketball court, as well as his highlight-reel catches in football.

Sanders’ father played at Michigan, but the Wolverines have not offered yet.

He is coached at Beecher by former Spartans receiver Courtney Hawkins.

Purdue, Kentucky, Indiana, West Virginia and Minnesota are among his other offers.

Allen Trieu covers Midwest football recruiting for 247Sports. He has been featured on the Big Ten Network on its annual Signing Day Show. His Michigan and Michigan State recruiting columns appear weekly at detroitnews.com.