A few weeks back, former Michigan State running back Le’Veon Bell said two women robbed him of more than $500,000 worth of jewelry. 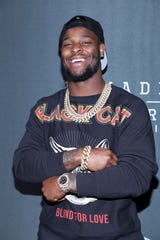 A few weeks back, former Michigan State running back Le’Veon Bell said two women robbed him of more than $500,000 worth of jewelry.

On Friday, TMZ posted audio of the New York Jets star’s 911 call to police near his home in Hollywood, Fla. In that call, Bell describes how he left his home for his daily workout, leaving two women at home in his bed. When he returned, he noticed the missing items.

“Well, I had two girls in my house,” Bell said on the call. “And I got up, and I did my normal routine to go to work out. So I left the workout for a couple hours. When I came back, they took my money, they took my watch, my jewelry, a couple more of my things of value out of my house. I don’t know where they’re at. I tried to call them before I called you guys. I tried to call them and they’re not answering me, and they’re ignoring me.”

In the call, Bell estimates that the total value of all of the stolen items was approximately $1 million.

Bell describes the women as his “girlfriends.”

Bell, who left Michigan State after his junior season in 2012, was selected in the second round of the 2013 NFL Draft by the Pittsburgh Steelers. The three-time Pro Bowler sat out all of last season in a contract dispute with the Steelers and signed a four-year, $52 million deal this March with the Jets.