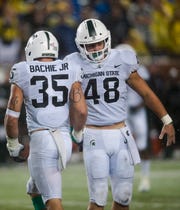 East Lansing — Michigan State broke preseason camp Thursday, and before the Spartans headed for a couple of days off, they also named this season’s captains.

It's the first time Michigan State has named four captains since 2009.

Bachie and Lewerke are the fifth and sixth players under coach Mark Dantonio to be named captain more than once. Quarterback Kirk Cousins was a three-time captain while linebacker Greg Jones and defensive end Shilique Calhoun were two-time captains.

Lewerke enters his final season having started 25 of 28 career games. He was hampered last season by an injured right shoulder, but was healthy by spring practice and has solidified his spot as Michigan State’s starter throughout fall camp. He’s completed 56.7 percent of his passes (461-of-813) in his career for 5,214 yards, becoming the 10th MSU QB to hit 5,000 career passing yards.

Bachie has stared 26 of 32 career games and has been named to numerous preseason All-American teams, including the Associated Press first team this week.

Willekes, who had 20.5 tackles for loss last season and was named the Big Ten Defensive Lineman of the Year, earned second-team preseason All-American honors from the Associated Press.

Williams has started 29 consecutive games at nose tackle and has 112 tackles in 37 career games with 21.5 for loss and 6.5 sacks. He was named this season to the watch list for the Outland Trophy.

MSU names four captains for the first time since 2009 https://t.co/KGaNOAi8uu