After a disappointing finish to last week’s game against Arizona State, Michigan State gets a fresh start in its Big Ten opener at Northwestern on Saturday at noon. 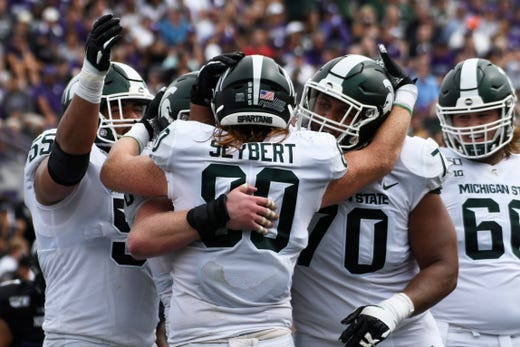 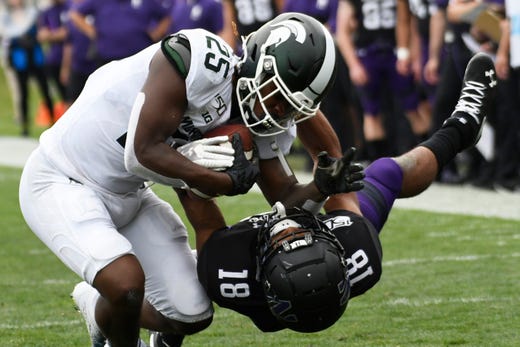 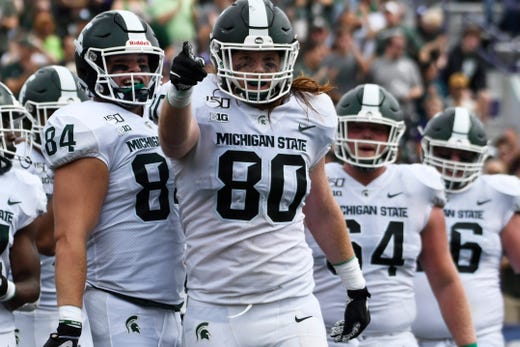 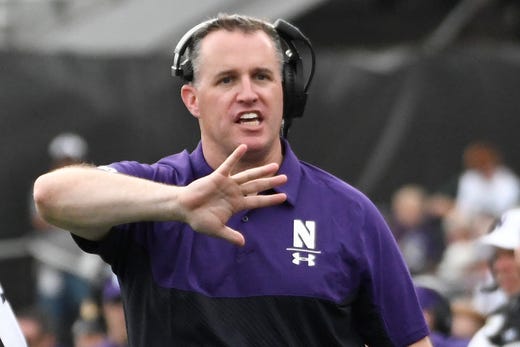 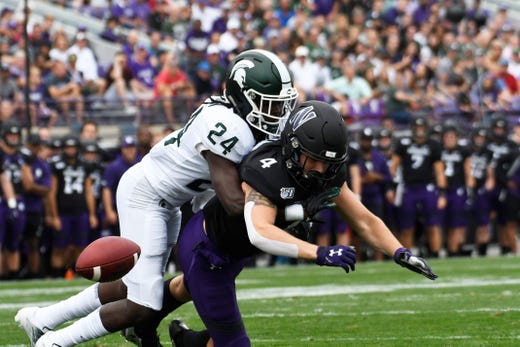 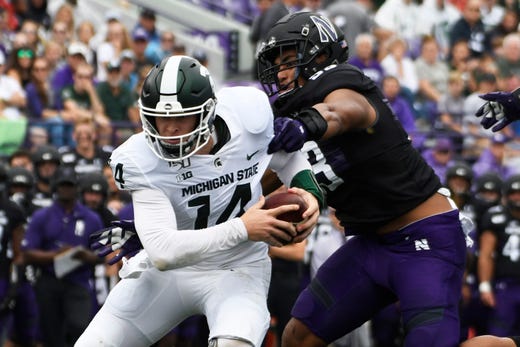 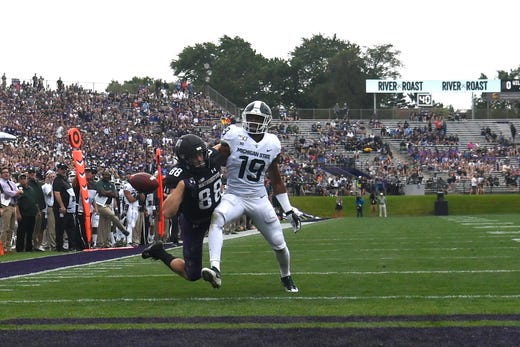 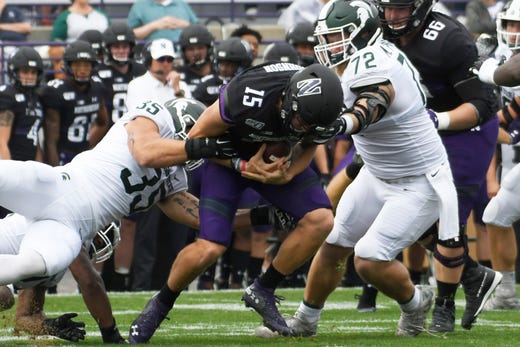 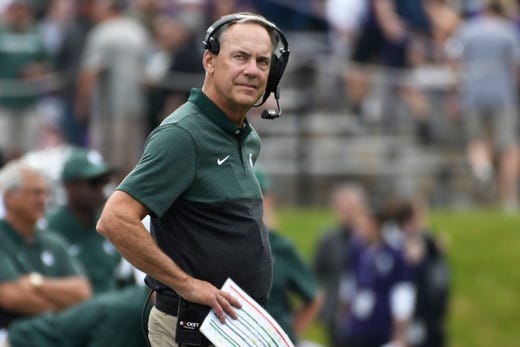 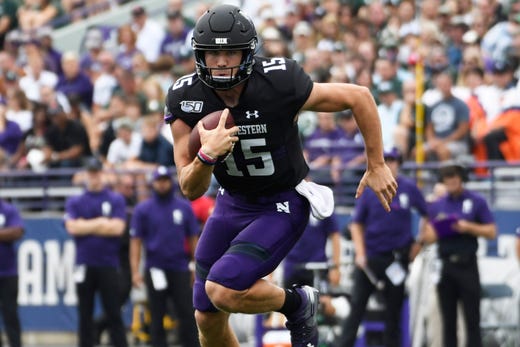 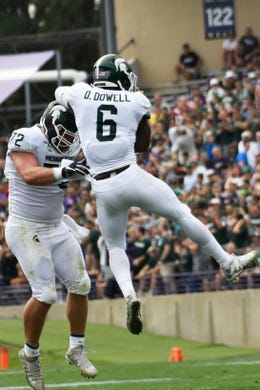 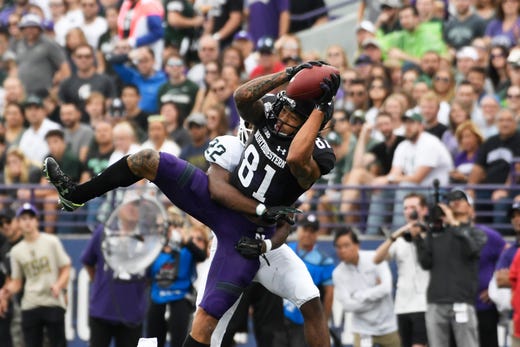 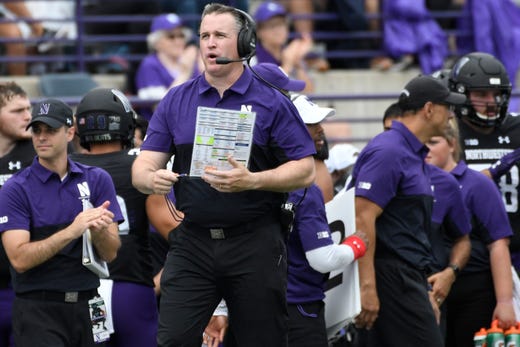 Northwestern head coach Pat Fitzgerald on the sidelines during the first half. David Banks, AP
Fullscreen 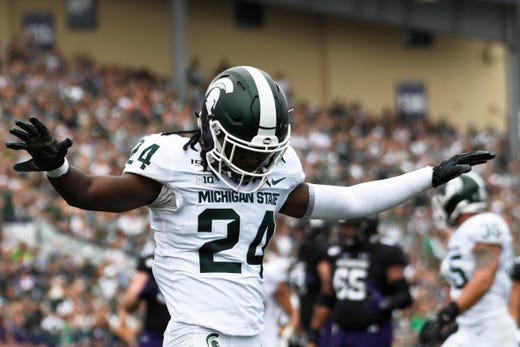 Michigan State cornerback Tre Person (24) gestures after breaking up a pass against Northwestern during the first half. David Banks, AP
Fullscreen 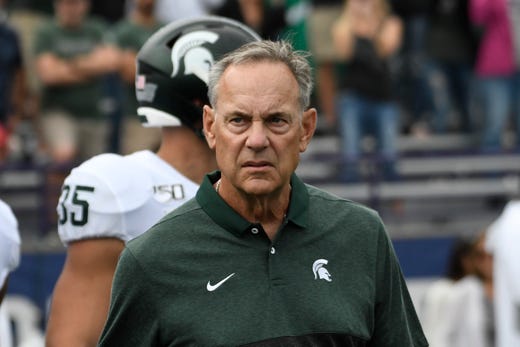 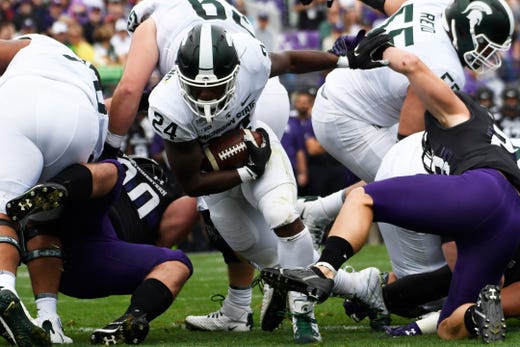 Michigan State running back Elijah Collins (24) runs for a touchdown against Northwestern during the first half. David Banks, AP
Fullscreen 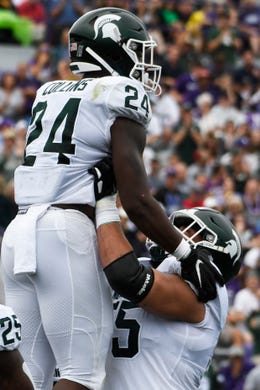 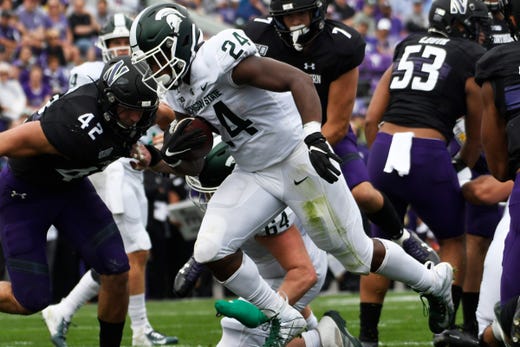 Michigan State running back Elijah Collins (24) runs for a touchdown as Northwestern linebacker Paddy Fisher (42) tries to tackle him during the first half. David Banks, AP
Fullscreen 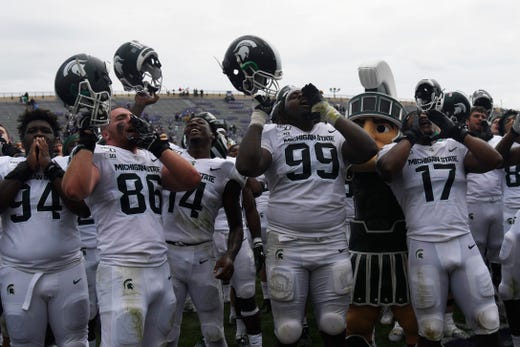 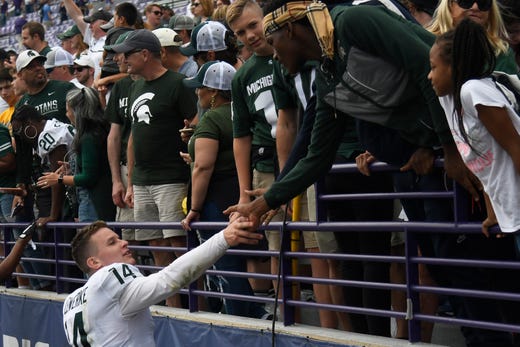 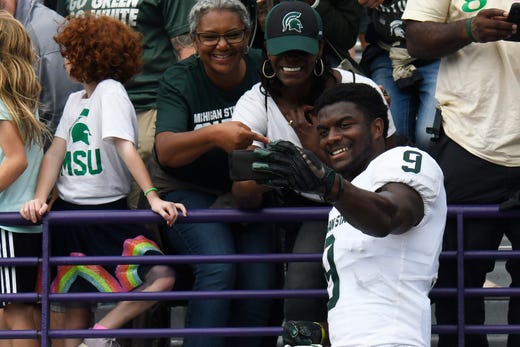 After a disappointing finish to last week’s game against Arizona State, Michigan State gets a fresh start in its Big Ten opener at Northwestern on Saturday at noon. Follow the action here with live updates throughout the game by Matt Schoch of The Detroit News.

One more stop for the defense to cap it off.

Michigan State moved to 3-1 on the season with a road rout of Northwestern in the Big Ten opener.

The Spartans even got some backup freshmen offensive linemen in the action late, including true freshman Devonte Dobbs of Belleville.

Michigan State has its homecoming game next Saturday at Spartan Stadium against Indiana (3-1).

Northwestern is back on the board.

The Wildcats drove 64 yards for a touchdown with the drive culminating in a Drake Anderson 2-yard touchdown run.

Nice bounce back for Lewerke

Michigan State punted it away, but this one is over.

A great stepping stone for a quarterback and offense that needed it.

Another INT for Michigan State defense

Aidan Smith and the Wildcats matriculated the ball down the field some.

But then for the second straight possession, Michigan State got another interception, this time from Joe Bachie on a floater.

The Spartans removed Brian Lewerke as quarterback and have put in Rocky Lombardi.

MSU opening the playbook in rout

Defensive end Drew Beasley had an interception after a tip from Josiah Scott.

Michigan State then attempted to throw a WR pass for Cody White. Nothing was there, but White still ran for 15 yards.

Tight end Matt Seybert later stretched out the ball for a 7-yard touchdown reception, his second of the game.

Aidan Smith now in at quarterback for Northwestern.

Lewerke heating up for Spartans, 24-3

Guess what? Another Northwestern three-and-out.

Brian Lewerke is going strong now, completing his first three passes of the drive, including a nice back shoulder throw to Darrell Stewart Jr. for 27 yards.

Matt Coghlin finally made a field goal after missing four straight. His kick from 26 yards i

I’m glad there was no touchdown there. Get Coghlin out there to get his mojo back.

The Michigan State defense forced two Hunter Johnson incompletions for another three-and-out, getting the ball back after another Matt Coghlin missed field goal.

The run game for Elijah Collins and the passing game for Brian Lewerke then responded, eventually finding tight end Matt Seybert for an 8-yard TD.

Lewerke faked a handoff on the zone read, evaded a sack and found Seybert for the score, putting the Spartans in complete control.

Again, really excellent work from Lewerke. Sliding to avoid the rush while keeping his eyes up and delivering on time and accurately.

Michigan State's defense forced a three-and-out (what else is new), and the offense took over near midfield.

The Spartans picked up a fourth-down conversion as Elijah Collins picked it up easily.

However, they stalled in the red zone as the commentators criticized offensive coordinator Brad Salem for throwing the ball on second-and-5.

Then, kicker Matt Coghlin missed his fourth straight field goal, this one from 40 yards out.

Northwestern takes a knee and goes into the locker room down by two scores.

Brian Lewerke found Cody White for an 11-yard touchdown on a double move on third down.

After a nice completion to White and a short first down pickup by Connor Heyward, Lewerke took a sack.

He then found Darrell Stewart on a 21-yard crossing route to set up the score.

Wildcats get something going, Scott INT

Josiah Scott made a diving interception on the sideline to thwart a Northwestern drive.

Michigan State takes over at the 38.

Malik Washington then picked up a first down over midfield on a nice throw from Johnson.

Before that, another Michigan State drive stalled, as Brian Lewerke throws three incomplete passes on a three-and-out.

Cody White inexplicably tried to catch a line drive punt in traffic, but held on to it as Michigan State takes over after another defensive stop.

Isaiah Bowser broke tackles for a 21-yard run to give Northwestern its best run play of the game.

Nothing notable from Northwestern and Michigan State drives as the teams combine for 2 yards on dueling 3-and-outs.

Northwestern has the ball on its 16 yard-line after a booming Jake Hartbarger punt with the wind at his back.

Darrell Stewart made a nice kickoff return to the 42-yard line to start the drive.

Northwestern has the ball after a touchback on the punt.

Pretty clear so far .. once again, MSU is its own worst enemy

Northwestern on the board in 2nd

Wildcats kicker Charlie Kuhbander played the hook into the wind, floating in a 39-yard field goal.

Northwestern converted a third-and-9 pass from Hunter Johnson, and then another one on third-and-3.

Then, on third-and-12, the Wildcats converted on a pass interference call on Josh Butler to take it into the red zone as the first quarter ended.

After a couple nice Elijah Collins runs, a false start and a sack helped derail another Michigan State drive, and the Spartans punted past midfield in the wind.

Cody White's fumble did not result in points for Northwestern.

Isaiah Bowser ran inside the 1 and the replay upheld the decision that he was stopped short. Joe Bachie then stopped Bowser on first down and he was bottled up again on second. After another stop on third down, Northwestern coach Pat Fitzgerald went for it on fourth, and MSU defensive tackle Mike Panasiuk made the play on fourth down.

Hunter Johnson picked up a third down conversion with a scramble on the drive. Cornerback Josiah Scott aided the Northwestern drive with a pass interference penalty.

Joe Bachie had a sack on Northwestern's first play from scrimmage, forcing a three-and-out.

Cody White then fumbles the punt, giving the Wildcats the ball on the MSU 27.

Brian Lewerke hit his first two throws to Cody White, but then was almost intercepted on his third pass.

He then his tight end Matt Seybert into the red zone, and then snuck for a first down. Lewerke ran for another first down to the 5.

From there, Elijah Collins kept the feet moving for a 5-yard touchdown.

Tyler Higby gets the start at left tackle for the Spartans, replacing the injured Kevin Jarvis.

According to Matt Charboneau on the scene, the Spartans will again be without two of its key offensive linemen, Cole Chewins and AJ Arcuri, in addition to cornerback Shakur Brown.

MSU's Mark Dantonio: Depose me on firing, but not on criminal recruit

Game vs. Northwestern provides a fresh start for Michigan State

Michigan State at Northwestern: View from the other side

Wojo's Pigskin Picks: Time to put up (points) or shut up for Spartans, Wolverines

Michigan State mailbag: What is Mark Dantonio's future with Spartans?