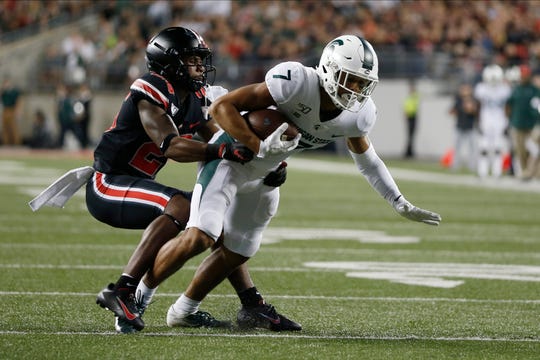 While the quarterback tends to take the blame when an offense is struggling, it’s hard to look at the way Brian Lewerke has been playing and pin all of Michigan State’s offensive woes on him. Yes, he missed a wide-open Cody White in the second quarter for what would have been a Michigan State touchdown, and he did throw his second interception of the season. That play, however, came with the game decided an on a tipped ball. Lewerke has been effective at avoiding the rush, extending plays with his feet and moving the offense between the 20’s.

He’d be the first to say he needs to be better, but he could use some help, too. While Darrell Stewart is having an outstanding senior season, he’s also been the ringleader in the drops department. He had a couple more on Saturday and they came at critical times. He was the first to admit he needs to be more consistent, and if he is and the rest of the receiving corps follows, the numbers for Lewerke will start getting significantly better.

Michigan State’s offensive line went with the same five players for the entire game for the first time this season. It wasn’t exactly out of choice, though, but instead out of necessity. Tackle Cole Chewins still hasn’t played this season, and likely won’t, while tackle AJ Arcuri also has been sidelined. Since the season began, tackle/guard Kevin Jarvis has been knocked out and last week Blake Bueter went down with an injury.

The result is inexperience on the depth chart, with freshmen Devontae Dobbs, J.D. Duplain and Nick Samac a snap away from significant playing time. To this point, the coaching staff has made it clear they’re heading down a redshirt path for each, but another injury or two and things could shift dramatically for a group that hasn’t been healthy for the past two seasons.

Defense gets a reality check

As good as Michigan State’s defense has been the past few years, the loss to Ohio State made it clear how slim the margin for error is against the most talented teams in the Big Ten. One missed fit in a gap by linebacker Joe Bachie led to a 67-yard touchdown run by J.K. Dobbins, a play that on most weeks would have simply gone for a big chunk of yards instead of a score. And when there was a coverage breakdown in the secondary, Justin Fields made the Spartans pay.

Michigan State is still a good defense and, in some ways, next week’s matchup with Wisconsin in a better one for the Spartans. But it’s clear, the Spartans defense isn’t at the championship level many expected it would be before the season. It’s at a high level, just not one that will bring Michigan State a trip to Indianapolis. 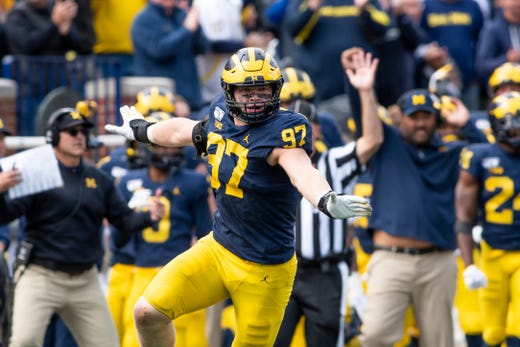 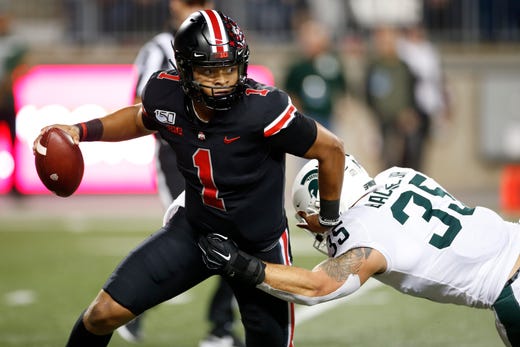 1. Ohio State (6-0, 3-0) – The Buckeyes offense keeps rolling, taking care of Michigan State in arguably its toughest test. Justin Fields continues to frustrate opponents, throwing two touchdown passes while running for another as J.K. Dobbins ran for 172 yards and a touchdown. The defense allowed MSU to move the ball but got after the quarterback, as it has all season, helping the Buckeyes remain the class of the conference. Last week: 1. Jay LaPrete, Associated Press
Fullscreen 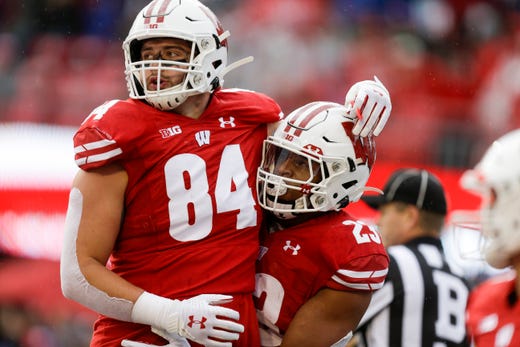 2. Wisconsin (5-0, 2-0) – The Badgers got a bit of a break this week, finishing up non-conference play by beating up on Kent State. Jonathan Taylor scored five touchdowns while the defense pitched another shutout. The Badgers get their next test coming up with a visit from Michigan State as they prepare for their showdown with Ohio State on Oct. 26. Last week: 2. Andy Manis, Associated Press
Fullscreen 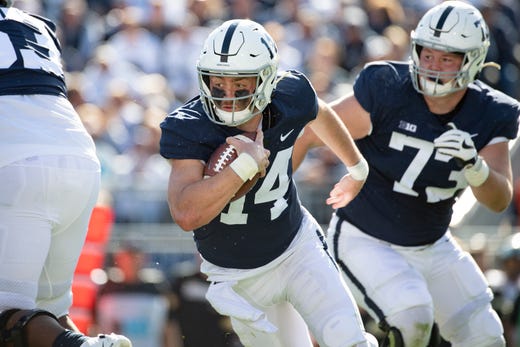 3. Penn State (5-0, 2-0) – The Nittany Lions might be the least talked about undefeated team in the nation. It could be because they haven’t played the toughest schedule in the world, but it’s getting tough to ignore the results. Quarterback Sean Clifford continues to impress while the defense is making life miserable for opposing offenses. The next three weeks get tougher with Iowa, Michigan and Michigan State up next. Last week: 3. Barry Reeger, Associated Press
Fullscreen

4. Michigan (4-1, 2-1) – The Wolverines are still having all sorts of issues putting points on the board, but they managed to keep Iowa out of the end zone this week to remain in the Big Ten East race. They’ll head to Illinois next week before things heat up with a trip to Penn State before Notre Dame comes to the Big House for a rare midseason non-conference matchup. Last week: 6. David Guralnick, Detroit News
Fullscreen 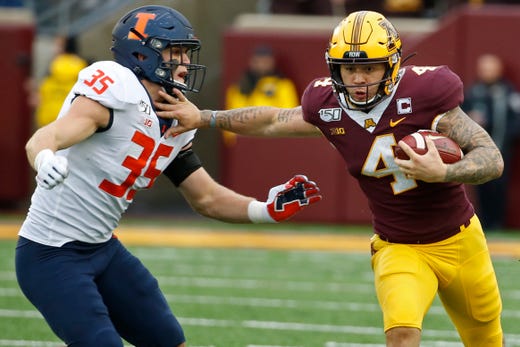 5. Minnesota (5-0, 2-0) – Maybe it’s time to start paying attention to the Golden Gophers. The meat of the schedule is still to come but a visit from Nebraska next week could be the beginning of a tougher road. Rutgers and Maryland are next as the Gophers enjoy a favorable crossover schedule, putting P.J. Fleck’s team in position to compete for the West well into the final weeks of the season. Last week: 7. Bruce Kluckhohn, Associated Press
Fullscreen 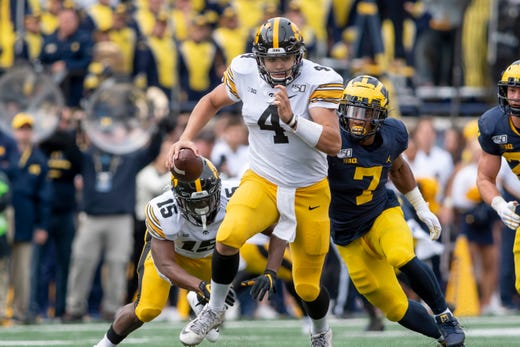 6. Iowa (4-1, 1-1) – The Hawkeyes had their offensive issues exposed in this week’s loss to Michigan, scoring only three points and failing to take advantage after moving the ball into Michigan territory multiple times. The defense continues to play well, which means the Hawkeyes aren’t out of the West race, but the offense will need to rebound at home this week against Penn State. Last week: 4. David Guralnick, Detroit News
Fullscreen 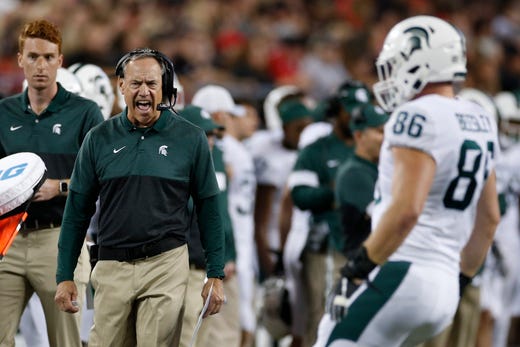 7. Michigan State (4-2, 2-1) – Michigan State headed to Ohio State this week expecting to compete, but a multitude of mistakes on both sides of the ball led to a deflating loss to the Buckeyes. The offense failed to make big plays and the defense was exposed as the schedule continues to be brutal for the Spartans, who head to Wisconsin next week then get a bye before hosting Penn State. Last week: 5. Jay LaPrete, Associated Press
Fullscreen 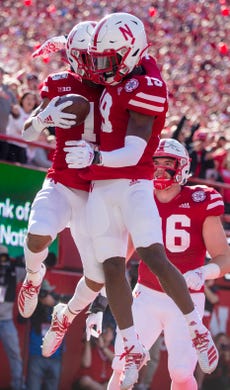 8. Nebraska (4-2, 2-1) – It should surprise no one that the Cornhuskers went down to the wire with Northwestern, considering the recent history of the series. This time the Huskers got the winning field goal as time expired, providing a bounce-back from last week’s blowout loss at home to Ohio State. The Huskers now head to Minnesota in a game that could have plenty of impact on the race in the West. Last week: 9. Emily Haney, Associated Press
Fullscreen 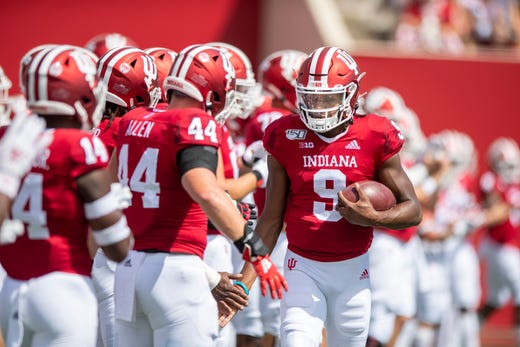 9. Indiana (3-2, 0-2) – The Hoosiers had the week off after losing a close one at Michigan State. They’ll have a chance to get things headed in the right direction with back-to-back games against Rutgers and Maryland in a quest to get in position to become bowl-eligible, a goal that seems perfectly attainable with a young offense that is just scratching the surface. Last week: 8. Doug McSchooler, Associated Press
Fullscreen 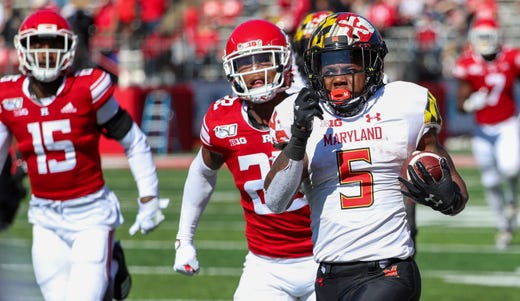 10. Maryland (3-2, 1-1) – The Terrapins got the Rutgers bye this week, beating up on the Scarlet Knights to get back on the winning track. They’ll have a chance to string together a few wins by heading to Purdue next week before hosting Indiana in a battle of East teams still trying to crack into the top half of the Big Ten. Last week: 10. Andrew Mills, Associated Press
Fullscreen

11. Northwestern (1-4, 0-3) – The offensive numbers still aren’t there for the Wildcats but the defense is keeping them in games. That was the case again this week in the loss to Nebraska, proving the record doesn’t truly indicate how tough it is to beat the Wildcats. The road continues to be rough, though, as Ohio State comes to town this week with Iowa on tap the following week. Last week: 11. Francis Gardler, Associated Press
Fullscreen

12. Illinois (2-3, 0-2) – The Fighting Illini were in it early with Minnesota before the Gophers pulled away. Slowing down opposing offenses continues to be a problem for the Illini as they’ve given up 40 or more points in each of the last two games. They’ll be at home the next two weeks but the opponents happen to be Michigan and Wisconsin. Last week: 13. Bruce Kluckhohn, Associated Press
Fullscreen 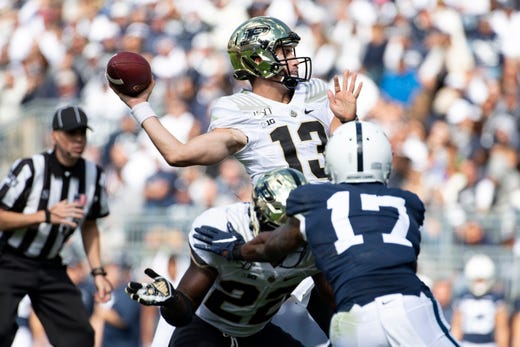 13. Purdue (1-4, 0-2) – The Boilermakers are watching their season quickly spiral out of control and injuries to quarterback Elijah Sindelar and wide receiver Rondale Moore haven’t helped. A visit from Maryland is the next chance to end a three-game skid with a trip to Iowa coming after that as the Boilermakers try to salvage the season. Last week: 12. Barry Reeger, Associated Press
Fullscreen 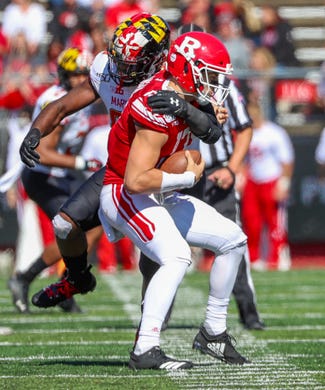 14. Rutgers (1-4, 0-3) – The Scarlet Knights are in a tough spot – their coach was fired last week and they’re essentially playing out the string with more than half the season remaining. The starting quarterback and running back have both asked to redshirt, meaning any chances of things turning around this season seem to be nonexistent. Last week: 14. Andrew Mills, Associated Press
Fullscreen

While the move to get younger still isn’t taking place on the offensive line, there are some moves that show the Spartans are thinking about the future. In the defensive backfield, sophomore Xavier Henderson is already starting at one safety spot, redshirt freshman Kalon Gervin got his first career start at cornerback, taking over for fifth-year senior Josh Butler, and redshirt freshman safety Michael Dowell is seeing more and more time in the "delta" package that includes five defensive backs. Redshirt freshman Jacob Slade is also in the rotation at defensive tackle. Over on offense, redshirt freshman Elijah Collins has become the No. 1 tailback, redshirt freshman tight end Trenton Gillison had a career-best three catches on Saturday, and freshman wide receiver Julian Barnett continues to see his role increase.

It might not mean the Spartans are entirely making a shift to young players, but regardless of how this season plays out, it’s clear the cupboard is not bare for a team that expects to be contending for a conference championship on a yearly basis.

Some tough questions need to be asked when it comes to kicker Matt Coghlin. The junior has been reliable throughout his career, earning first-team All-Big Ten honors last season by going 18-for-22 on field-goal attempts with a long of 49 yards. That came after a solid freshman season when he made 15 of 19 field goals for a Michigan State team that won 10 games. But things have gone off the rails for Coghlin since he made the first seven field goals of the season.

Coghlin missed all three of his attempts in the Week 3 loss to Arizona State, his only make getting wiped out because the Spartans had too many men on the field. He went 3-for-5 in wins over Northwestern and Indiana before nailing his first on Saturday at Ohio State, a 39-yarder in the second quarter. But a 27-yard miss in the second half took the wind out of the Spartans. Mark Dantonio says he doesn’t plan on making a change, but that might need to be re-evaluated if things don’t change.