After catching just 22 passes all of last season, Michigan State's tight ends have collected 28 through six games this season.

For years, including the bulk of the Mark Dantonio era, the tight end was a major part of the Spartans’ offense. But over the past few seasons, the production from the tight ends has fallen off significantly. 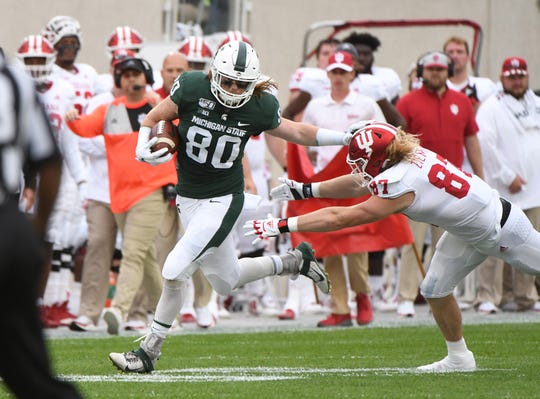 Things are starting to come back around, though. After six games, it’s clear the tight end matters again at Michigan State, even as Dotson has battled an injury the past few weeks. While the junior has 11 catches for 96 yards and a touchdown, fifth-year senior Matt Seybert has emerged with 13 grabs for 170 yards and three scores, while redshirt freshman Trenton Gillison has seen his role increase dramatically, pulling in a career-best three catches last week against Ohio State.

They’re all involved, but it’s Gillison that might be the most intriguing.

As good of a story as Seybert has been — the former walk-on who gave up a scholarship at Buffalo to transfer to Michigan State back in 2016 has persevered to become the leading receiver among the tight ends — it’s Gillison who looks like he could blossom into a true star.

At 6-foot-4 and 249 pounds, Gillison could prove to be a matchup problem for most defenses. He has the size and strength to hold his own along the offensive line, but also possesses the athleticism that had Michigan State baseball coach Jake Boss pushing for Gillison to be a two-sport athlete for the Spartans.

Gillison was open to the idea, but by last spring, after he’d gotten his feet wet in two games as a true freshman, he opted to keep his focus solely on the football field. It appears that move is paying off.

“Trent is a young player and he’s coming,” Dantonio said. “He caught the ball very well last week. Said all along, he's an athletic guy and can catch the ball. He's shown toughness and he's active. He needs game experience like a lot of players, and I think he gets better and better.”

A four-star prospect out of Pickerington (Ohio) Central, Gillison relished the chance to play back in his home state last weekend.

“Columbus is a great atmosphere and everything,” Gillison said. “It was really good, just coming back home and just trying to contribute to the team.”

His contribution should continue to increase. After recording his first career reception the week before against Indiana, Gillison’s three grabs last week were the most for the tight ends.

But Gillison is quick to point out it’s not just about him, saying an offseason focus on increasing the production from the tight end spot has been vital so far.

“Last year we knew that the big hole was the tight end group,” Gillison said. “We just took that as a big chip on our shoulder, just to make sure that no matter who goes in, that we’ll be able to get the job done.”

Entering this week’s matchup with No. 8 Wisconsin, the trio of Spartans tight ends already have surpassed last year’s group in production. They have 28 receptions for 312 yards and four touchdowns.

While the next step for Gillison is to find the end zone, it seems clear at this point that quarterback Brian Lewerke is looking for his tight ends and isn’t afraid to throw them the ball.

“Through fall camp and spring ball we earned a lot of trust from our quarterbacks,” Seybert said, “just trying to show that consistency from the tight end room that you can rely on us. I think that’s the biggest thing, is just trust throughout the whole offense and knowledge of the game has improved.”