Weston Bridges carried the ball 16 times for 53 yards in six games last season before being moved to wide receiver this season in preseason camp. 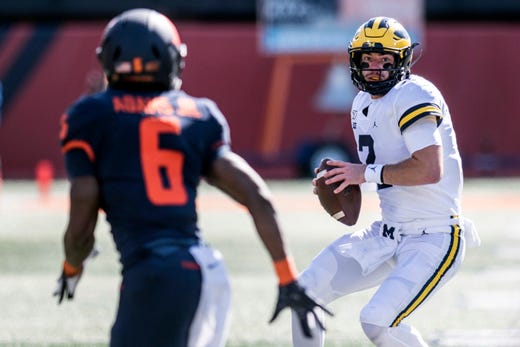 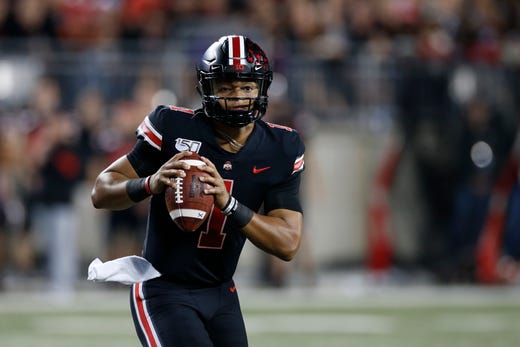 1. Ohio State (6-0, 3-0) – The Buckeyes took the week off after rolling over Michigan State last week and now get set to head to Northwestern before the showdown with Wisconsin on Oct. 26. Both teams have been dominant to this point in the season and it doesn’t appear there’s a team in the East that will be able to knock off the Buckeyes. Last week: 1. Jay LaPrete, AP
Fullscreen 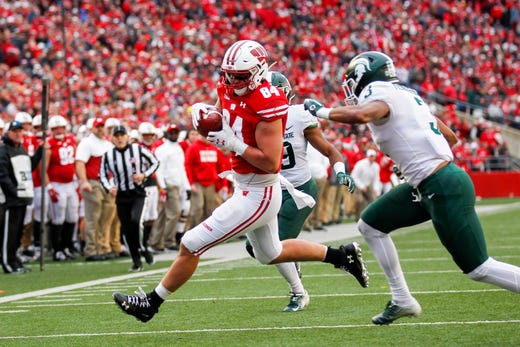 2. Wisconsin (6-0, 3-0) – The Badgers just keep on rolling and this time they didn’t even need a huge game from Jonathan Taylor. The junior RB scored twice but ran for just 80 yards against Michigan State, but the Badgers hardly needed more as the crushed the Spartans, pitching a shutout. The Badgers go to Illinois next week before traveling to Ohio State in two weeks. Last week: 2. Andy Manis, AP
Fullscreen 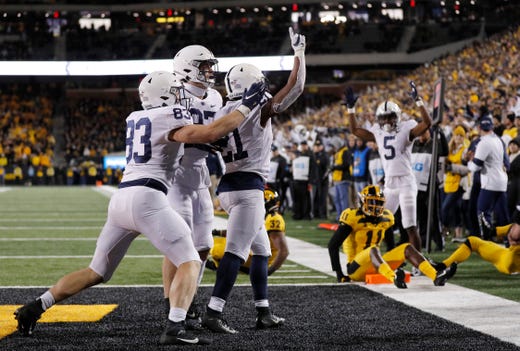 3. Penn State (6-0, 3-0) – The Nittany Lions aren’t cruising past opponents like Ohio State and Wisconsin, but they’re unbeaten nonetheless thanks to another hard-fought win, this time on the road against Iowa. It was the first win this season over a ranked opponent as the Nittany Lions continue to navigate a tough schedule that includes Michigan, Michigan State and Minnesota over the next few weeks. Last week: 3. Matthew Putney, AP
Fullscreen 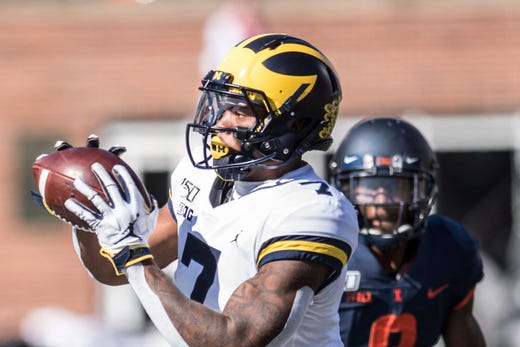 4. Michigan (5-1, 3-1) – The Wolverines still haven’t been dominant, and when they found themselves up only three points late at Illinois, they made the plays needed to pull away and avoid the upset. The schedule won’t give the Wolverines many breaks from here as they head to Penn State next week before hosting Notre Dame as they try and keep pace in the top-heavy Big Ten East. Last week: 4. Holly Hart, AP
Fullscreen 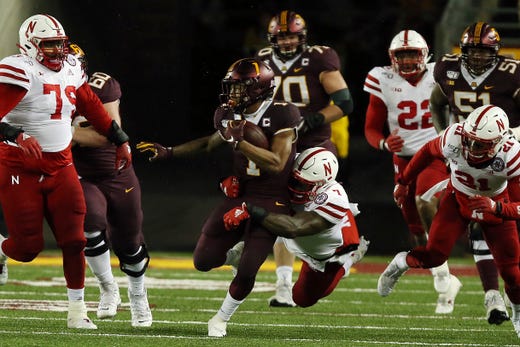 5. Minnesota (6-0, 3-0) – The Golden Gophers still aren’t getting much attention, but after dismantling Nebraska at home they’re still unbeaten and tied atop the West with Wisconsin after Rodney Smith ran for 139 yards and a touchdown. They get another cupcake next week by heading to Rutgers with a chance to keep the pressure on the Badgers, the team they’ll face in the final game of the regular season. Last week: 5. Stacy Bengs, AP
Fullscreen 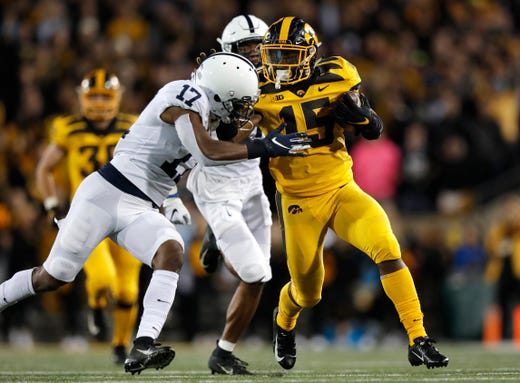 6. Iowa (4-2, 1-2) – The offensive woes continued for the Hawkeyes, who hosted Penn State in primetime but managed only one offensive touchdown and lost for the second straight week. The defense was tough to score on, as it has been all season, but the inability to move the ball consistently once again did in the Hawkeyes, who have now fallen two games off the pace in the West. Last week: 6. Matthew Putney, AP
Fullscreen 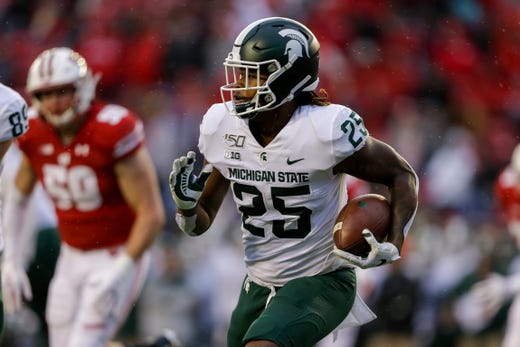 7. Michigan State (4-3, 2-2) – The Spartans faced a top-10 team for the second straight week, and just like they did last week at Ohio State, they got run off the field, getting shut out for only the second time under coach Mark Dantonio. The offense again was inept while the defense has now gotten destroyed two straight weeks, giving up 222 yards rushing to the Badgers despite holding Jonathan Taylor to 80 yards. MSU gets a bye next week before hosting Penn State. Last week: 7. Andy Manis, AP
Fullscreen 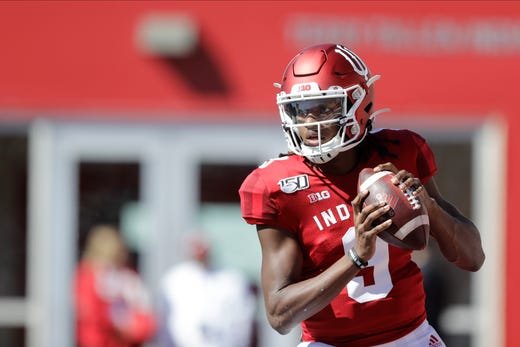 8. Indiana (4-2, 1-2) – The Hoosiers won the Rutgers lottery this week, getting the nearly automatic win that comes with facing the Scarlet Knights. QB Michael Penix three for 282 yards and three touchdowns while Stevie Scott gained 164 yards on the ground. The Hoosiers head to Maryland next week with a chance to get a second straight win and move closer to bowl eligibility. Last week: 9. Darron Cummings, AP
Fullscreen 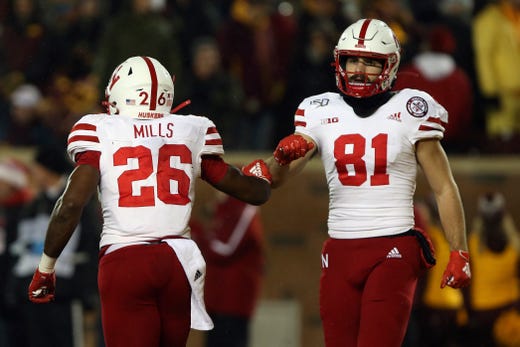 9. Nebraska (4-3, 2-2) – The Cornhuskers were without QB Adrian Martinez and the offense suffered because of it in a blowout loss at Minnesota. While the Huskers managed 299 total yards, they allowed 450 while the Gophers ran for 322. The status of Martinez will be critical moving forward as the Huskers have a bye week before hosting Indiana in two weeks. Last week: 8. Stacy Bengs, AP
Fullscreen

10. Maryland (3-3, 1-2) – The fast start to the season when the Terrapins scored 142 points in the first two games seems like a distant memory as the Terps have lost three of four, including getting dominated on the road against a struggling Purdue team. While the offense has ground to a halt, the Terps’ defense hasn’t shown the ability to stop anyone as they get set to host Indiana next week. Last week: 10. Michael Conroy, AP
Fullscreen

11. Purdue (2-4, 1-2) – The Boilermakers shifted some starters along the offensive line this week leading the offense finally getting going as QB Jack Plummer threw for 420 yards and three touchdowns in the win over Maryland. The win provides at least a bit of momentum for the Boilermakers as they head to Iowa next week trying to keep their postseason hopes alive. Last week: 13. Michael Conroy, AP
Fullscreen 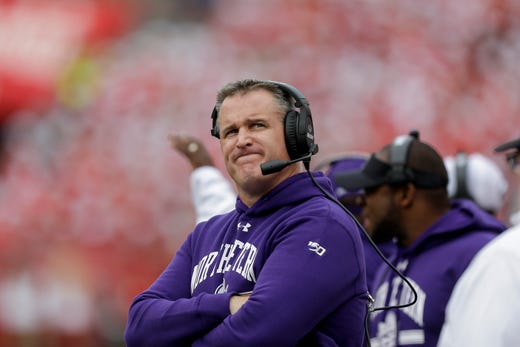 12. Northwestern (1-4, 0-3) – It was an off week for the Wildcats, who have lost three in a row and could be on the verge of their season really getting out of control as they host Ohio State next week. They’ve been in most games they’ve played this season, but the offense has still lagged far behind the defense and it will need to make a big jump if the Cats expect to be in a bowl game. Last week: 11. Andy Manis, AP
Fullscreen 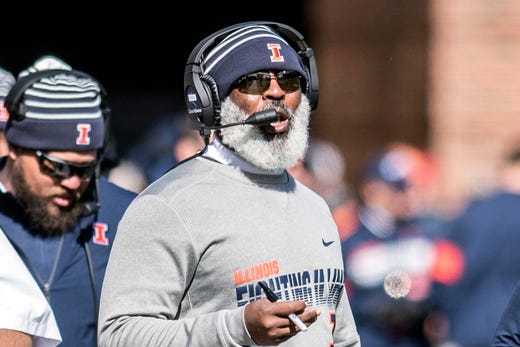 13. Illinois (2-4, 0-3) – Some credit goes to the Fighting Illini for not folding when down by three touchdowns in the second half. They battled back and got to within three of Michigan in the fourth quarter but couldn’t get a stop, then turned the ball over to put the game away. There are no breaks as Wisconsin is next as the Illini try to snap a four-game skid. Last week: 12. Holly Hart, AP
Fullscreen 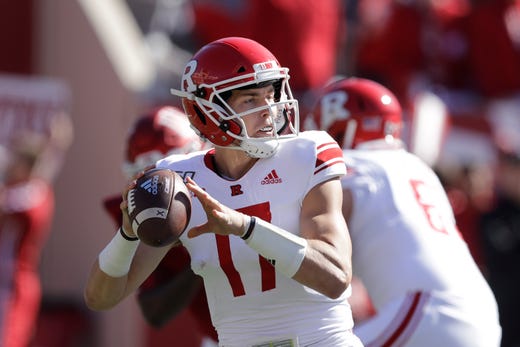 14. Rutgers (1-5, 0-4) – It’s hard to find much positive for the Scarlet Knights these days as they were shut out for the third time this season in the loss to Indiana. With an interim coach overseeing things, the Knights have shown little fight, something that will be difficult to change next week against Minnesota. The only shot at another win likely comes in two weeks against Liberty. Last week: 14. Darron Cummings, AP
Fullscreen

East Lansing — In what is starting to become a weekly process, another Michigan State player has entered the NCAA transfer portal.

Sophomore Weston Bridges confirmed to The News on Monday that he has entered the portal, and will transfer to another school. Bridges becomes the fourth Spartan to enter the portal this season, following linebacker Brandon Bouyer-Randle and running backs Connor Heyward and La’Darius Jefferson. 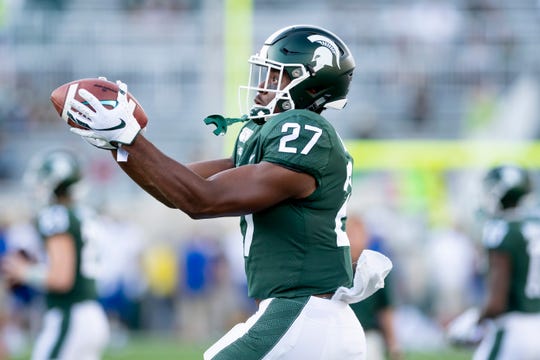 Bridges later tweeted he was "excited for the next chapter," which drew support from Heyward on social media.

"My brother for life," Heyward tweeted. "A lot of people don't understand but you know you have to do what's best for you. They gone miss us if they haven't already. It's a marathon not a sprint."

My brother for life.. A lot of people don’t understand but you know you have to do what’s best for you. They gone miss us if they haven’t already.. It’s a marathon, not a sprint ❤️🤞 https://t.co/LVUgYYUxHq

A three-star running back out of Akron, Ohio, the 5-foot-11, 208-pound Bridges suffered a torn ACL in his left knee as a senior in high school and then tore the same ACL during preseason camp as a freshman. He carried the ball 16 times for 53 yards in six games last season before being moved to wide receiver this season in preseason camp.

Bridges did not play in any of Michigan State’s first seven games and was not with the team on Sept. 28 when it played at home against Indiana.

“Weston has got sort of a team rules type thing — a minor thing,” Michigan State coach Mark Dantonio said after that game. “He had to be off the sideline for this game, just to be consistent.”

Players who have entered the portal, which was implemented last year by the NCAA, can be contacted by coaches from other programs. The players, though, can remain at their current school while their name is in the portal and it does not mean that player can’t remain at his original institution.