Just three games into the basketball season, Michigan State already has experienced its share of ups and downs. 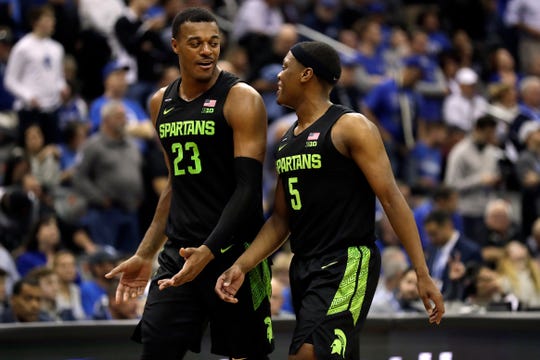 East Lansing — Just three games into the basketball season, Michigan State already has experienced its share of ups and downs.

The emotional roller coaster started just a couple of weeks before the season began as the Spartans learned they’d be without senior guard Joshua Langford until at least January as he continued to work back from the broken foot that cost him all but 13 games last season.

It continued with the close loss to Kentucky in the Champions Classic, a 1 vs. 2 matchup to open the season that gave the Spartans their fourth straight loss in the marquee event. And before Michigan State could get back on the court, the Spartans were sent reeling by the death of Zachary Winston, the 19-year-old brother of star guard Cassius Winston and a close friend of many on the team.

However, the schedule offers few breaks. And at Michigan State, that meant another high-profile game against another ranked opponent on Thursday with a trip to Newark, N.J., to take on No. 12 Seton Hall. Even as the Spartans battled foul trouble, the immense size of the Pirates and Aaron Henry rolling both ankles on one play, they managed to overcome 37 points from Seton Hall’s Myles Powell and pull out a 76-73 win in a hostile environment.

“I don't know what I learned about my team except that I said we have a bunch of good guys and they stay connected,” Michigan State coach Tom Izzo said. “I thought last year we weren't the most together team, but we were the most connected team.”

The way the third-ranked Spartans (2-1) rallied on Thursday proves that connection continues to exist this season, as Charleston Southern visits the Breslin Center for a 6:30 p.m. tip-off on Monday as part of the Maui Invitational.

The connection is there, as the Spartans didn’t fold when Winston battled early foul trouble, Xavier Tillman had a tough time with Seton Hall’s big men and Henry was limited. It led to opportunity for freshman Malik Hall, who responded by scoring all 17 of his points in the second half while freshman Rocket Watts made some timely buckets, including a 3 from the wing with Michigan State trailing by five late, as well as a dish to Winston for a 3-pointer that put the Spartans in front in the final minute.

“It’s what we’re all about,” Henry said. “I was put in this position last year and I feel like I tried to step up. I did in some ways last year and this is the same thing I'm seeing reoccurring, and I'm just happy for Malik and his success as a freshman. I know it's rare to come in like this, and the better he is for us the more dangerous we become.”

Perfect the performance was not, but there’s plenty of time to iron out some of the kinks. After Michigan State plays Charleston Southern on Monday, it will have a week off before resuming action next Monday against Virginia Tech in Maui. Two more games follow with Georgia or Dayton and perhaps another marquee matchup with Kansas in the final game of the tournament.

“We’ve got our problems yet,” Izzo said. “We're not a finished product, but we've been dealing with a lot. We’re still dealing with Langford’s absence, and now we're dealing with something that's bigger than life.”

Meanwhile, Michigan State will be glad to welcome Charleston Southern (1-3), a team that has been blown out in three straight games. The most recent defeat came on Saturday at Dayton, and the Buccaneers must now make the quick turnaround against one of the best teams in the country.

They’ll be counting on sophomore guard Dontrell Shuler, who is averaging 20 points a game, as well as junior guard Phlandrous Fleming Jr., an All-Big South preseason first-teamer that is averaging 10.3 points and eight rebounds a game.

“We’ve got to keep working,” Charleston Southern coach Barclay Radebaugh said after an 91-47 loss to Furman last week. “When things don’t go well how much character do we have? It’s a great time to learn about character when things are a little sideways and it’s not going exactly your way.”

Charleston Southern at No. 3 Michigan State

► Outlook: This is campus game for the Maui Invitational. Michigan State travels to Hawaii next week where it will face Virginia Tech in the opening game. … This is the first meeting between MSU and Charleston Southern. … At No. 3, MSU is the highest-ranked opponent Charleston Southern has faced in program history. The Bucs have played six other current Big Ten schools, including a 2009 meeting with Maryland when the Terrapins were in the ACC.