While Dantonio said he plans to be back next season as MSU’s head coach, the future of his assistants won’t be clear for some time. 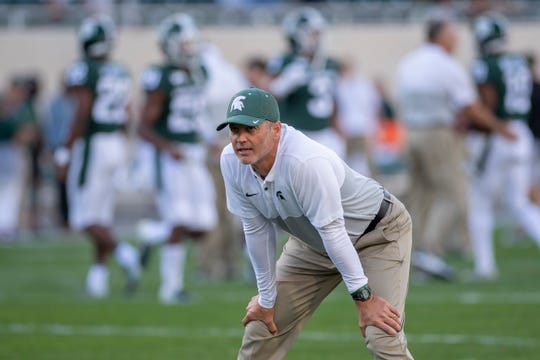 East Lansing — While Mark Dantonio said on Tuesday he plans to be back next season as Michigan State’s head coach, the future of his assistants won’t be clear for some time.

In the midst of a five-game skid and another frustrating season, Dantonio, in his 13th year leading the Spartans, said he fully intends to remain the head coach, saying, “I don’t think I’m finished.”

That might not be the case for at least some of his assistants.

“I don't make decisions on that until I weigh out everything the best that I can,” Dantonio said. “Probably I have the most knowledge in terms of what's going on within our football team as to who did what in terms of was that a player (issue), structure, coaching, officiating, all the underlying things that go along with that.

“I think that I've tried to figure out what worked, what didn't work, how to critique it, what was in control, out of our control, how do I evaluate that. I've always made those decisions after the fact. That's what I'll continue to do to the best of my ability.”

All of the assistants’ contracts are rolling deals and will automatically extend for another season on April 1 each year. However, if the university notifies the coaches between the end of the season and March 15 they will not be retained, the contracts expire.

Most of coaching questions seem to surround the offensive staff, one Dantonio opted to simply reshuffle last summer. It was an odd move, simply moving pieces around instead of making significant changes as Salem went from quarterbacks coach to coordinator. Ten games into the season, it’s a move that hasn’t paid off as Michigan State ranks 110th in the nation in scoring offense (21.8 points), 107th in total offense (351.3 yards) and 114th in rushing offense (123.2 yards).

Defensively, things have started to crumble, as well. Normally one of the best units in the country, the Spartans remain solid against the run but aren’t getting after the quarterback and are allowing big play after big play, including late in a pair of close losses to Arizona State and Illinois.

It’s left the largest level of uncertainty in the Michigan State staff since Dantonio took over in 2007, though Dantonio believes he’s the guy to get it back on track, regardless of who the assistants are.

The current assistants say their only focus now is on beating Rutgers.

“I think you kind of live in a cave a little bit as a coach,” Salem said, “so you’re really worried about Rutgers. It’s just getting ourselves back on a winning track. It’s been a while and I think it’s hard emotionally for players and coaches, so you just want to get ourselves back on a positive track.” 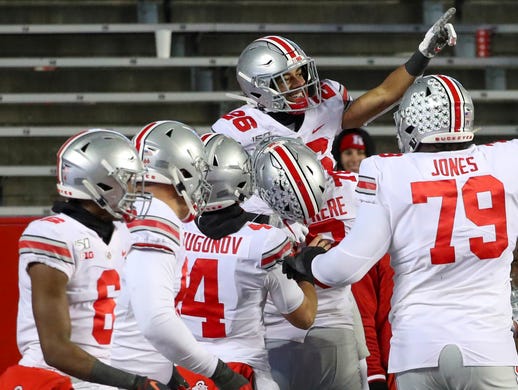 1. Ohio State (10-0, 7-0) – The Buckeyes took care of business in their final tune-up before closing out the season with two of their biggest games. Getting past Rutgers wasn’t exactly the biggest test and the Buckeyes made quick work of the East’s worst team. Now they get set to prove they’re the elite team in the division as Ohio State closes the season by hosting Penn State next week before travelling to Michigan in two weeks. Last week: 1. Andrew Mills, AP
Fullscreen

2. Wisconsin (8-2, 5-2) – When all else fails, there’s always Jonathan Taylor to fall back on. That’s the luxury the Badgers have and they leaned on it once again in a victory at Nebraska, as the junior running back went over the 200-yard mark again, gaining 204 yards on the ground. The Badgers now get set to host Purdue before their showdown with Minnesota in the season finale. Last week: 3. Nati Harnik, AP
Fullscreen 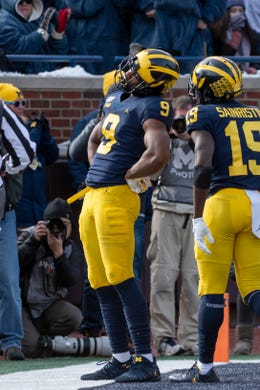 3. Michigan (8-2, 5-2) – There’s a chance the Wolverines are actually the second-best team in the conference but you can’t just throw away that dud at Wisconsin earlier this year. Still, the Wolverines are rolling after beating up on their hapless rival up the street as QB Shea Patterson threw for 384 yards in the victory over Michigan State. All that’s left before the Ohio State game is a trip to Indiana next week, one that will be far from easy. Last week: 4. David Guralnick, Detroit News
Fullscreen
4. Minnesota (9-1, 6-1) – Are we being a bit harsh dropping the Golden Gophers this far? Perhaps, but the loss on the road to Iowa was proof that, even in the midst of a great year, the Gophers aren’t quite there yet. Now, that could all change in a couple of weeks with the showdown against Wisconsin, a game likely to determine the West. Get past Northwestern next week and get a win over the Badgers and we’ll be all-in on P.J. Fleck and the Gophers. Last week: 2. Aaron Lavinsky, TNS
Fullscreen 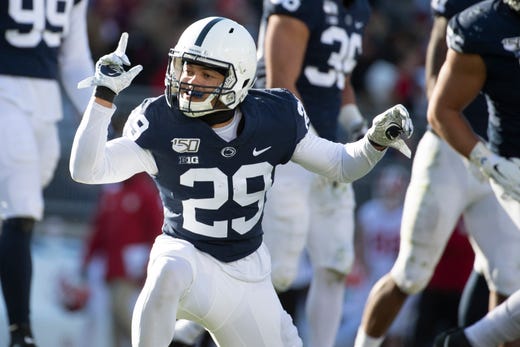 5. Penn State (9-1, 6-1) – The Nittany Lions are perhaps the most ordinary one-loss team in the country, meaning, they are creating little buzz. It’s odd considering the win at home this week over Indiana was no piece of cake and the Nittany Lions still have a shot at winning the East heading into Columbus next week. Upset the Buckeyes and it’s Penn State that would likely end up in Indy. Last week: 5. Barry Reeger, AP
Fullscreen 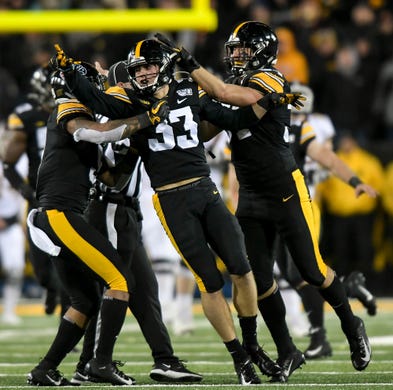 6. Iowa (7-3, 4-3) – The win at home over Minnesota likely just accentuates the frustration for a team that has lost three games by a total of 14 points. Those defeats knocked the Hawkeyes from contention in the West but it didn’t mean they’re not capable of playing with the conference’s best. That much was clear this week as the Hawkeyes head to the final two weeks of the season against Illinois and Nebraska. Last week: 7. Aaron Lavinsky, TNS
Fullscreen 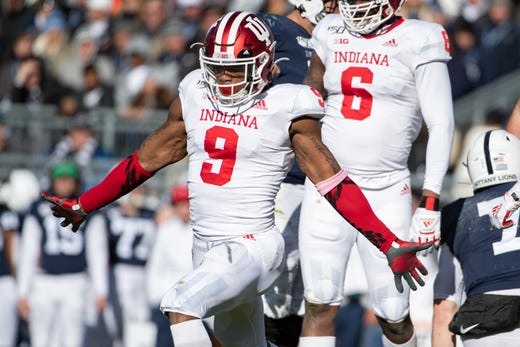 7. Indiana (7-3, 4-3) – The Hoosiers are clearly no longer a pushover in the East, proving that as much in this week’s loss at Penn State perhaps more than any of the four straight wins they had entering the game. Beating up on the likes of Maryland and Rutgers is one thing, but the Hoosiers were right there against one-loss Penn State. They didn’t get it done, but it’s clear the program is headed in the right direction. Last week: 8. Barry Reeger, AP
Fullscreen 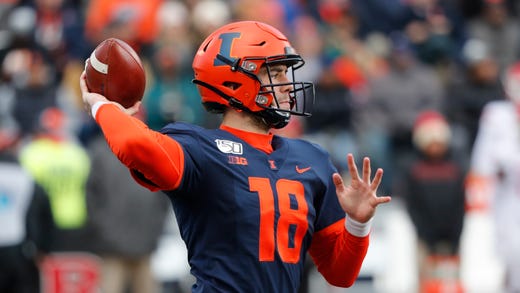 8. Illinois (6-4, 4-3) – The Fighting Illini got to bask in their bowl-clinching win last week at Michigan State by taking their final bye week. Now the Illini look to improve that bowl position, beginning next week with a difficult trip to Iowa. After that, it’s a home date with Northwestern and a good shot at closing the regular season with a victory. Last week: 6. Charles Rex Arbogast, AP
Fullscreen 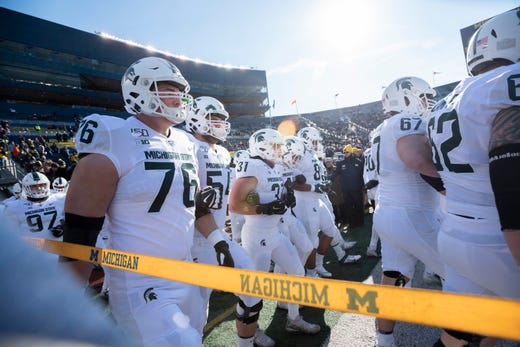 9. Michigan State (4-6, 2-5) – The blowout loss this week at Michigan is clearly the low point of a season full of them. Not being competitive against Ohio state, Wisconsin and Penn State is one thing, but getting humbled by your rival is another. The Spartans close the season with a trip next week to Rutgers and a home date with Maryland, two games it must win just to get to a bowl game. That’s a far cry from what was expected of this team before the season began. Last week: 9. David Guralnick, Detroit News
Fullscreen 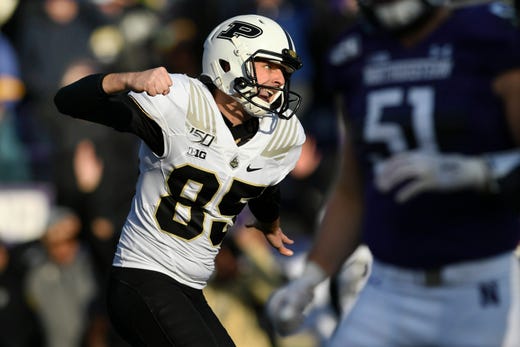 10. Purdue (4-6, 3-4) – After winning two straight, the Boilermakers had their final week off as they try to close with a flurry and reach a bowl game. It would require an upset next week at Wisconsin followed by a win at home against Indiana to pull it off, something that doesn’t seem likely, especially considering the injuries the Boilermakers have dealt with. Last week: 10. Paul Beaty, AP
Fullscreen 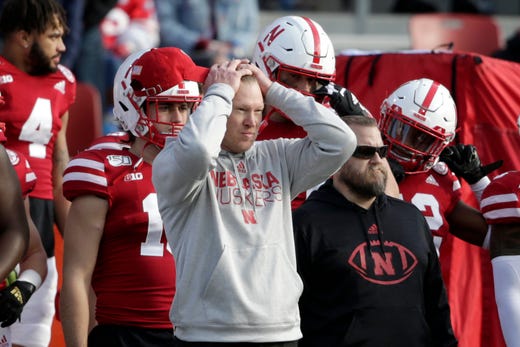 11. Nebraska (4-6, 2-5) – The loss this week to Wisconsin was the fourth straight for the Cornhuskers, meaning the Huskers will need to win their final two to become bowl eligible. A win next at Maryland is possible, but closing with a victory at home over Iowa might be tough for a team many picked before the season to win the West. Last week: 11. Nati Harnik, AP
Fullscreen 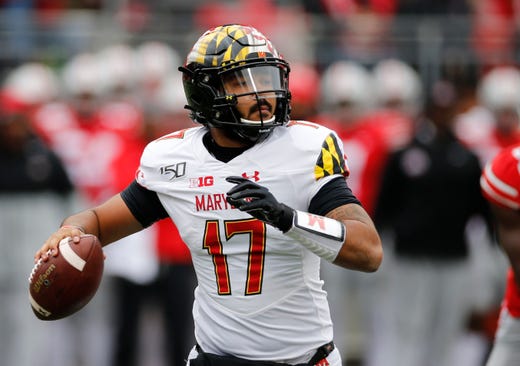 12. Maryland (3-7, 1-6) – The only thing that kept the Terrapins from watching their five-game skid grow to six was the fact they had their final bye this week. Trying to scratch together some sort of momentum heading into the offseason resumes next week with a visit from Nebraska followed by a trip to Michigan State, two winnable games but hardly guaranteed victories. Last week: 12. Jay LaPrete, AP
Fullscreen 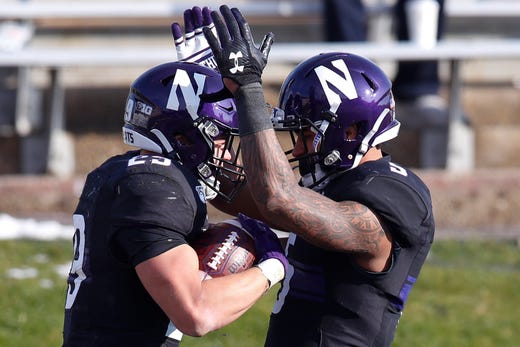 13. Northwestern (2-8, 0-7) – Forget that the Wildcats were hosting UMass this week and just focus on the fact the Cats snapped a seven-game losing streak. Freshman running back Evan Hull ran for 220 yards and four touchdowns to provide at least some relief to the Wildcats’ miserable season. They’ll get a chance to play spoiler next week when they host Minnesota before closing the season at Illinois. Last week: 13. Jim Young, AP
Fullscreen 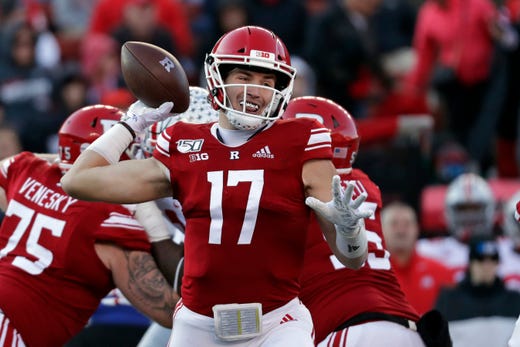 14. Rutgers (2-8, 0-7) – Consider it a small victory but the Scarlet Knights kept Ohio State from covering a huge point spread this week and managed to put 21 points on the board. They’ll try and build some momentum from there as a reeling Michigan State team comes to town next week, followed by a trip to Penn State to close the season. Last week: 14. Adam Hunger, AP
Fullscreen

Even with a fuzzy future, the belief is everyone is on the same page. That’s what Tressel talked about when he referenced an interview with linebacker Antjuan Simmons after the Michigan loss, saying there is no doubt in the leadership of the program.

“There was zero hesitation,” Tressel said. “He snapped back, ‘Yes, I absolutely believe in this program, in Coach Dantonio and everyone in it.’ That’s how we feel. There’s no doubt, that’s how we feel.

“But right now today, what we need to do is make sure we play above our potential. That’s what we’ve always said. If we do that, we will A, be happy, and B, be good. So that’s what the focus is now.”

Sophomore wide receiver Jalen Nailor was back in uniform last week against Michigan but did not play. He’s been out since suffering a leg injury between the first and second games of the season.

However, Dantonio expects the speedy receiver to play Saturday at Rutgers.

“Jalen could have possibly played some, but he hadn't practiced,” Dantonio said. “He really only practiced on Thursday. He hadn't been hit, jostled around. Ball security, those type of things. Wanted to give an extra week to get his feet on the ground. But he'll play. He practiced yesterday. He'll play in this football game.”

With only one game played, Dantonio also said it’s possible Nailor could use this season as a redshirt.

Junior cornerback Josiah Scott was injured on the second play from scrimmage last week at Michigan but was listed as the starter this week on the depth chart. Tressel confirmed he expected Scott to play this week.

… Junior defensive end Jacub Panasiuk can play after getting ejected in the second half last week when he hit Michigan quarterback Shea Patterson late, but that doesn’t guarantee his playing time.

“Based on the rules he’s able to play,” Tressel said. “Whether he’s in there at the get-go, that’s up to Coach Dantonio.”