Michigan State fifth-year senior quarterback Brian Lewerke admitted some of the little things are starting to resonate in his head.

East Lansing — Michigan State fifth-year senior quarterback Brian Lewerke admitted some of the little things are starting to resonate in his head. 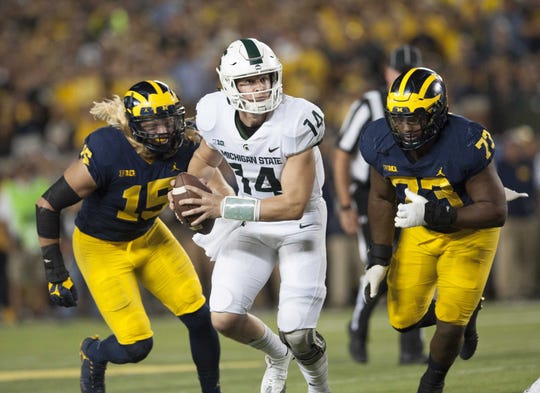 But as for a full reflection of his journey and his career? That likely won’t occur until after the curtain finally comes down on Michigan State’s 2019 campaign.

“I'll do that right after once it's all done and finished,” Lewerke said. “For now, I'm focused on what we've still got in front of us.”

That’s because what Michigan State (5-6, 3-5 Big Ten) has is an opportunity to extend its season for another few weeks and secure a bowl bid for the third straight season when it hosts Maryland (3-8, 1-7).

So, while there’s motivation from the younger Spartans to help provide a triumphant send-off on Senior Day, it’s also a rallying point for the veterans to leave Michigan State in the best shape possible, like when they first arrived.

“Obviously this program expects more than what we've done this year," Lewerke said, "but it'd be a step in the right direction.

“I think a bowl game would be big for this program. That's the standard is to make a bowl game, for sure. It would be good for the young guys and to send the senior class out right with a bowl game and hopefully a bowl win, too.”

Like Lewerke, senior defensive end Kenny Willekes and senior safety David Dowell said they won't start looking back at their time as a Spartan anytime before Saturday because there’s still business to tend to. But the fact it’s the final home game of their careers will certainly start to sink in when the team’s 21 seniors are honored in a pregame ceremony.

Dowell said he expects it to be an emotional moment when all the ups and downs, cheers and tears, and successes and shortcomings he has experienced since 2015 will run through his head.

There’s the forgettable 3-9 season in 2016 that marked the worst season of coach Mark Dantonio's 13-year tenure. There's the 10-win campaign — the program's sixth season with double-digit wins this decade — where the Spartans were ranked as high as No. 13 in the nation and capped the year with a dominant Holiday Bowl win in 2017. Then there's last year, when Michigan State didn't live up to its preseason No. 11 ranking and closed out 2018 with three losses in its final four games.

For that reason, Willekes said he’ll always remember the senior class for its resiliency and bond that was forged through years of adversity.

“When a team doesn't win and when things don't go the way you want it to, there could be a rift on the team. There could be a divide, people start doing their own thing,” Willekes said. “I think through all the adversity, the losses have brought this team closer. Everyone continues to come in each and every day and work hard.

“I've seen things like the 3-9 year when we started losing there was dissension between the team. People stop showing up on time, start missing stuff, skipping stuff. You see with this team, the more games we lost, the more people tried to work harder to get back on track. I'll forever be grateful for these guys because I appreciate that about them.”

Dantonio said he’ll also remember the seniors for being a group that “maintained who they were” and was able to “weather storms as they moved through it.”

“You know, 2017, we had a bounce-back year,” Dantonio said. “Then last year, we had a lot of close games. Could have won a couple of those.

Dantonio lauded the five defensive players who could have left early but opted to stay — Raequan Williams, Mike Panasiuk, Joe Bachie, Dowell and Willekes — as a “testament of their attitude toward this football team.”

He praised Lewerke for being the only quarterback in program history to throw for over 7,000 yards and rush for over 1,000, receiver Darrell Stewart for his impressive start to the season before going down with an injury, and Williams for his streak of 40 consecutive starts on the defensive line.

“You have some individual guys that have done some great things,” Dantonio said. “But they have maintained a positive approach and sometimes as much as anything, that's to be applauded. I'll respect them forever for that reason.”

While the senior class has fallen short of most of its goals this season, the group can’t rewrite the script that's unfolded over the past 13 weeks. But they can at least still have a say in how it ends.

“It's always about what you can do,” Dowell said. “You can't control or change what happened in the past, but we have an opportunity this week to get a win against Maryland and become bowl-eligible. That's our focus.

“Whenever you get to that sixth (win), whether it's the sixth game into the season, eight games into the season or even the last game of the season like it is now, it's special. That's something we don't take for granted.”