'We answered the bell': Spartans sprint to big lead, hang on against Georgia in Maui Invitational

What first looked like a stroll down the beach quickly became anything but for Michigan State on Tuesday.

'We answered the bell': Spartans sprint to big lead, hang on against Georgia in Maui Invitational

Lahaina, Hawaii — Michigan State had been in this position before — watching as an opposing guard started going off, single-handedly leaving the Spartans staring at the rafters as they wondered if he’d ever miss.

It happened in the first game of the season when Kentucky’s Tyrese Maxey dropped 26, including a deep 3-pointer in the final moments to clinch the Wildcats’ victory. And a little more than a week later, the Spartans managed to overcome 37 from Myles Powell to knock off Seton Hall.

On Tuesday in the Maui Invitational, it was Anthony Edwards of Georgia who was next to try and beat Michigan State all on his own. For a brief moment, it looked like the five-star freshman that Tom Izzo recruited heavily was about to bring his team back from a 28-point second-half deficit, scoring 37 points —33 in the second half.

However, the Spartans have been through their share of battles and happen to have their own star —Cassius Winston. The senior kept Michigan State calm in the final minutes and helped guide No. 3 Michigan State to a 93-85 victory at the Lahaina Civic Center.

Winston scored 28 on 10-for-16 shooting and handed out eight assists, looking as comfortable as he has all season to guide the Spartans through the storm. Xavier Tillman added 15 points and 11 rebounds for the Spartans (4-2) while Aaron Henry scored 14.

“So you’ve got to focus on getting the rebounds, you can't let them get second chances, you can't turn the ball over, things like that that's going to just kind of keep the game in your hands as much as possible. Those are the types of things that we got to kind of shore up at the end.”

Shore up, sure, but sometimes it’s a guy just making tough shots.

“Once a guy like that gets in a zone,” Izzo said shaking his head. “It was Tyrese Maxey, then it was my man from Seton Hall, and now it's this guy.”

After the game, it was suggested to Georgia coach Tom Crean that Edwards was going through an out-of-body experience.

“It definitely was,” said the former Michigan State assistant.

Edwards insists the final 16-minute barrage wasn’t just about him.

“When I step on the floor I don't really care about what people think I should do on court,” he said. “I just play for my team. I've always been a team player. My team's always behind me.”

For the first 25 minutes of the game, Edwards and the Bulldogs weren’t doing much to faze the Spartans.

Michigan State looked like it was taking out some frustration in the first half, using a 10-0 run to flip the momentum early then using three straight 3-pointers — two from Foster Loyer and one from Winston — to open things up on a Georgia team that struggled to defend.

Henry was effective early and scored 11 in the first half while Winston scored 13 on 6-for-10 shooting while handing out three assists as Michigan State led, 52-31, at halftime.

The second half followed a similar path as Michigan State extended its lead to 28 at one point before Georgia showed some life behind Edwards, who hit three straight 3-pointers to get heated up, which sparked a 17-3 run to pull the Bulldogs within 65-53 with 12 minutes left in the game.

The Michigan State lead eventually shrunk to four after an Edwards three made it 72-68, but Malik Hall answered with his own to give the Spartans a 75-68 advantage only for Rayshaun Hammonds to nail his own 3-pointer and Georgia then cut it to 75-75 with just more than two minutes to play after a Hammonds layup.

After a Henry 3 and a pair of Winston free throws, Edwards dialed up from deep again to pull the Bulldogs within 80-76 with just less than four minutes to play.

But Tillman answered with a 3 from the corner and Malik Hall scored on a layup to put MSU up nine with just more than two minutes to play before Michigan State put the game away at the line.

“Let's not forget this: When they cut that lead to 10, to eight, to two, we answered the bell, too,” Izzo said. “That wasn't easy and we had some guys make some big plays. But, boy, you got to give Antman credit, I mean, he made some shots that I wouldn't even allow a church league team I used to play on take. And he made them and he made them well.”

With the win in hand, Michigan State advanced to the fifth-place game at 2:30 p.m. on Wednesday where it will take on UCLA. 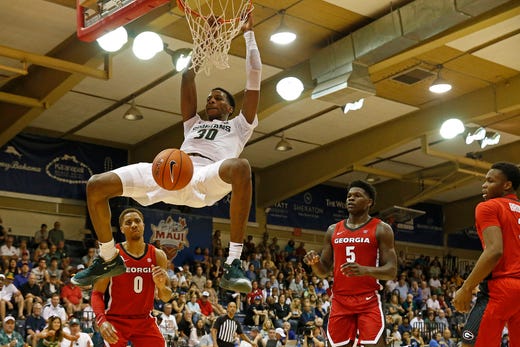 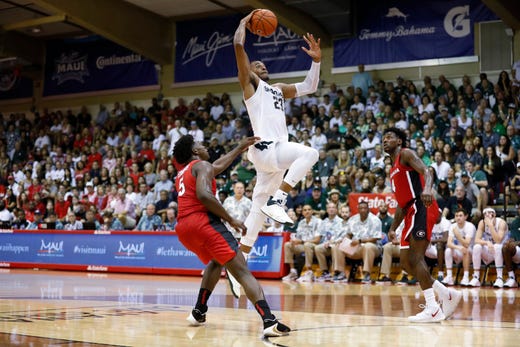 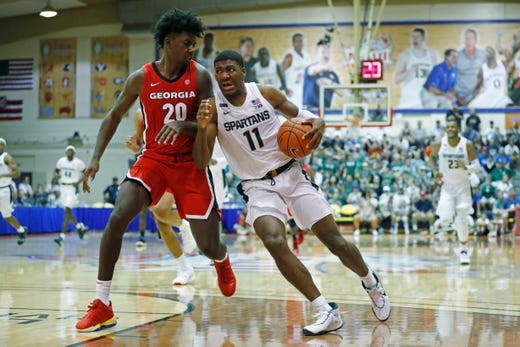 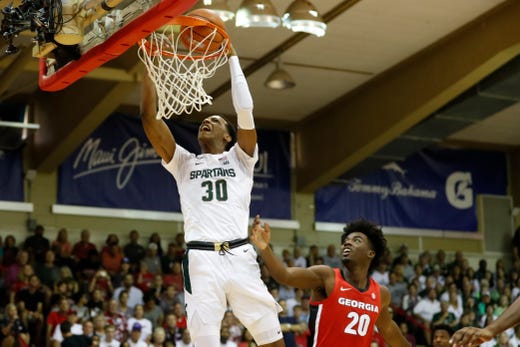 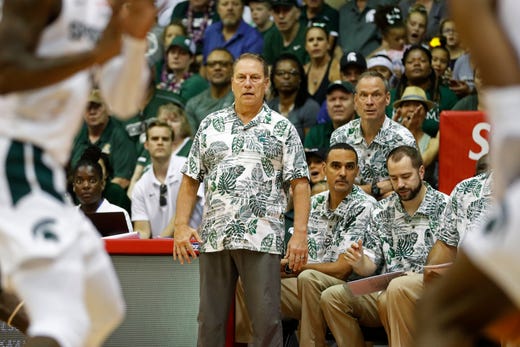 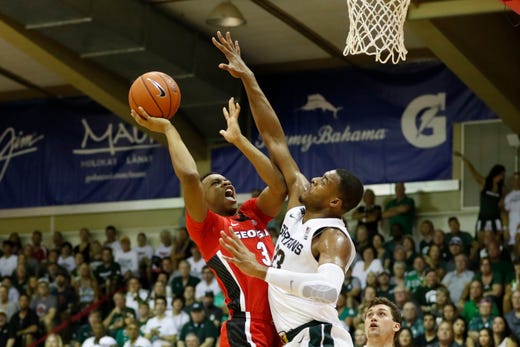 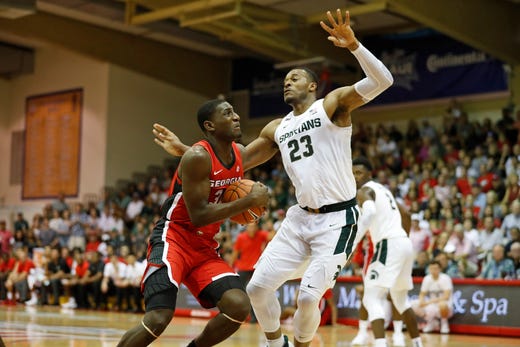 Georgia forward Mike Peake (30) tries to get to the basket over Michigan State forward Xavier Tillman (23) during the first half. Marco Garcia, AP
Fullscreen