Cassius Winston scored 20 and handed out five assists for the Spartans (5-2), while Xavier Tillman added 14 points and Rocket Watts scored 12. 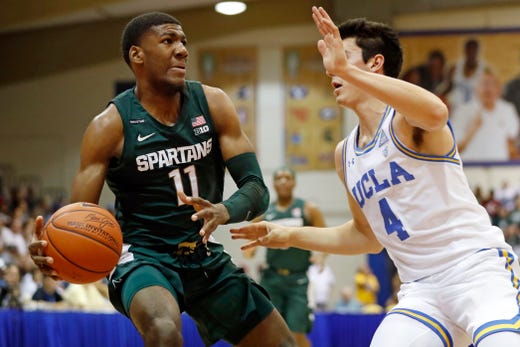 Michigan State forward Aaron Henry tries to get around UCLA guard Jaime Jaquez Jr. during the first half at the Maui Jim Maui Invitational in Lahaina, Hawaii on Nov. 27, 2019. Marco Garcia, AP
Fullscreen 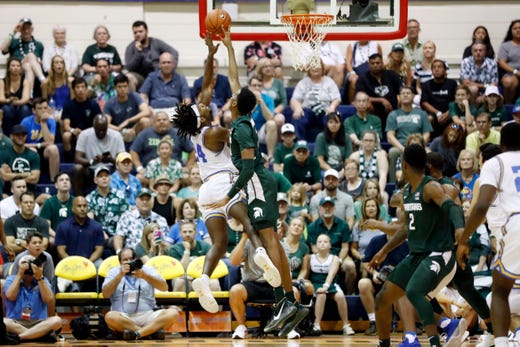 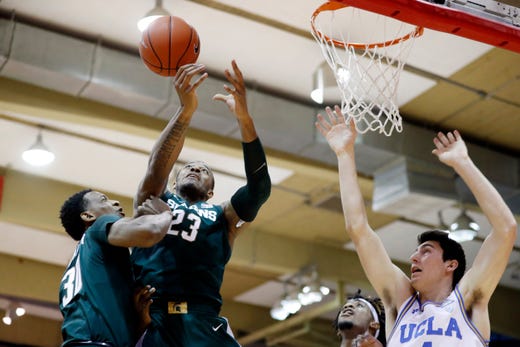 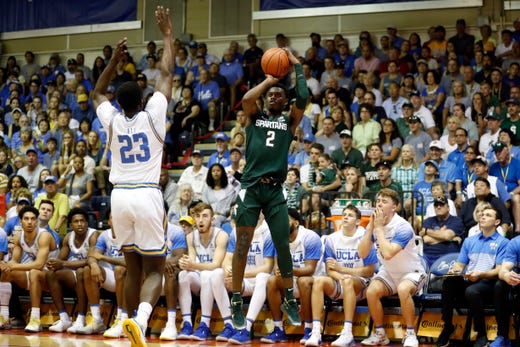 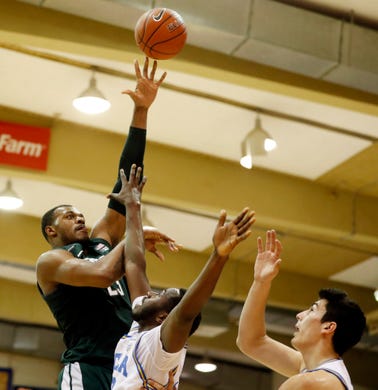 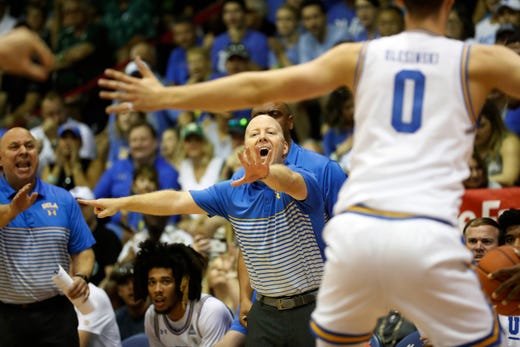 UCLA head coach Mick Cronin shouts at his team as they take on Michigan State during the first half. Marco Garcia, AP
Fullscreen 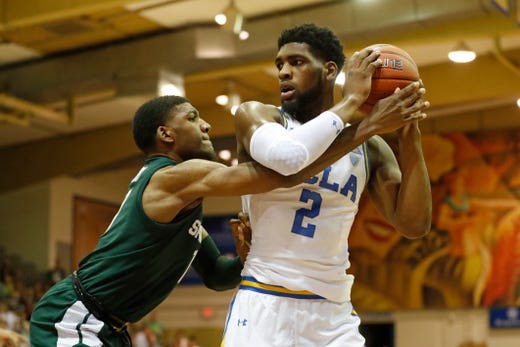 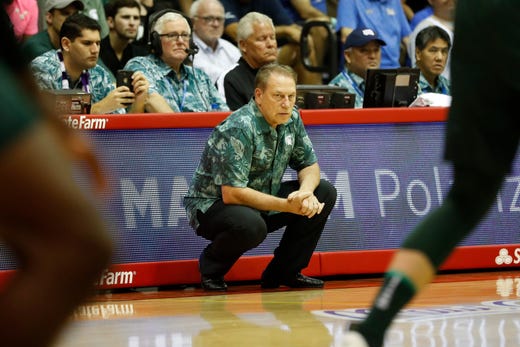 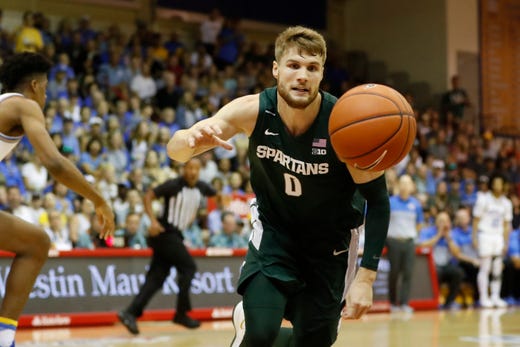 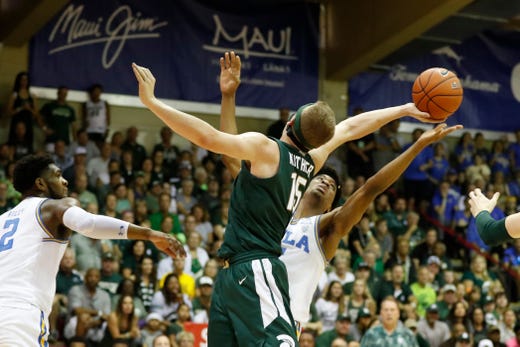 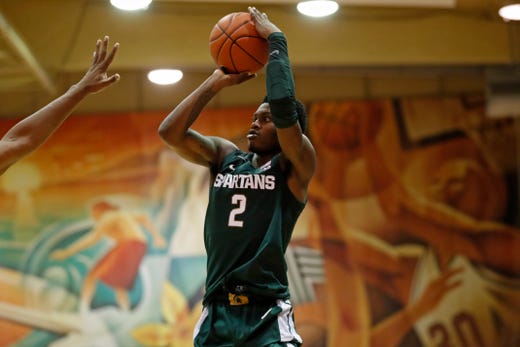 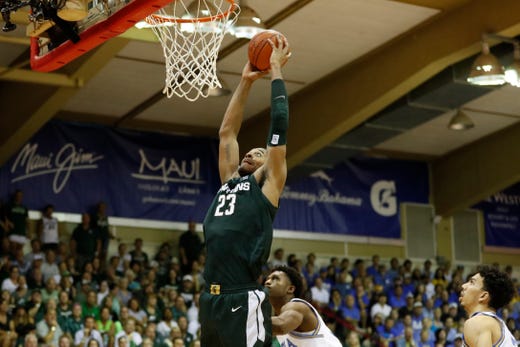 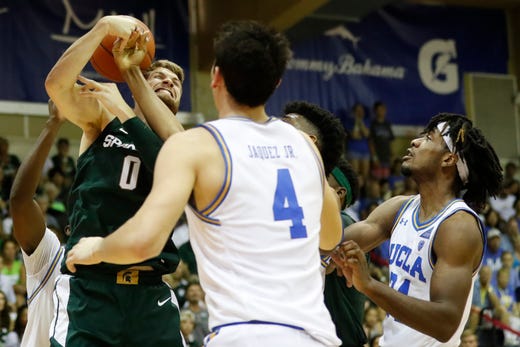 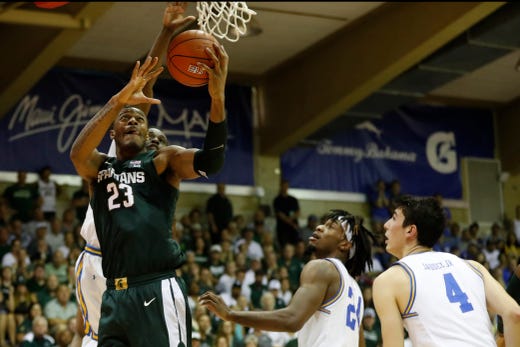 Michigan State forward Xavier Tillman (23) goes to the basket over UCLA during the second half. Marco Garcia, AP
Fullscreen

Lahaina, Hawaii — Michigan State wasn’t about to let another team claw its way back.

The Spartans had been down that road on Tuesday when their 28-point second-half lead against Georgia dwindled all the way to 2 in the final minutes before the Spartans made enough plays down the stretch to salvage the victory. 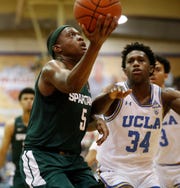 On Wednesday, in the fifth-place game of the Maui Invitational, No. 3 Michigan State was up 15 on UCLA with just more than nine minutes to play. Over the next three minutes, the Bruins had managed to trim the deficit to 61-52 with 5:47 left.

That’s where things ended, though, as Michigan State controlled the final five minutes and never let UCLA get any closer in a 75-62 victory at the Lahaina Civic Center. Cassius Winston scored 20 and handed out four assists for the Spartans (5-2) while Xavier Tillman added 14 points and Rocket Watts scored 12.

“I thought these two guys played their tail off,” Michigan State coach Tom Izzo said of Winston and Tillman. “I would say the only problem that I am struggling with a little bit -- we go small sometimes — is we did get outrebounded by one, but they're big. And we're missing layups. We're missing layups. And I already talked to X, he's one of them, but it's not just him. The sad part is I think if he would have made his layups in this tournament he would have averaged probably 18 points a game.

“So his offense is really starting to come along and we're starting to go to him a little bit more. And Cassius is still the guy that stirs the drink, coaches the team, and makes the popcorn.”

Tillman missed his share of makeable shots, but he was still active on the glass with seven rebounds and blocked three shots. The way the Spartans responded after Monday’s loss to Virginia Tech is what Tillman was talking about after the game.

“I would definitely say our turnaround,” Tillman said of what changed for Michigan State between games. “Even though we had a tough loss at the beginning, they did a good job of just bouncing back in that first two-thirds of the Georgia game when we were just on a tear defensively, offensively getting open shots. And then this game coming in on a tear, everybody locked in everybody doing their job. So I would just say our bounceback is what I would take from this.”

It helps to have a guy like Winston, one of the best players in the nation. With UCLA leading early in the first half, Winston started to heat up. The Bruins held an 18-14 lead with just more than five minutes left before halftime when Winston hit a pair of 3-pointers as part of a 12-2 run for the Spartans.

A late defensive lapse allowed UCLA to pull within 26-23 on a 3-pointer from Jake Kyman and Michigan State turned the ball over on its final possession as it took a three-point advantage to the locker room.

“You can't beat Michigan State and go 2-for-15 from the 3-point line,” UCLA coach Mick Cronin said. “We had some really good looks. We went through some different lineups, we exploited their help a little bit. We just didn't knock them down. I thought the big key of the game, we should have been winning at halftime. With the looks we had from the 3-point line in the first half we were 2-for-10. We had some great looks.”

The Spartans shifted the lineup in the second half with Gabe Brown in for Aaron Henry. It paid off right away as Brown nailed back-to-back 3-pointers less than three minutes in to give Michigan State an 11-point lead. It was a margin Michigan State maintained for the bulk of the second half as Malik Hall scored six straight at one point and five in a row from Winston gave the Spartans a 57-42 lead with 9:23 to play.

UCLA didn’t fold, though, and chipped away enough to get the deficit into single digits after a tough drive by Riley to pull the Bruins within 67-58 with 3:19 to play. But Michigan State continued to hold the Bruins off, essentially putting the game away on a Watts 3-pointer with 1:38 to play that gave the Spartans a 14-point lead.

Michigan State coach Tom Izzo is joined by Cassius Winston and Xavier Tillman after the win over UCLA at the Maui Invitational. The Detroit News

Chris Smith scored 13 to lead UCLA (5-3) while Cody Riley scored 11 and Prince Ali chipped in 10 points for the Bruins.

“And you're seeing upsets all over the country, and it's because people are playing tougher competition. A lot of these teams, like the Daytons of the world, they're good. They're really good.”

Michigan State now heads home to prepare for Tuesday’s matchup with Duke at Breslin Center as part of the ACC/Big Ten Challenge.