Michigan State coach Tom Izzo said he doesn’t expect Joshua Langford to play this season and the focus is on Langford’s future.

Michigan State coach Tom Izzo talks about the matchup with Duke in the ACC/Big Ten Challenge on the night Draymond Green's No. 23 is retired. The Detroit News

East Lansing — As Michigan State continues to sort out its rotation, it doesn’t look like senior Joshua Langford will be back this season to help remedy any problems.

After missing all but 13 games last season with a broken foot, Langford suffered a stress reaction in the foot just before the season and will be re-evaluated in late January. On Monday, as the Spartans were getting set to host No. 10 Duke on Tuesday night, coach Tom Izzo said he doesn’t expect Langford to play this season and the focus is on Langford’s future. 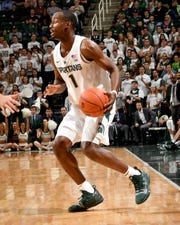 Joshua Langford has played 83 games for Michigan State, but his playing career with the Spartans appears to be over. (Photo: Dale G. Young, Detroit News)

“We’re looking at some things now and I’m more worried about Joshua's future than the present,” Izzo said. “I think I was pretty upfront when I said I'm not counting on Josh coming back. That would be frosting on the cake. That would be great if it happened, but just by the progress and the length of time it took before and where he's at, I just want to get Josh back where he can continue to play basketball beyond this year. That's kind of the big worry and big concern for me right now.”

Langford was expected to be a big part of this season’s team, starting alongside fellow senior Cassius Winston to form a potent backcourt. Instead, Langford is wearing his familiar boot and doing what he can from the bench.

The 6-foot-5 guard who has started 75 of 83 career games, was averaging 15 points a game last season when he sat out the second half of the Northern Illinois game. At the time it was done as a precaution, but by February, Langford underwent surgery, one that took him most of the summer to recover from.

Just before this season, when it was revealed Langford would be out until at least January, he said this season would be his last at Michigan State. Whether that has changed is unclear, but getting back on the court this season seems unlikely.

“This is not like Mateen Cleaves where we knew he had a bone that was broken and it was going to be eight weeks and he'll be back,” Izzo said. “This has been a different situation. So we're not sitting here saying Josh will be back. We're sitting here saying, ‘Wow, if Josh could play at all this year, that would be frosting on the cake.’”