Michigan State's Kenny Willekes earned the Burlsworth Trophy, awarded to the nation's top college football player who began his career as a walk-on.

Michigan State senior defensive end Kenny Willekes won the Burlsworth Trophy on Monday, awarded to the top college football player in the country who began his career as a walk-on. 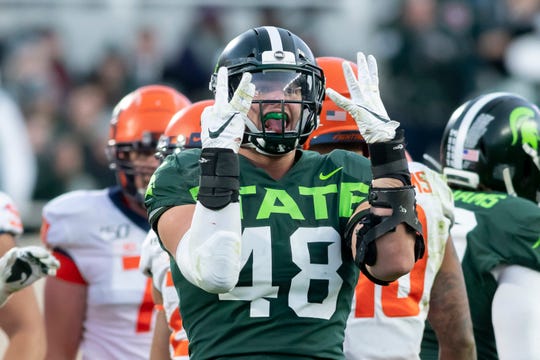 Willekes, a Rockford native who starred at NorthPointe Christian in Grand Rapids, was an All-Big Ten first-team selection by the media this past season. He's a two-time Most Valuable Player at Michigan State.

He has 69 total tackles, including a team-leading 14.5 for loss and nine sacks, this season. Willekes also has a pair of fumble recoveries.

The trophy is in its 10th year. Former Clemson receiver Hunter Renfrow, now with the Oakland Raiders, won the award last season.

And the winner of the 2019 Burlsworth Trophy is... Kenny Willikes, Defensive End from Michigan State! pic.twitter.com/97zxfMYHRO