The bright lights have faded for the moment at Michigan State, and that’s probably exactly as it should be for the Spartans.

East Lansing — The bright lights have faded for the moment at Michigan State, and that’s probably exactly as it should be for the Spartans.

After a whirlwind open to the season that included stops in New York and Maui with games, home and away, against top-ranked opponents, No. 16 Michigan State is now entering a stretch over the next few weeks that could be critical in determining where the season heads. 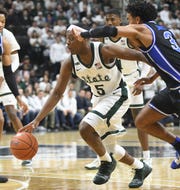 The Spartans take on Oakland at noon Saturday at Little Caesars Arena, then follow that with a trip next week to Northwestern before home games against Eastern Michigan and Western Michigan. That’s it over the next three weeks, and it affords the perfect opportunity for Michigan State to start to work on some important aspects of the game, namely improving its shooting, shore up its defensive effort and get healthy.

“Right now I think it's really important that we grow as a team,” Michigan State coach Tom Izzo said this week as the players finish final exams. “We get through (this week) and get our guys through finals, and then we start rocking and rolling.”

The first act when Michigan State (6-3, 1-0 Big Ten) gets back on the court won’t include freshman guard Rocket Watts. He’ll miss his second straight game with a stress reaction in his lower left leg and his status for the game at Northwestern on Wednesday remains up in the air.

One thing is certain — the Spartans don’t feel like they’re in any hurry to force Watts back into the lineup.

“It’ll be a tough decision next week,” Izzo said. “But we're not gonna mess (with) that, not when we’ve got the Big Ten season coming up and even though we’ve got a Big Ten game next week, we're not desperate. We're not going to do that. I mean, it's a long year.”

When Watts does come back, the question will be how much he can improve his shooting and, in turn, get the Spartans to start knocking down some outside shots.

The injury clearly affected Watts, Izzo said, and clearing that up should help.

“We went back and watched some film and if you watch the shots he took, he was leaning left like he wasn't pushing off his left foot,” Izzo said. “Where it really was evident is I told him he set a North American record for blocked layups in the season so far. We went and watched that and it's obvious that he had no lift in his left leg, but I give the kid credit for sucking it up and not saying anything. … I'm just pleased that I think we're going to have it taken care of.”

Even as Michigan State struggles from 3-point range, it’s not Izzo’s biggest concern.

After all, the Spartans are scoring almost 80 points a game and rank as the No. 1 offense in the nation, according to Kenpom.

For Izzo, the improvement needs to come on the defensive and getting the fast break going, something that hasn’t been clicking yet this season. The Spartans currently rank 10th in the Big Ten scoring defense while their adjusted offensive tempo ranks 117th in the nation, according to Kenpom.

The bright side for Izzo is he believes the issues are all fixable.

“Most of those things I talked about are not a skill,” Izzo said. “It's just a little effort. Maybe it's a little fatigue. We got to figure out what it is, the travel, Cassius early (in the season). I think Cash did a great job pushing it (against Rutgers). That's what we're going to look at.”