MSU's Tom Izzo is 17-0 vs. Oakland, but he's not taking LCA showdown for granted

When the Golden Grizzlies take on No. 16 Michigan State (6-3, 1-0 Big Ten) at noon at Little Caesars Arena, they’ll be trying to end a 17-game skid against the Spartans.

MSU's Tom Izzo is 17-0 vs. Oakland, but he's not taking LCA showdown for granted

East Lansing — Playing some of the top programs in the country is nothing new at Oakland.

The Golden Grizzlies routinely line up quite the schedule of big boys every season, and for the better part of November and December, veteran coach Greg Kampe leads his team through the gauntlet as it tries to prepare for Horizon League play while bolstering their NCAA Tournament resume.

This season, alone, Oakland has played at Maryland followed by four straight road games against high-end Mid-American Conference teams. It then travels to Syracuse next week. In previous seasons, the Grizzlies have played the who’s who of college basketball — Arizona, Gonzaga, Indiana, Kansas, North Carolina. They even had back-to-back wins over Tennessee in 2010 and 2011.

However, all of those games come in second to the one Oakland is set to play for the 18th time Saturday. When the Golden Grizzlies take on No. 16 Michigan State (6-3, 1-0 Big Ten) at noon at Little Caesars Arena, they’ll be trying to end a 17-game skid against the Spartans.

A win wouldn’t insure the Grizzlies a conference title or guarantee them a spot in the postseason, but it’s the premier game on their schedule, and nobody understands that better than Michigan State’s Tom Izzo.

“I think what you got to realize is that is their Madison Square Garden game,” Izzo said. “For their guys, it's really an unbelievable opportunity not only to play in an arena like that — usually it's been a packed house — but then to play a team like us, to be honest with the you.”

Oakland (5-5) is used to playing teams like Michigan State. And, judging by how tight some of the games have been over the years, the Golden Grizzlies aren't in awe of the moment, either. They weren’t in 2010 when Michigan State squeaked out a one-point win at The Palace or two years later when the Spartans won by four at the same venue.

In 2015, the Grizzlies came the closest to beating the Spartans, who entered the game at The Palace as the No. 1 team in the nation and unbeaten in the first 12 games. They were without Denzel Valentine, who sat with a knee injury, but got 32 points from Bryn Forbes to pull out the win in overtime.

It was a crushing blow for the Grizzlies. Kay Felder had a chance to put Oakland up in the final seconds as he got fouled on a drive to the hoop, but his shot hung on the rim before falling off. He made two free throws to send the game to overtime but Michigan State pulled away.

“I don’t know what to say,” Kampe said that day, trying to come to grips with what might have been. “I thought the ball was going in. I thought Felder’s shot at the end was going in and it hung on the thing and fell off. That close. That close to beating the No. 1 team in the country.”

Izzo understands how frustrated Kampe was that day, and he knows how difficult it is to beat his teams. The pair of coaches have grown close over the years and that’s why the teams are in the first year of another six-year contract that will see them play three times in Detroit and three times in East Lansing.

That friendship goes out the window, though, when they square off and just the odds of beating a team 18 straight times has Izzo leery of this season’s matchup.

“It's always a tough game,” Izzo said. “He’s had some average teams that we won by five and he has had some good teams that we lucked out and won. Once in a while we've had a blowout, but not very often though. We’ve played them 17 times, so when you play him that many times, you know if you don't think I get nervous about that, when do things just happen?”

More: Battle-tested MSU hoops looking forward to a lighter schedule; OU up next

Things have been happening all around college basketball this season. There have already been four No. 1 teams — Michigan State was the first — but they’ve all lost and there will likely be a fifth No. 1 by Monday after Louisville lost its first game of the season to unranked Texas Tech.

That trend, along with the history between Michigan State and Oakland, has the Spartans dialed in on the Grizzlies.

“You can’t overlook this game,” sophomore Aaron Henry said. “They’re just a pesky team. They’re always competing, they always play hard. I remember them last year, and even though we won by a significant amount the game felt closer than what it really was. It’s just a team that competes and you can't overlook teams like this. This is where you can slip up and fall in the rankings and you’ve just got to play the game and not play the opponent. 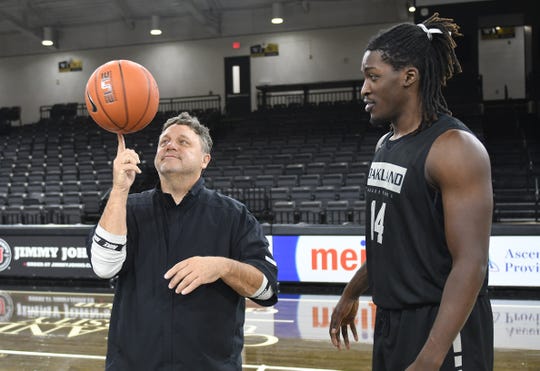 “They’ve got some good players. Don't get me wrong, even as a mid-major you can't treat anybody like that, especially with our schedule. Everybody's gonna be coming for us just like anybody would be coming for any other great team.”

While Michigan State deals with Oakland, it also will be the last trip to Detroit for star guard Cassius Winston. The former Mr. Basketball from UD-Jesuit has had a difficult time in recent weeks as he deals with the death of his brother, but the return to his hometown could be a welcomed visit.

Winston has played at Little Caesars Arena before as Michigan State beat Oakland there in 2017 and it was the site of Michigan State’s NCAA Tournament flameout in 2018. This trip, likely his last as a Spartan, is won Winston is looking forward to.

“People know what the city means to me,” Winston said. “I enjoy every time I go back there and they support me, they loved me through this whole journey. So just to have the chance to go back there and play in Detroit, that's an amazing feeling.”

Outlook: Michigan State and Oakland meet for the 18th time with the Spartans leading the series, 17-0. … Three games in the last eight in the series have been decided by less than 10 points with the game in 2015 going to overtime. … Senior forward Xavier Hill-Mais leads Oakland scoring 15.9 points while grabbing 7.9 rebounds per game. Sophomore forward Daniel Oladapo is averaging 11.5 points and 7.2 rebounds a game.