For Michigan State, the hope is a Pinstripe Bowl victory can provide a sense of momentum heading into the 2020 season.

New York — As Michigan State’s players filed onto the field Thursday at Yankee Stadium, it was all about the experience.

The Spartans took part in a youth clinic while having their own version of fun, tossing the ball around the field and taking pictures of the iconic stadium. Previous days included trips to the 9/11 Memorial Museum and a Broadway show while coach Mark Dantonio rang the opening bell at the New York Stock Exchange.

You hear it often from coaches and administrators during a bowl week — the game is important, sure, but so is the student-athlete experience. During the last few days in the Big Apple, Michigan State and Wake Forest have had plenty of that.

“We were real excited when we found out we were going to the Pinstripe Bowl,” fifth-year senior defensive end Kenny Willekes said early in the week. “Playing at Yankee Stadium, that’s as iconic as it gets. They have a bunch of events set up for us; we went to a comedy show (at the Lincoln Center), we’re going to the 9/11 Memorial, and we’ve just been walking around the city and went to Times Square last night. It’s just a really cool opportunity to do this with my teammates.” 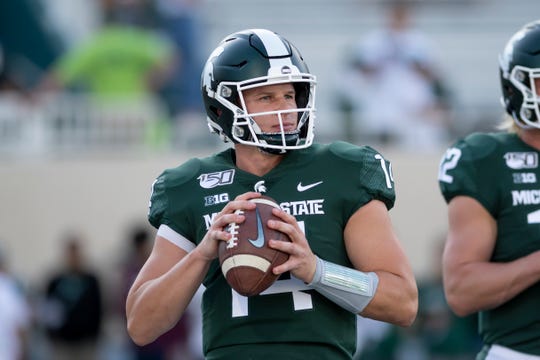 However, as it does in every bowl game, there’s a point where things shift.

“Today was the day it flipped from a field trip to an away football game. … It's just all about the game. With about 24 hours to go, we've got to be able to successfully flip that switch for our football team to play a really good football team.”

Ready or not, both teams will have to make that flip by 3:20 p.m. on Friday when Michigan State (6-6) and Wake Forest (8-4) kick off in the 10th playing of the Pinstripe Bowl. It’s the first time the programs have played each other.

Both teams have been able to successfully transition to game mode as the Demon Deacons have won three straight bowl games while the Spartans had a four-game run from the 2011 Outback Bowl to the 2014 Cotton Bowl and have won five of 11 bowl games under Dantonio.

“In any bowl game, the goal is ultimately to give your student-athlete a great experience,” Dantonio said. “But the goal of any bowl game, I think, is to win. And we've been on both ends of that spectrum and there's a difference. It can propel you forward as a program, and if you're not fortunate to win, you've got to regroup and you move forward anyway.”

The win is important. After all, that’s the whole reason for playing the game. And for Michigan State, the hope is a victory can provide a sense of momentum heading into the 2020 season.

Bowl victories have done so in the past, especially in 2012 when Michigan State rallied to beat TCU in the Buffalo Wild Wings Bowl then won 36 games over the next three seasons, winning two Big Ten titles and reaching the College Football Playoff.

However, things have gone the other way, too. After the victory over Washington State in the 2017 Holiday Bowl capped a 10-win season, the Spartans went 7-6 last year with a loss to Oregon in the Redbox Bowl and have again struggled to put points on the board this season.

So, there’s no guarantee that whatever happens on the field Friday will impact 2020 and beyond. However, that won’t change Michigan State’s priority of winning the game.

That was clear when Dantonio was asked Thursday about playing some of the backup quarterbacks.

“We're going to play to win so whatever quarterback gives us the best chance to do that, to move forward, that’s what we'll do,” Dantonio said.

Fifth-year senior Brian Lewerke will start for the 38th and final time in his career, but there’s been plenty of work in bowl practice for sophomore Rocky Lombardi, redshirt freshman Theo Day and freshman Payton Thorne. There’s a chance each could play, but only if it fits in with the primary goal.

It’s a goal that has been aided by the fact none of Michigan State’s potential NFL Draft picks opted to sit out the game, something that happened last year when cornerback Justin Layne opted not to play.

“That was very refreshing because it spoke to our team effort,” Dantonio said. “That’s what football is. It’s the ultimate team sport, I think. So I really never even had to address that with them. They made a decision to come back, as they did last year. I think they want to see it through and I’m very appreciative.”