'A mark of a good team': Michigan State refuses to get rattled, rolls over Minnesota

Xavier Tillman finishes with 19 points and a career-high 16 rebounds while Cassius Winston supplies 27 points — 18 in the second half — for a 74-58 victory.

'A mark of a good team': Michigan State refuses to get rattled, rolls over Minnesota

East Lansing — Just days after its biggest win of the season, Michigan State found itself in a slugfest with Minnesota on Thursday night at the Breslin Center.

Fortunately for the Spartans, they have the luxury of having one of the best tandems in the country. They needed a 1-2 punch to get past a scrappy Golden Gophers team and senior guard Cassius Winston and junior big man Xavier Tillman delivered.

Tillman was the glue early in the game and Winston was the closer in No 8 Michigan State’s 74-58 victory that allowed Michigan State to remain unbeaten in the Big Ten.

Winston scored 27 — 18 coming the second half — and handed out six assists while Tillman scored 19, grabbed a career-high 16 rebounds, blocked five shots, had three steals and had four assists for the Spartans (13-3, 5-0 Big Ten).

Michigan State has more than that on most nights, and this was another where Winston and Tillman were outstanding while they got just enough from the supporting cast as Gabe Brown scored nine points and earned praise for his defense while Aaron Henry had seven points and seven assists.

Minnesota (8-7, 2-3) never let the game get out of hand thanks to the play of sophomore big man Daniel Oturu. He scored 22 points and grabbed 10 rebounds for the Golden Gophers, who had won four of their last five games. Marcus Carr chipped in 11 points and Alihan Demir added 10 points.

“That is a very a good basketball team,” Izzo said of the Golden Gophers. “And saying that we were very bad in the first half. It was the first time I saw us look a little selfish and we weren’t moving the ball. We just were stagnant offensively. But we were pretty good defensively and, to our credit, we did a better job in the second half.

“The stars, of course, were Cassius in the second half and Xavier did an unbelievable job. … I’m proud of the way we came back in the second half. We weren’t happy at halftime and they responded and I guess that’s the mark of a good team.”

While Minnesota was in the game the whole way, Michigan State’s 48-30 advantage on the glass with a season-high 19 offensive rebounds was a big factor.

“Credit to Michigan State,” Minnesota coach Richard Pitino said. “They just bullied us on the glass and it just wore us out. We were doing a lot of good things but we just could not finish the possession.”

Tillman and Oturu controlled the game in the first half as Tillman scored 13 points on 6-for-8 shooting while pulling down 11 rebounds — six on the offensive end — and handing out a pair of assists for the Spartans. Oturu scored 14 on 7-for-11 shooting and grabbed six rebounds for the Gophers.

While the big men were on point, the guard play was spotty for both teams.

Winston, Henry and Brown combined to shoot 4-for-15 in the first half for Michigan State as the Spartans turned the ball over eight times. Carr shot just 1-for-7 for Minnesota while the Gophers managed to gain a 28-24 lead with just less than four minutes left in the half.

The Spartans started to gain some separation early in the second half as the lead grew to 52-41 on a Brown layup in transition. However, the Gophers didn’t fold as Gabe Kalscheur hit a deep 3-pointer at the end of the shot clock to get the deficit back down to single digits.

Michigan State did a good job of holding Minnesota off, though, as Winston hit a step-back 3 with just less than eight minutes to play to put the Spartans ahead, 59-48. A Winston runner followed by another mid-range jumper gave the Spartans a 65-52 lead with 3:35 to play and essentially lock up the victory for Michigan State.

“We were able to take advantage of our inside presence early,” Tillman said, “and then Cassius got hot in the second half and we just let him hoop and focused on getting stops defensively while he took care of the offense.” 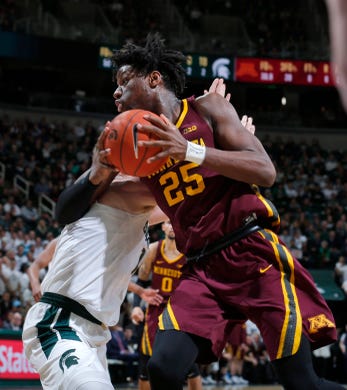 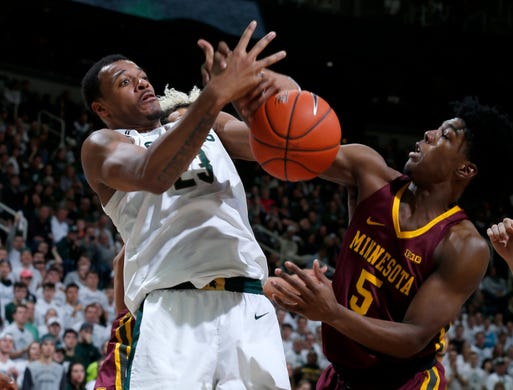 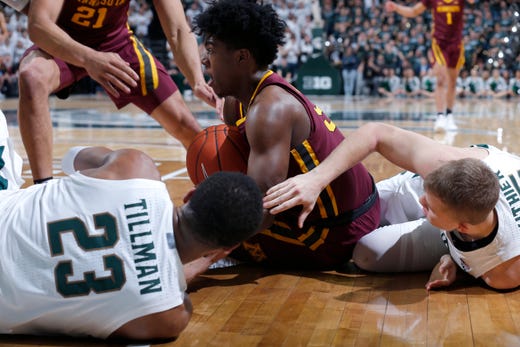 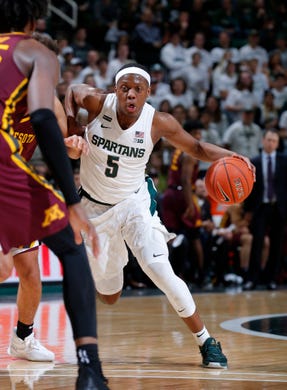 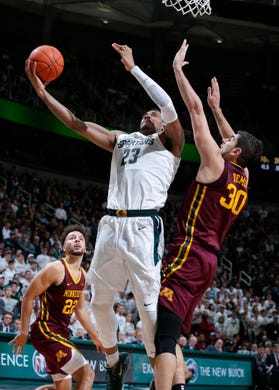 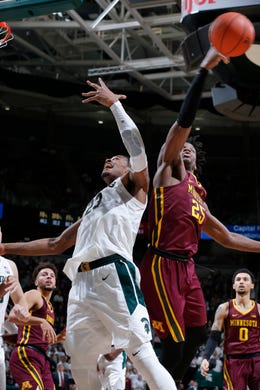 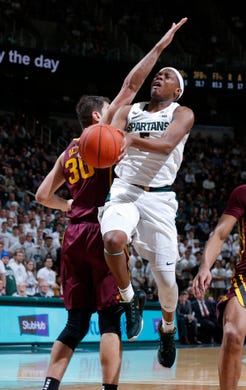 Michigan State's Cassius Winston drives to the basket against Minnesota's Alihan Demir during the second half. Al Goldis, AP
Fullscreen

It’s becoming common place for Tillman and Winston, who have been as consistent as any duo on the Big Ten.

Pitino marveled at Winston saying, “Cassius has 27 points and barely breaks a sweat. He just does it to you, he slowly kills you over a matter of 40 minutes.”

The next 40 minutes comes on the road for Michigan State when it travels to Purdue for a noon tip on Sunday. It will be just the second Big Ten road game and it will be a chance for the Spartans to continue an impressive start to conference play.

“It'll be a new experience for (the freshmen),” Izzo said. “But it's a good time to go on the road and see where we are.”