On Thursday, the Spartans found themselves in an 18-4 hole in an eventual loss at Indiana.

Bloomington, Ind. — Xavier Tillman shook his head, struggling to come up with an answer.

Sitting a few feet to Tillman’s right in the Spartans’ locker room at Assembly Hall on Thursday night, sophomore Aaron Henry had identified the problem but was annoyed he and his teammates had essentially repeated their previous woes. 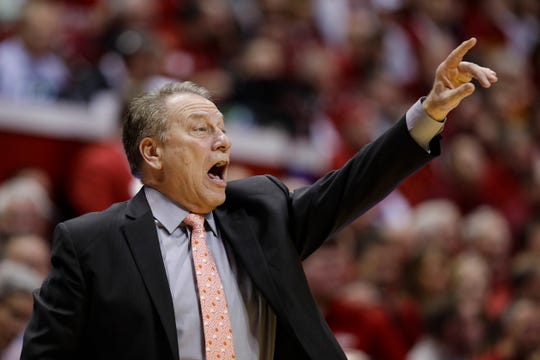 “We’ve got to be able to match the energy from the jump,” he said, emphasizing his words more as he continued. “We’ve got to fight from the jump and not just bring it after (the game starts). That’s been our problem on the road.”

That problem reared its ugly head again during Thursday’s 67-63 loss at Indiana, a game that began much like No. 11 Michigan State’s previous game away from home almost two weeks ago when Purdue jumped out to a big lead and never let up.

On Thursday, the Spartans found themselves in an 18-4 hole. At Purdue, it was a 19-4 deficit. The only difference against the Hoosiers was that Michigan State battled back and took the lead in the second half before coming up short, while at Purdue the Spartans got steamrolled, losing by 29.

The loss to the Boilermakers felt like an outlier, a night when one team played one of its best games of the season while another played one of its worst. But after a Thursday’s slow start, coach Tom Izzo was describing himself as being “totally disgusted.”

Much of his frustration was over the way senior guard Cassius Winston played in the first half, a feeling echoed by Winston himself.

“I didn’t come out to play and that hurt the team a lot,” Winston said.

Winston had struggled over the previous two games and that carried over into the first half on Thursday. He came to life in the second, scoring 13 points to finish with 17 and made three 3-pointers after missing eight in a row over the course of two games.

The key for Michigan State (14-5, 6-2 Big Ten) as it prepares for another road test at Minnesota on Sunday is keeping the slow starts from becoming a trend while hoping Winston has begun to break out of his slump. 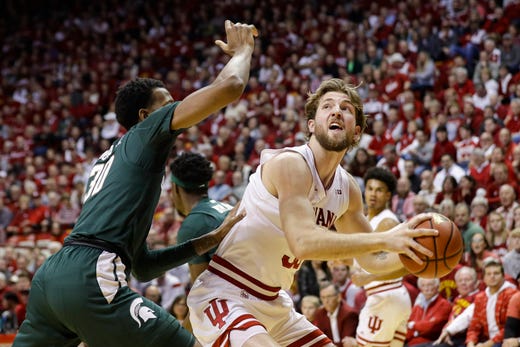 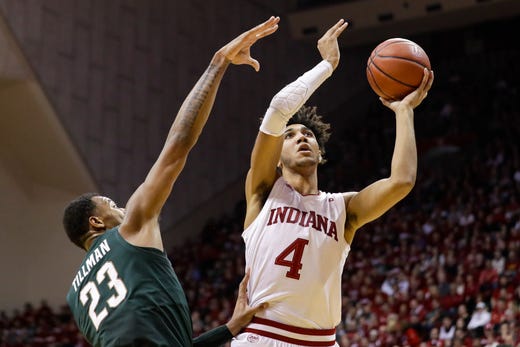 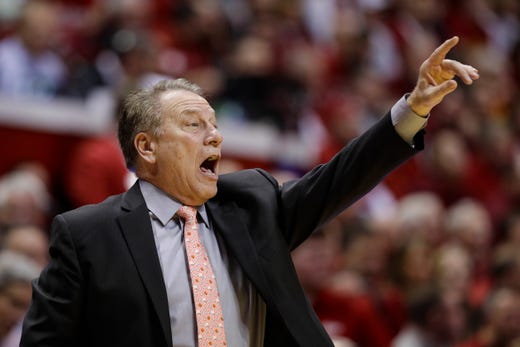 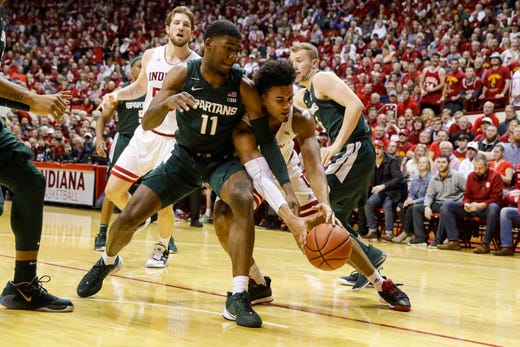 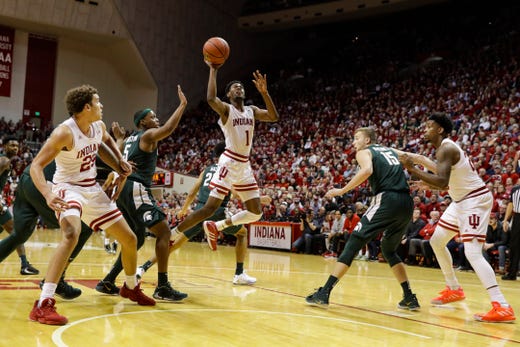 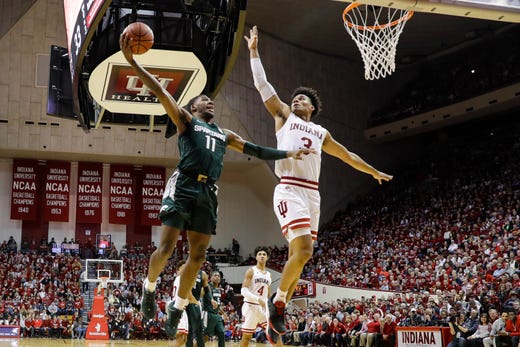 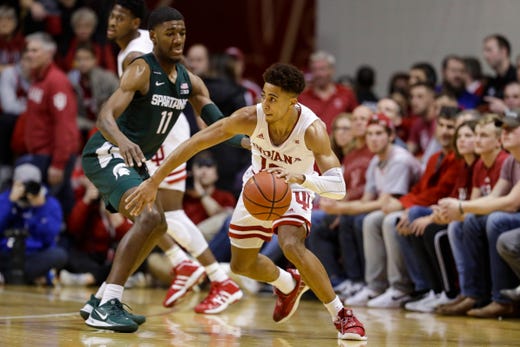 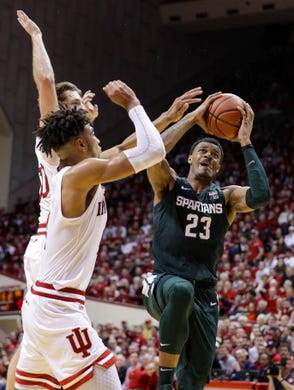 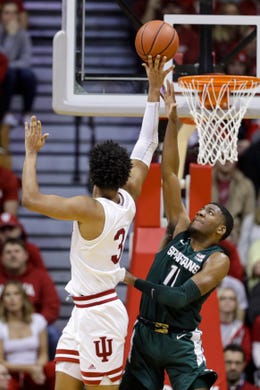 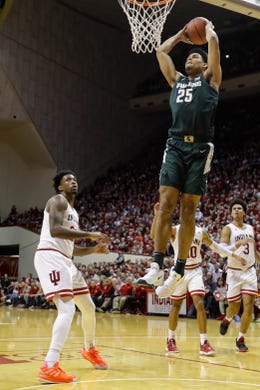 Michigan State forward Malik Hall (25) goes up for a dunk in front of Indiana forward De'Ron Davis (20) in the second half. Darron Cummings, AP
Fullscreen 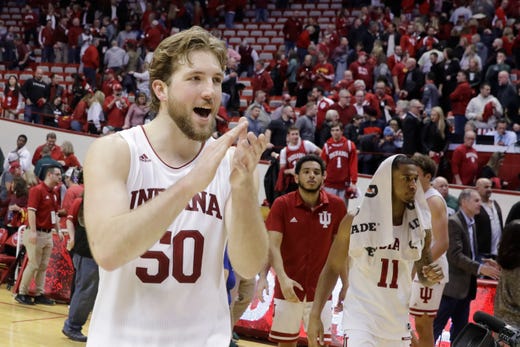 Rebounding in the second half at Indiana at least has given the Spartans a small measure of momentum headed to Minnesota.

“You can see the growth that we've taken from (the Purdue) game, we’ve just got to finish it,” Henry said. “We had plenty of opportunities to finish this game but these can bite us in the end if you want to win the Big Ten.”

Winston is confident the Spartans are starting to figure out their road issues.

“Definitely,” Winston said. “This was a good game because we played a really good second half but  didn't finish it out. I'm gonna try to carry that second half to Minnesota and just come out of this trip with a split. I don’t know where we are in the Big Ten, but we're still up there, we're still competing for (a title) and the end goal is still intact. It’s still there.

“So, this loss hurts. It could have been a real separator. We can't let it turn into two losses. We’ve got to learn from it and move on to the next one and keep moving forward.”

The loss dropped Michigan State into a first-place tie with Illinois, a team the Spartans have beaten at home this season and will face again on Feb. 11 in Champaign, Ill. Five more teams are a game back at 5-3 in the conference while two more are two games back.

In other words, winning two games this week would have been “a separator,” but Michigan State’s focus now is getting that split. The fact the Spartans went right from Bloomington to Minneapolis is something they’re hoping will help.

There’s no doubt the fire will be coming from Minnesota (11-8, 5-4). Michigan State handled the Golden Gophers at home in early January but the Gophers have won three of four since, including a win at Ohio State this week.

They’ll be shooing for the Spartans, just like everyone else in the Big Ten. Michigan State is tasked with responding.

“People are coming for our heads,” Henry said. “Home or road, we’ll get everybody’s best game. The moment we learn that and just match that energy when we get on the court, the better we'll be.”

Outlook: The Spartans have won six of the last seven in the series and have won three in a row at Williams Arena. … Cassius Winston scored 27 points in the first meeting while Xavier Tillman had 19 points and 16 rebounds. … Minnesota’s Daniel Oturu is second in the Big Ten in scoring at 19.7 points a game and is the leading rebounder, averaging 11.6 per game.