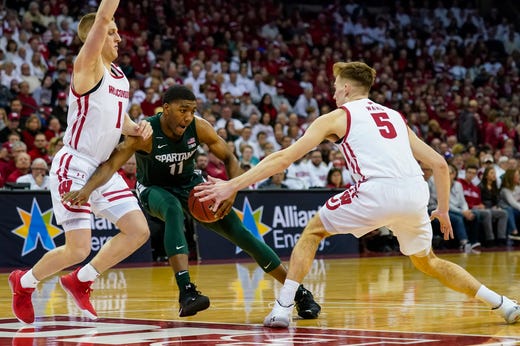 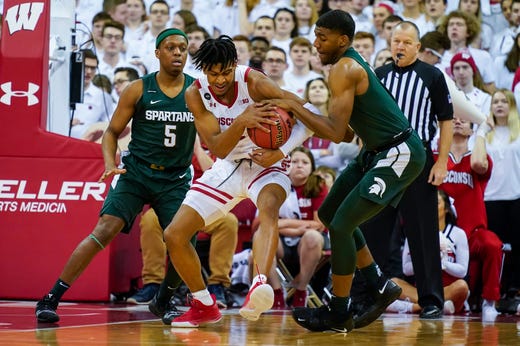 Wisconsin's Aleem Ford (2) and Michigan State's Aaron Henry (11) battle for the ball during the first half. Andy Manis, AP
Fullscreen 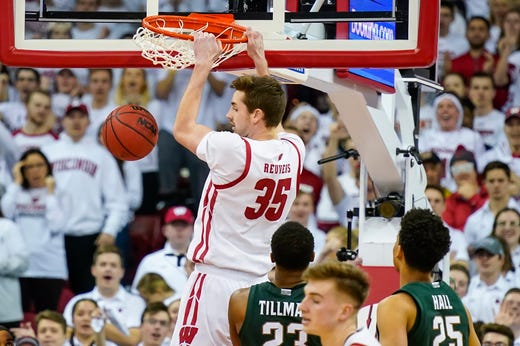 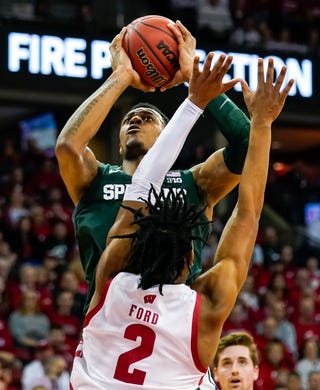 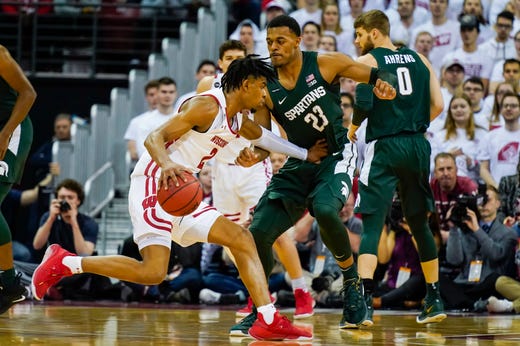 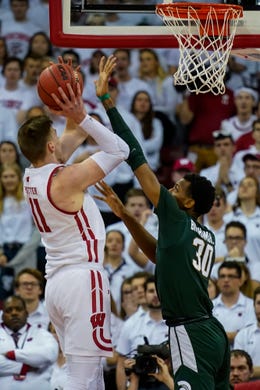 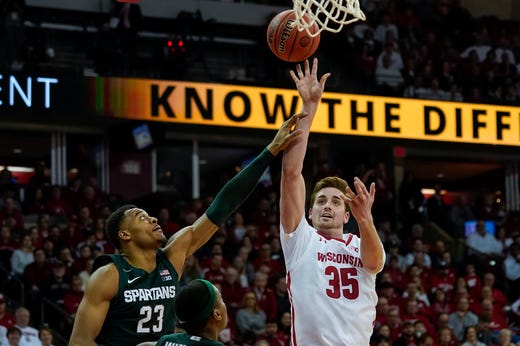 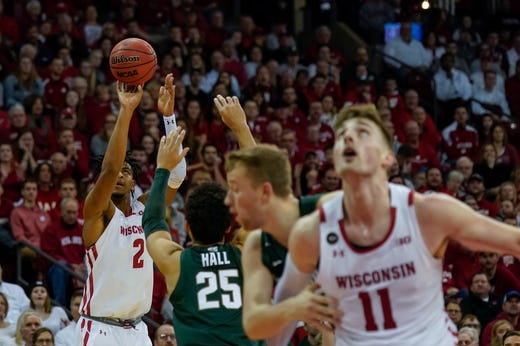 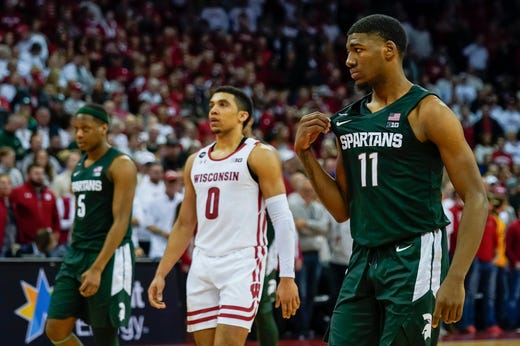 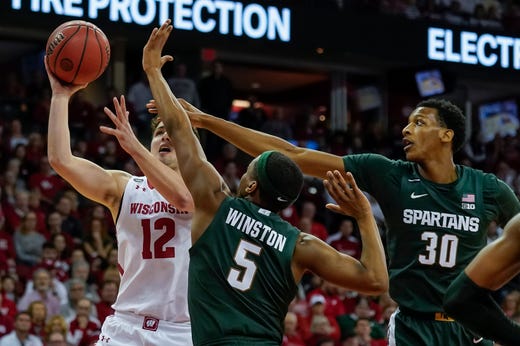 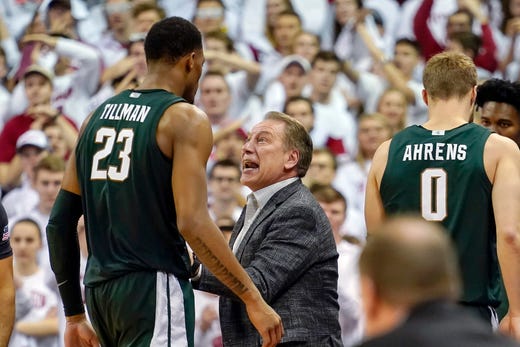 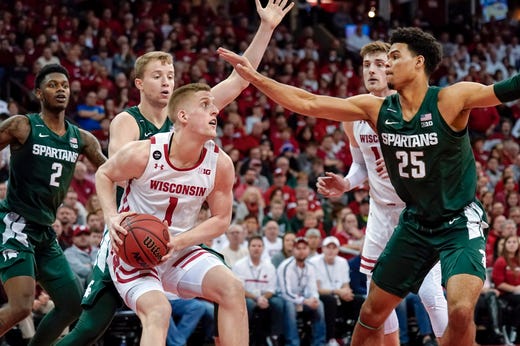 Madison, Wis. — The road in the Big Ten has been brutal this season, but everything seemed to be lining up Saturday for Michigan State to earn a second straight win away from home.

The Spartans were rolling after winning two in a row heading to Wisconsin to take on a Badgers team that was without two of its best players — guard Kobe King announced earlier in the week he was leaving the program while guard Brad Davison was serving a one-game suspension handed down by the conference — and whose coach, Greg Gard, was starting to feel the heat of an average season and a bad week.

Instead of jumping on a short-handed team that had lost three of its last four, No. 14 Michigan State had another miserable start, making just five of its first 22 shots while allowing the Badgers to get open look after open look.

Wisconsin took advantage, taking a 19-point first-half lead before withstanding a second-half rally from Michigan State and holding on for a 64-63 victory at the Kohl Center, ending the Spartans’ eight-game winning streak over the Badgers and leaving Michigan State a half-game behind Illinois for first place in the Big Ten. 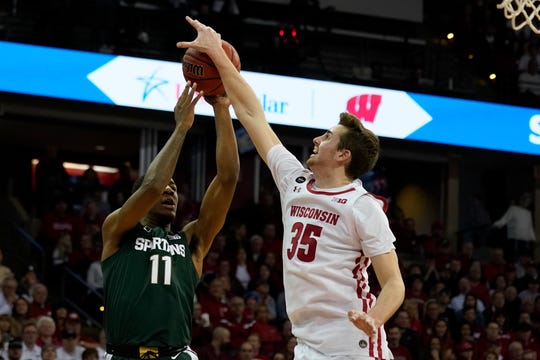 It was only the second time Gard has led the Badgers past the Spartans. He won the first meeting soon after he took over for Bo Ryan in 2016 but lost the next eight. This win, though, came at a critical time for the program.

Michigan State's Xavier Tillman and Cassius Winston try to explain another slow start on the road as the Spartans lost at Wisconsin. The Detroit News

Cassius Winston scored 23 for the Spartans (16-6, 8-3 Big Ten) while Rocket Watts added a career-high 16. That was it for offensive standouts as Xavier Tillman was limited to seven points on 3-for-15 shooting while grabbing 14 rebounds.

Tillman was plagued by missed layups, the two biggest coming in the second half after Michigan State was on a 17-2 run and had cut Wisconsin’s lead to 50-47. After forcing a turnover, Winston dished to Tillman who missed a right-handed layup that would have made it a one-point game. On the next possession, Tillman missed a contested layup from the other side of the basket and later couldn’t convert a lob pass from Winston.

“I felt so out of sorts today,” Tillman admitted. “It was crazy because in warm-ups I was hitting shots on a consistent basis and I'm feeling like, ‘OK, this about to be big night.’ I felt good. I think after Thomas (Kithier) threw me a baseline pass and I missed with my left I’m like, ‘OK, that did not feel good coming off my hand.” So, I knew it was gonna be a little tough after that.”

The second half played out much like Michigan State’s loss at Indiana when it dug a deep hole only to come back. In that game, the Spartans took the lead only to fail to build on that lead and allow the Hoosiers to rally.

On Saturday, Michigan State got close but never managed to get over the hump. It was within three when Tillman missed the two straight layups and got within four with 4:30 to play but missed its next six shots as Wisconsin put the game away at the line.

“We ran some good plays, we got some good looks, we just have to find a way to capitalize on it,” Winston said. “We kept getting stops, got the shots that we kind of wanted and things like that. Just gotta find a way to finish those.”

As frustrating as the finish was, it was nothing like the opening 20 minutes. Just seven minutes into the game, Wisconsin was up, 18-6, after a pair of free throws from Micah Potter. The Spartans pulled within 18-11, but missed their next eight shots as the Badgers reeled off an 8-0 run to take control. All eight points came from Reuvers, who converted a three-point play, nailed a pair of free throws then hit a deep 3-pointer.

A late surge from Watts that included three 3-pointers was about the only positive note for Michigan State, which closed the half by giving up another open 3-pointer, this one from Pritzl to give Wisconsin a 43-27 lead at halftime.

Michigan State coach Tom Izzo was impressed with Wisconsin as the Badgers jumped on the Spartans early and hand MSU another road loss. The Detroit News

“That's the shame of basketball,” Izzo said. “(Tillman’s missed layups) looks like why we lost the game. We lost the game in the first half because we guarded nobody. So then you give a team energy and the fan base energy. That's where the game is lost.”

Michigan State got rolling early in the second half, beginning with a Tillman layup followed by a Winston 3-pointer. Watts scored on two straight trips before Tillman converted on a dish from Winston, who then made a pair of free throws to cap 13 in a row for the Spartans. After Wisconsin scored for the first time in more than 6:30, Winston dished to Kithier for a layup, then hit a long jumper to pull the Spartans within 50-47 with 11:23 to play.

But Tillman missed two straight layups that would have given Michigan State the lead and Wisconsin took advantage, scoring seven in a row to push its lead to 57-47 with 8:13 left. Michigan State managed to push back, cutting the Badgers lead to 61-57 on a Kyle Ahrens 3-pointer with 4:31 to play.

Michigan State could pull no closer, however. Outside of two late Winston 3-pointers with the game essentially decided, the Spartans offense was finished, and so was the chance at getting a second straight road win.